New York: A painting by the British artist David Hockney fetched $US90.3 million ($123.7 million) at Christie's on Thursday night, easily breaking the record for a work by a living artist sold at auction. 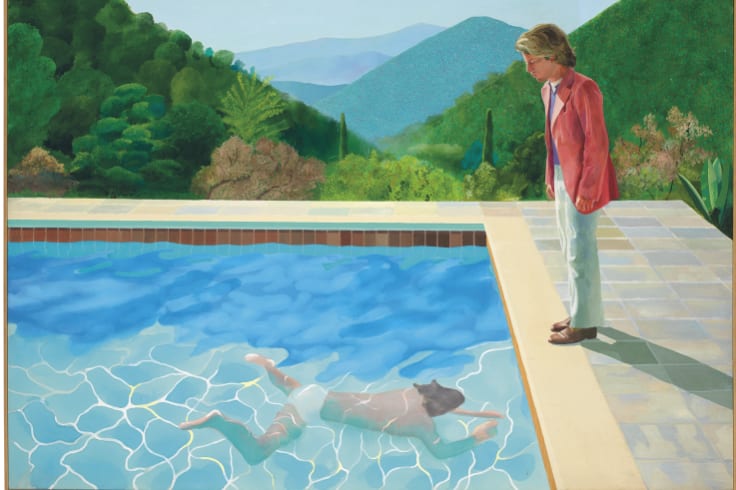 The painting, considered one of Hockney’s premier works, was sold at auction by Christie’s in New York for $US90.3 million ($123.7 million).Credit:Christie’s Images

Among his famous "pool paintings," Portrait of an Artist (Pool with Two Figures) is considered one of his premier works. The previous record by a living artist was set by Jeff Koons' Balloon Dog, which sold for $58.4 million in 2013.

The 1972 painting by Hockney, now 81, is "the holy grail of his paintings, from both the historical and the market perspectives," Alex Rotter, co-chairman of post-war and contemporary art at Christie's, said in September. He noted that it reflects both the European and the American perspectives of an artist who came to live in sunny California in the 1960s, and saw himself as living on both continents.

"It has all the elements that you would want in a Hockney painting," Rotter said in an interview. He noted that writers have referred to the swimming pool as being sort of a self-portrait of Hockney, though he never confirmed that, just saying he was fascinated to paint moving water.

The painting, whose buyer was not immediately revealed, had been long held by a private collector, widely reported to be Joe Lewis, a market-savvy British billionaire based in the Bahamas.

He audaciously offered his Hockney without reserve, meaning he set no minimum price, a sign of how confident he was that it would sell for its estimate of $US80 million, or more. He bought the painting in 1995 from entertainment magnate David Geffen. 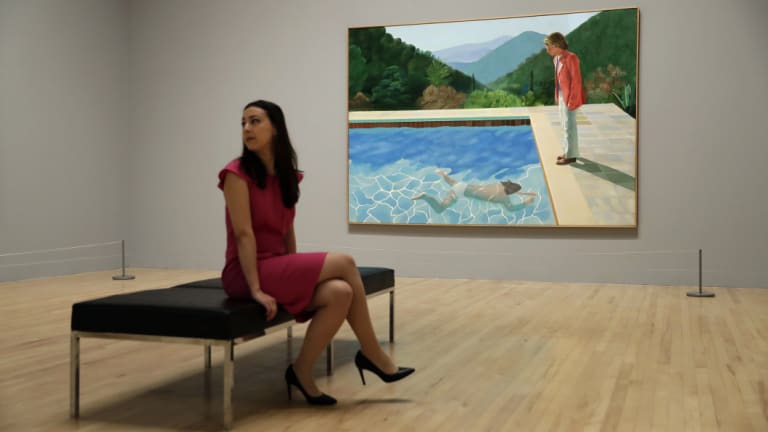 The price for the 1972 painting easily surpassed the previous high of $US58.4 million.Credit:AP

A depiction of two men — one swimming the breaststroke underwater, the other standing by the pool looking down — the painting was originally inspired, according to background provided by Christie's, by two photographs Hockney found juxtaposed on his studio floor, one of a swimmer in Hollywood in 1966, and another of a boy staring at something on the ground.

The rocky landscape is in southern France, and the standing figure is said to represent Peter Schlesinger, whom the artist met in 1966, when the younger man was a student in one of Hockney's art classes at UCLA. For the next five years, according to Christie's, he was both "the great love of Hockney's life" and one of his favorite models.

The relationship ended in 1971. Hockney had already begun the painting and he abandoned it, starting again the following year. 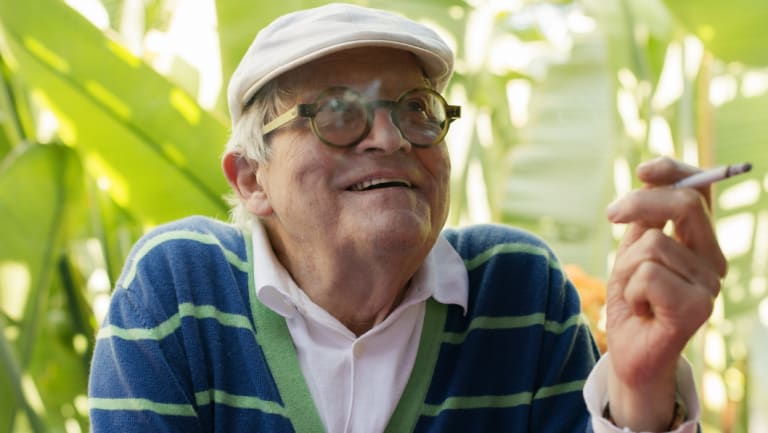 David Hockney on his deck at his home in the Hollywood Hills section of Los Angeles in 2017.Credit:The New York Times

Together the sales signalled a new inclusivity in the art world, driven by a generational shift toward artists who have been out of the mainstream and stratospheric prices for more established names. That has forced collectors to expand their search for emerging names who might be undervalued.

The new demand for living artists, coupled with a dearth of masterworks for sale, has given greater exposure for non-white and female artists, with more museums exhibiting them and several of their works notching multimillion-dollar sales.

The work went far towards boosting the success of Christie's post-war and contemporary art auction, which took in a total of $US357.6 million, with 41 of the 48 lots on offer finding buyers.

Other highlights included Francis Bacon's Study of Henrietta Moraes Laughing, which sold for $US21.7 million against a pre-sale estimate of $US14 million to $US18 million, and Alexander Calder's 21 Feuilles Blanches, which more than doubled its high estimate, selling for just under $US18 million.

Despite the snowy night, the salesroom at Christie's Rockefeller Centre headquarters was full and many in attendance raised their phones to film the sale of the Hockney. In addition to the usual heavy hitters in the crowd — collectors like Peter M. Brant, Martin Margulies and Alberto Mugrabi as well as dealers like Larry Gagosian and Christophe Van de Weghe — actor Jake Gyllenhaal was in the third row, though he did not bid on the Hockney.

Offers quickly reached $US70 million in a flurry of bidding among three people in the room and five calling in. The competition came down to two phone bidders and lasted nine minutes before the hammer came down to a round of applause at $US80 million, or $US90.3 million with fees. The buyer, as is customary, was not identified. 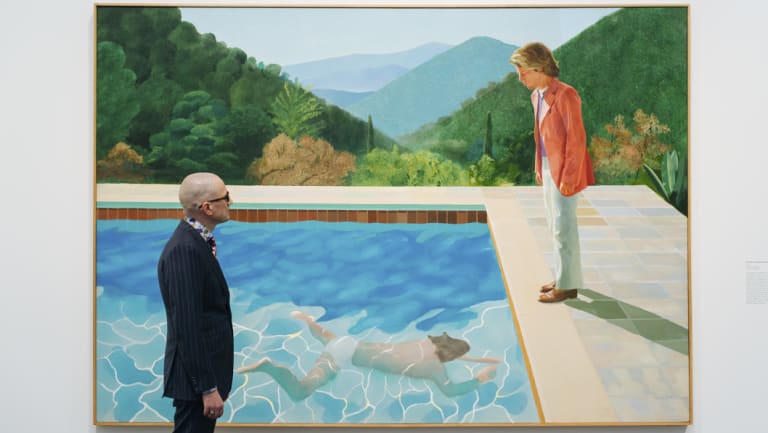 A viewer looks at David Hockney’s Portrait of an Artist (Pool with Two Figures) at a retrospective exhibition last year.Credit:The New York Times

Hockney, a multi-talented painter, draftsman and set designer who burst onto the British art scene in the early 1960s, has become one of the most popular living artists, though his work was not always taken seriously. His colours were too bright, his figures too realistic — the octogenarian Hockney even described his younger self as a "peripheral artist, really".

But he is enjoying a commercial and reputational renaissance, thanks to three recent retrospectives, including one at the Metropolitan Museum of Art and another at Tate Britain that broke museum records. And at 81, though he has lost his hearing, he continues to paint and experiment with digital art.

Auction prices for work by Hockney, who declined to be interviewed, had achieved a new bench mark in May, when his joyously coloured 1990 landscape, Pacific Coast Highway and Santa Monica, sold for $US28.5 million. It was only 2016 when his works broke the $US10 million barrier.

The much-reproduced Portrait of an Artist (Pool With Two Figures) was one of the Met show's most admired paintings. Yet, despite its familiarity, this sun-drenched hilltop scene of a pink-jacketed young man standing by a pool, gazing down at a swimmer submerged in the wobbly blueness below, remains one of the artist's most mysterious works. 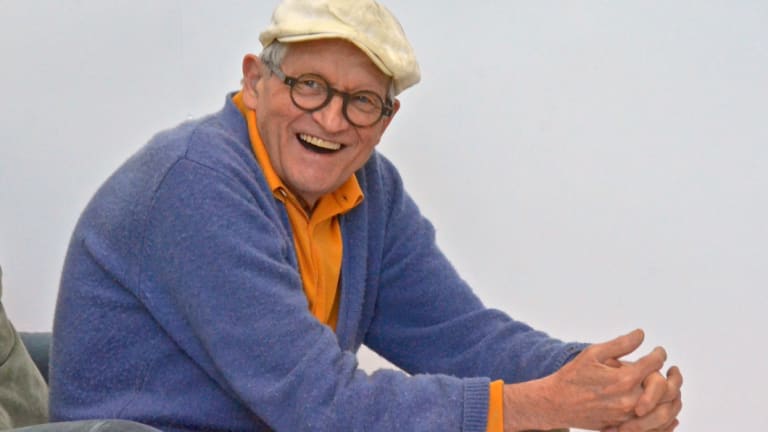 Ian Alteveer, who curated the Met's Hockney show, said he singled out the painting in the show's catalogue because it signaled a shift in the artist's portrayal of water — from a distinct splash to a watery soaking of the canvas — and it signaled the "culmination" of Hockney's double portraits.

"It's also a farewell to the relationship, which had come to an end," Alteveer added, "and this grand statement about his interest in the psychology between two people that he's been trying to capture."

The painting drew huge interest during the pre-sale viewing in Christie's Rockefeller Centre showroom. "I'm only here for this," said Post Villafane, 32, a young collector from Queens who viewed the painting on Wednesday.

Villafane was not in the league of would-be bidders, but he was representative of a noticeably younger and more diverse crowd mingling with the usual middle-aged white art world insiders at this week's pre-sale showings. "The colours are so realistic," he said. "They blend so well. Look how the paint shimmers. It's beautiful."

In reviewing the Met show, New York Times art critic Roberta Smith described the artist's "pictures of homosexual love and comradeship" from the early 1960s as "courageous," given that they were made at a time when homosexuality was a criminal offence in Britain. "They should be a revelation to younger generations," she added, "including painters using figurative styles to tell their own stories."

Works from five African-American artists, two of them living, hit new highs at Christie's and the Sotheby's sale the night before. On Thursday night, Cultural Exchange by Robert Colescott, the first African-American to represent the United States at the Venice Biennale, sold for $US912,500, nearly triple his previous record. Lady Day II by Sam Gilliam, the 84-year-old colour field painter, sold for $US2.2 million, almost twice his earlier high.