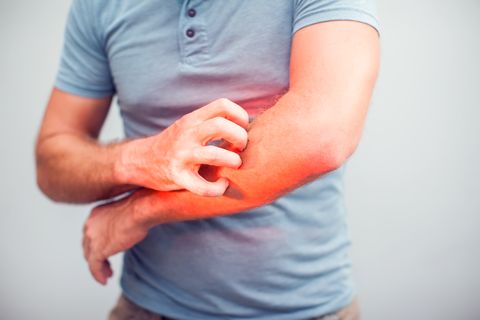 The keto diet is actually all the rage right now (just ask Jenna Jameson)—and while it can definitely lead to weight loss, it can also have some…less than pleasant side effects (hi, keto flu, diarrhea, and keto breath).

Now, apparently there’s another one to add to that list: keto rash…and it sounds even worse than walking around with breath that smells like acetone.

Hold on, keto rash? What the heck is that?

The keto rash—a.k.a. prurigo pigmentosa—is an uncommon inflammatory disease that’s often characterized by red, itchy bumps on the neck, back, and stomach, according to a literature review on the condition in the American Journal of Clinical Dermatology.

While the rash’s exact cause is unknown, it can be associated with ketosis (the state during which your body burns fat for fuel instead of carbs—and the namesake of the keto diet). Some people are also more likely to develop the rash than others—it’s actually seen most often in Asian women in their twenties and thirties, according to the same literature review.

The keto rash is actually often mistaken for eczema, says Joshua Zeichner, M.D., director of cosmetic and clinical research at Mount Sinai Hospital, showing up as itchy, red, raised bumps on your neck, arms, armpits, chest, and back. Over time, the rash’s bumps can become brown or pigmented, adds Zeichner.

So how can the keto diet cause the keto rash?

The keto diet doesn’t necessarily cause the rash—it has just been linked to people who are in a state of ketosis, which can cause changes in your gut, says Zeichner.

“The thought is that an alteration of the gut microbiome—a.k.a., the collection of normal bacteria living in our gut—causes inflammation throughout the body leading to an immune response in our skin and the development of this rash,” says Zeichner.

Eating keto isn’t the only way to experience ketosis, though; people who are dieting, fasting, or managing diabetes may be more likely to have elevated ketone levels as well. Cutting carbs, no matter what diet you follow, may also lead to ketosis.

Still, with more people following the keto diet, there’s an increase in anecdotal accounts of the keto rash, though the condition is still considered to be very rare. Currently, there’s not enough research to understand why only certain keto-eating people are susceptible to the rash, says Zeichner.

So…how can I get rid of the keto rash if I have it?

Sometimes the keto rash goes away on its own, but if you’re experiencing any kind of rash that hasn’t gotten better within two weeks, it’s time to see your dermatologist, says Zeichner—and they can treat your symptoms depending on the diagnosis.

If your derm suspects keto rash—which, again, is pretty rare—they might suggest introducing more carbs back into your diet, says Zeichner.

This did the trick for one 43-year-old woman who started the keto diet to lose weight, according to a case report in the Hawaii Journal of Medicine & Public Health. After experimenting with a few treatment plans—cutting out nuts, switching shampoos and applying creams—she only found relief after bringing carbs back into her diet.

In a different case report in the journal Case Reports in Dermatological Medicine, a 31-year-old woman experienced itchy bumps on her back, neck and chest. The woman was observing Ramadan (a holiday during which strict fasting is observed), and when the holiday fasting was over, the rash disappeared, too.

From: Women’s Health US