Sometimes the act of cooking can be full of pure joy. The chopping! The seasoning! Watching a delicious feast come to life before your very eyes!

And then there are those days when the thought of simply slicing an onion, much less standing by the stove, can fill you with absolute dread. We get it.

So Insider asked Michelin-starred chefs to share their favorite recipes that require barely any prep, along with their tips and tricks so you can re-create them at home.

From a mouth-watering steak with chimichurri to a pan con tomate that will transport you to Spain, these delicious low-prep dishes will have you speeding out of the kitchen — and straight to the dinner table.

A bowl of miso soup with rice will warm you up in no time at all. 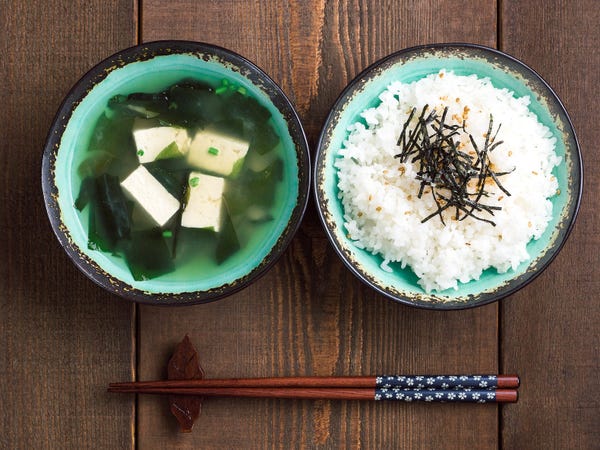 "Rice and miso soup is one of the fastest dinners you can make," Val Cantu, the head chef at Californios in San Francisco, told Insider. "It's always a favorite, and still feels like a nice meal."

Cantu said the trick is to make sure you strain the miso after putting your paste into the soup.

"Also red miso (versus white miso) is totally worth switching to," he added. "White miso is what everyone starts with because it feels safe, but red miso is so much more flavorful and robust."

And when it comes to the rice, Cantu recommends adding a fried egg on top or using the leftovers in your fridge to spice it up.

You can cook a perfect steak in 10 minutes, and it won't take much effort to whip up a delicious chimichurri sauce to go with it. 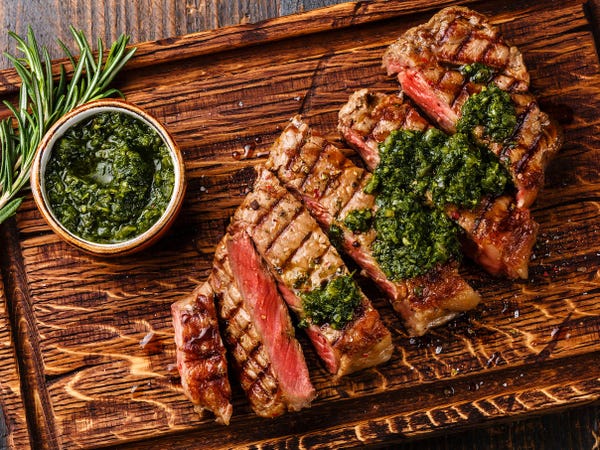 Cantu told Insider that chimichurri is one of his favorite "easy and super fast condiments" for steak.

"I'll do parsley, cilantro, serrano peppers, and shallots with red wine vinegar or sherry vinegar," Cantu said. "And mix it with olive oil, salt, probably the zest of one lemon, and then the juice of that same lemon."

To make the perfect steak, Cantu recommends using a grill basket and putting it right on the coals to cook your protein.

"Cook the steak on one side for 10 seconds, flip it, and then do that for all the sides," he said. "Let it rest for a couple of minutes while you relax, then do that same process again. The second sear will start to caramelize it."

Once you've done all the sides for a second time, let your steak rest again and brush it with some soy sauce. Repeat the process one more time for a "perfect medium rare," or two more times if you prefer your steak medium.

"In this final sear, you're looking for caramelization," Cantu said. "The soy sauce will help, and leave it nice and salty."

Many Michelin-starred chefs turn to salmon when they need a quick and easy dinner. 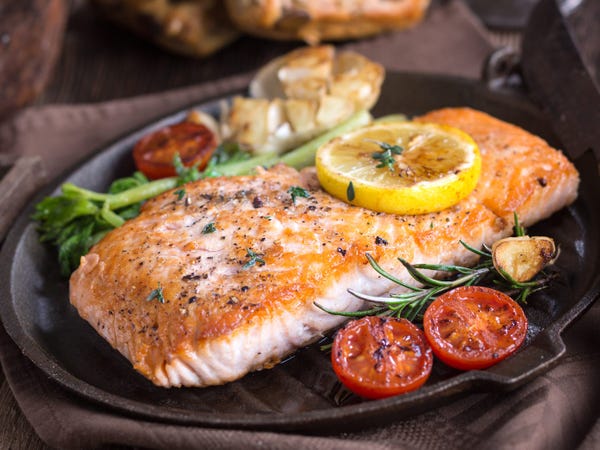 Mazen Mustafa, executive chef at Fellow in Los Angeles, will often whip up roasted salmon with grilled veggies and a soy-honey glaze.

"This is a go-to favorite in my house," he said. "I love the simplicity of the dish. The honey and soy work great with the salmon and almost any vegetable combination you can come up with."

Mustafa recommends cooking your salmon skin side down in a cast iron pan on medium heat.

"Once the salmon is cooked on the skin side nearly 70% of the way, flip it to kiss it on the flesh side," he added. "Then remove and rest it on a plate lined with paper towels for two minutes."

To make the glaze for four fillets, add 150 grams of soy sauce, 50 grams of olive oil, 40 grams of honey, and 25 grams of sherry vinegar. Mix it all together, then use the glaze to dress your salmon and veggies.

Australian chef Curtis Stone — who runs Maude and Gwen in Los Angeles — loves making a citrus-based reduction for his salmon.

"Start with a lemon juice, white wine, or vinegar, something acidic," he said. "Whisk a little butter through that, and that's delicious and really simple."

Beverly Kim, of Parachute in Chicago, will bake her salmon in the oven — and it only takes 10 minutes.

Kim puts her salmon in a baking pan with herbs (she recommends rosemary, thyme, and parsley), shaved lemon slices, and avocado oil or olive oil, and cooks it at 325 degrees Fahrenheit.

"Sometimes when you bake salmon it gets dry, but this is super moist," Kim said. "The warming of the oil makes the salmon more fragrant."

Get a taste of Spain with a few slices of pan con tomate. 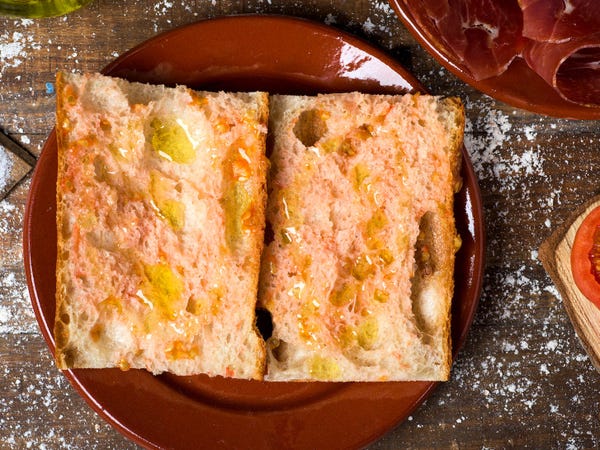 This classic Spanish tapa only requires four simple ingredients, which you probably already have in your kitchen.

"It's insanely simple and one of my favorite things to make," Chris Morgan, who recently opened Bammy's in Washington, DC, told Insider. "And I make it a lot because I always have leftover baguettes at my house."

Just make sure the bread you're using isn't fresh.

"Stale bread works better," Morgan said. "It actually became a famous dish in Spain because bread was always in production and people were having a hard time utilizing all of it."

To make pan con tomate, Morgan toasts his bread and rubs a clove of garlic on it to "break the essence of the garlic all over it."

He then makes the tomato mixture, using a food processor to break up raw garlic and fresh tomatoes — which he seasons with a few pinches of salt and some olive oil.

"Simply spread that really seasoned tomato mix over the bread and eat it as it is," Morgan said. "It's really good to eat side-by-side with charcuterie, cheese, or salad, but it's also a great meal on its own."

You don't need a lot of time to make a pasta dish that looks — and tastes — fancy. 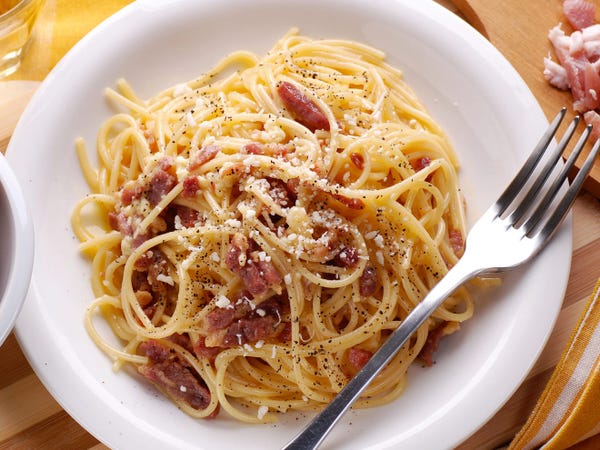 "I'm a big fan of pasta carbonara," Andrew Zimmerman, the executive chef of Sepia in Chicago, told Insider. "It's a very easy, satisfying, and rich pasta dish that you can make with ingredients that are very available."

All you really need for pasta carbonara are eggs, pancetta, black pepper, and cheese.

"And if you want to substitute the pancetta with bacon, that's cool too," he added.

Zimmerman also loves making spaghetti aglio e olio, which you can whip up in just 15 minutes.

"I keep pickled Calabrian chilis in my fridge all the time because they're delicious," he said. "And they give the pasta a little more oomph and character."

Or impress your family with homemade pasta that will taste fresh, but barely require any prep. 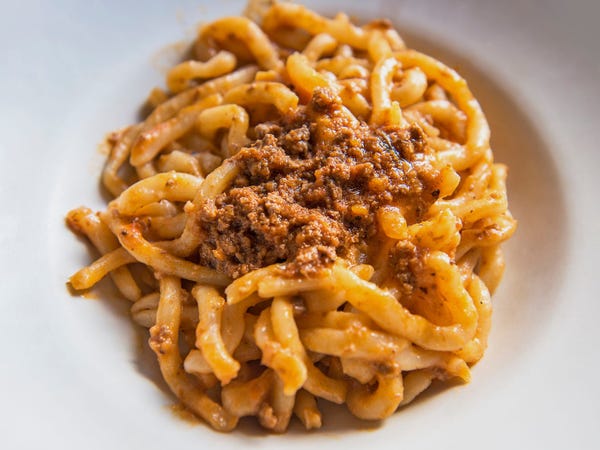 Brad Carter, of Carters of Moseley in Birmingham, England, told Insider that pici pasta is one of his favorite things to make for the staff dinners at his restaurant.

"It's amazing, it's just flour, water, oil, and salt, it's really quick to make," he said. "You can have dinner within 40 minutes. The only thing you're waiting for is the resting time on the dough."

And you don't need an expensive pasta machine to shape your noodles.

"You cut the dough with a knife and roll it with your fingers, almost like misshapen, wiggly worms," Carter said. "Then you're basically blanching your noodles in water or cooking them in a sauce.

"It's simplicity and authenticity," he added. "You can make the dough from scratch and it shows that you don't have to buy dried pasta all the time. You can make something yourself very easily, and feel that satisfaction."

You can transform that extra kale in the fridge into a delicious salad with just a few simple ingredients. 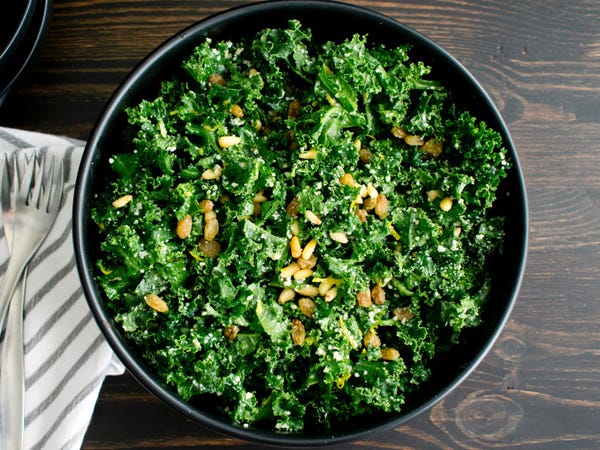 Kim told Insider that this dish tastes just like a Caesar salad, but can be made vegan-friendly.

"You make a dressing with black pepper, mayonnaise, lemon juice, a little minced garlic, and dried yeast," she said. "Dried yeast has this cheesy flavor and tastes like Parmesan, but there's no dairy — and you can get it at Whole Foods."

"It's super easy to whip up, and usually you have those products on hand," she added. "You just mix it all with the fresh kale, and it's just really delicious."