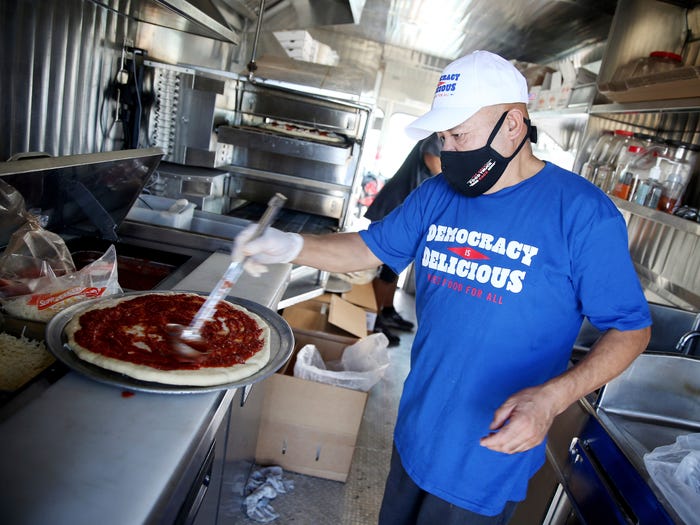 Many voters in this year's election were met by long, winding lines at polling locations nationwide.

In a year of record voter turnout, both on Election Day and during early voting, some Americans waited as long as 11 hours to cast their vote.

Enter: Pizza to the Polls, a nonprofit, nonpartisan organization founded in 2016 with the mission of feeding hungry voters waiting in line to vote. This year, the group raised more than $1.4 million to send more than 66,000 pizzas to voters across the country.

"Having delicious food dropped off without having to think about it was a terrific morale boost," poll worker Jennifer Cunningham, who received pizza in Northampton County, Pennsylvania, told Insider. She added, "It was also amazing to hear it was from across the country … [It] reminded us that our work matters beyond our little precinct here."

Co-founders Scott Duncombe, Noah Manger, and Katie Harlow, from Oregon, wanted to help. In just a few hours, Pizza to the Polls was created with a Twitter handle, a website, and an ambitious plan to feed voters across the country. Their goal was simply: "Give pizza to the people. And give people watching at home a way to help."

To report a long line, people were asked to submit photos of crowded polling locations to Pizza to the Polls' Twitter account or use the submission form on the organization's website. A volunteer then verified the line and contacted a local business to deliver the pizza. The pies were paid for by donations, which Pizza to the Polls collected on its website. That year, they raised $43,307.

After the group delivered their first pizzas, the feedback was overwhelmingly positive.

This year was Pizza to the Polls' biggest year yet — they sent pizzas to more than 3,200 polling places

After delivering food to voters and poll workers on Super Tuesday, Pizza to the Polls officially began delivering pizzas to polling places for the 2020 election in late September as early voting locations began to open.

Duncombe said donations spiked earlier than usual this year and peaked at almost $500,000 on Election Day. "That was a big indication to us that people were excited and nervous and wanted to make sure people were taken care of at the polls," he said.

On average, the pizzas took around 90 minutes to be delivered to polling stations, and people were able to volunteer to hand them out on the organization's website. According to Duncombe, the average individual donation to help cover the costs was around $40.

Extra preparation was taken this year due to the coronavirus pandemic. Pizza to the Polls contacted poll workers who knew about the organization and could help manage and distribute deliveries during election season, Duncombe said. Next, they had to figure out a way to make the program safer, more easily managed, and convenient in urban areas.

The organization landed on the idea of bringing food trucks to 25 — later raised to 29 — cities across the country to ensure urban voters could receive food quickly, safely, and all for free. They partnered with restaurants to provide the food.

The members of Pizza to the Polls will now be discussing what worked this year and what didn't so that they're ready for the next election.

"We're not going anywhere," Duncombe said. "We'll be sending pizzas wherever there's a line. Hopefully, that eventually isn't a problem, but at least for now, we'll be around to send pizzas and bring some joy to the election season."