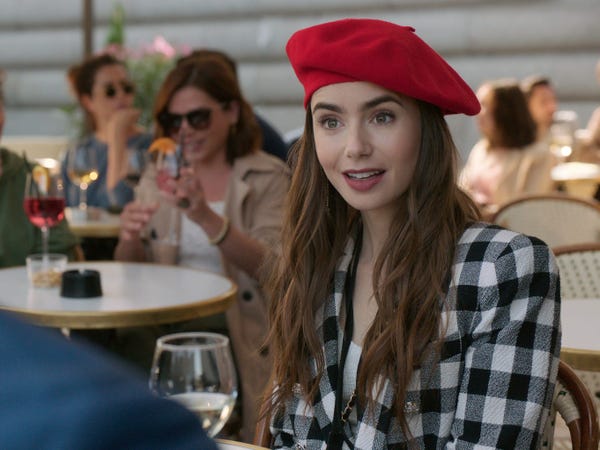 The show's first episode follows Emily Cooper (played by Lily Collins) as she relocates from the windy city to Paris, France, for a job. At around the 10-minute mark, Cooper is introduced to a company executive and tries to make a good first impression. When he mentions he's been to Chicago before and has tried deep-dish pizza, Cooper nearly squeals with excitement.

"That is our specialty!" she says. "We take a lot of pride."

Her elated expression disappears when the man calls it disgusting and likens the pie to "a quiche made of cement." To that, Cooper replies, "Oh no, you must have gone to Lou Malnati's."

And the team over at Lou's noticed. They took to Instagram on Wednesday to first respond to the jab with the caption, "Emily in Paris thinks Lou's sucks. We disagree. Try it for yourself. Hate it? #movetoParis 🍕"

As a follow-up, the restaurant posted another photo with a longer caption that called the comment "heartless" in light of the COVID-19 pandemic.

Quoting owner Marc Malnati, the next caption read: "We've been serving Chicago's favorite Deep Dish since 1971. When Netflix's 'Emily in Paris' writers chose to take a shot at Chicagoans and our pizza to try to get a laugh, it felt heartless and not humorous in the midst of COVID-19." (Us Weekly's Erin Crabtree notes that the show was filmed over a year ago, months before the coronavirus outbreak hit the US.)

“We've been serving Chicago's favorite Deep Dish since 1971. When Netflix’ Emily in Paris writers chose to take a shot at Chicagoans and our pizza to try to get a laugh, it felt heartless and not humorous in the midst of Covid-19.” – Marc Malnati Thank you to all our fans who have shown so much love and support! . To say “merci” for keeping us #ChicagoStrong we're giving you $5 off a Tastes of Chicago shipped 4 or 6 pizza pack! Place your order by Wednesday, October 14th and use code TCXCHISTRONG at checkout. Shop through the link in our bio! . . . #shipapizza #pizza #chicagostylepizza #chicagoeats #pizzaislife #loumalnatis #tastesofchicago

The first Lou Malnati pizzeria opened in 1971, according to the restaurant's website. Ownership has remained within the Malnati family since its founding and, according to the company, nearly 25% of their full-time staff members have been with the company for more than 10 years.

The restaurant flipped the negative comment into a business opportunity by offering $5 off their Tastes of Chicago pizza packages, which ship nationwide, as a thank you to loyal customers. (At the time of writing, this offer is set to expire on October 14.)

By Thursday, the Lou Malnati's team apparently cooled off a bit and called a truce on the social platform, even offering to send Collins their fan-favorite pizza.

Thanks for the Lou's love, everyone! ❤️ We’ve simmered down some and we’re thinking this might have been one big misunderstanding, right @emilyinparis? You too, @lilyjcollins, we know you were just delivering your lines, so no hard feelings. Let’s call it a truce over some deep dish. Tell us where to send it! 🍕 . . . #emilyinparis #chistrong #teammalnati #deepdish #chicago #chicagostylepizza #loumalnatis #chicagostyledeepdish #legendarydeepdish #pizza

"We've simmered down some and we're thinking this might have been one big misunderstanding, right @emilyinparis?" the caption read. "You too, @lilyjcollins, we know you were just delivering your lines, so no hard feelings. Let's call it a truce over some deep dish. Tell us where to send it! 🍕"

A representative for Lou Malnati's told Insider that the pizzeria has not yet heard back from the actress or from Netflix.