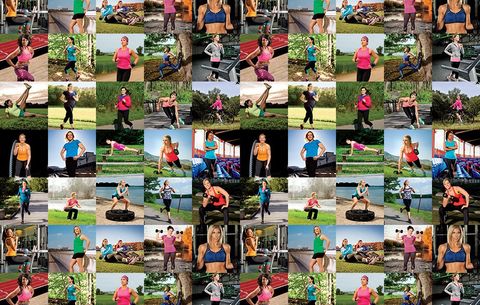 There’s no doubt that enlisting a trusted registered dietitian is the way to go when you’re attempting to make a big change to your lifestyle.

But you know who else has some pretty damn applicable tips when it comes to dropping pounds? People who have actually done it themselves.

Here, 23 different women share tiny tricks that helped them lose weight (and keep it off).

Bags of chips. Tubs of pretzels. Extra Halloween candy. Get rid of anything that’s a weak spot, especially any foods you’ve binged on in the past. “If you know you’ll break into the leftover birthday cake at midnight, toss it immediately,” says accountant Brandy Thele, who lost 130 pounds after she was diagnosed with type 2 diabetes.

Instead, swap “forbidden” foods for healthier replacements. Rather than swearing off dessert entirely, for instance, indulge in fresh fruit after meals. And if your partner or kids balk at your chucking the ice cream, hide it behind the frozen edamame so you don’t glimpse it every time you open the freezer.

Keep a food diary and include everything (yes, that bite of your toddler’s mac and cheese counts) so you can see where the calories come from. Day-care manager DJ Gray wrote down what she ate and tracked her calories with the SparkPeople app on her way to losing 115 pounds.

Social media can be a powerful motivator to stick with your plan and make progress; Christina Donatella, now a personal trainer, set up a Facebook page about her diet and exercise regimen and dropped 180 pounds.

Are you caught up on Jenna Jameson’s weight-loss journey?

So many dieters underestimate how much they’re eating. Tools and gadgets can help: Teacher Jen Punda downloaded the MyFitnessPal app to help her gauge serving sizes and shed 91 lbs; stay-at-home mom Krystal Sanders bought a portion-control plate, which taught her to eyeball healthy servings of protein, veggies, and starches.

Research shows that people who prepare most of their own meals consume fewer calories, carbs, sugar, and fat than those who cook rarely. If you insist you’re too swamped, try this trick from paralegal Jessie Foss, who lost 100 pounds: On Sunday, whip up a big batch of something healthy, like soup from a slow cooker, and eat it throughout the week.

Fiber expands in your stomach and also takes time to digest, both of which help keep you feeling full for longer. Good sources include whole grains, veggies, and whole fruit (not juiced). Healthy fats like olive and nut oils—in moderation—improve flavor, give you energy, and help your body use certain nutrients. Alexandra Shipper added healthy fats, such as avocado, to protein sources like eggs and fish on her way to dropping 55 pounds.

7. Don’t feel obligated to go to the gym.

When you’re at your heaviest, it can be intimidating to step into a gym and begin running or lifting among the spandex-clad. Working out in your own space is also simply easier to schedule—you can lift weights while the baby naps or first thing in the morning without dragging yourself out the door. “I bought an exercise bike so I can work out whenever I want,” says Sarah DeArmond, who lost 100 pounds.

8. Work weights into your exercise routine.

To drop serious lbs, you need the one-two punch of aerobic exercise plus strength training. Resistance helps build and preserve metabolism-boosting lean muscle while burning fat and is especially key when you hit a plateau. Amanda Green lost 15 pounds in two months doing hour-long cardio DVDs, but it wasn’t until she started running outside and lifting weights three times a week that she was able to ditch the last 15 of her 30-pound goal.

9. Challenge yourself by signing up for a race.

Jessica McMullin signed up for her first race, a 5K walk-run, hoping a challenge would help motivate her to lose weight—which it did, way more than she could have imagined. “I absolutely fell in love with running, it changed my whole life,” she says.

Not only did it help her lose 60 pounds, but making it a daily habit also helped her overcome her depression. Now she stays motivated by continuing to challenge herself with new race goals. To date, she’s completed over 100 different races.

10. Don’t swear off your favorite treats for good.

Little treats keep you from feeling deprived, so every day, allow yourself a bit of something you love (aim for 150 calories each). This kind of moderation is the difference between a “diet” and a lifestyle you can stick with forever. For salon owner Caitlin Gallagher, who lost 125 pounds, that meant replacing her nightly bowl of ice cream with a square of chocolate; social worker Brittany Hicks, who lost 100 pounds, started baking mini versions of her favorite pies.

11. Always make sure you have a plan.

When going out to dinner, follow the lead of police officer Larissa Reggetto, who dropped 105, and look up the menu beforehand to avoid impulse ordering.

“I don’t eat any treats or processed foods until I’ve filled my veggie quota.”

Too much variety in your diet can mess with your satiety cues and make you overeat, so add some (tasty) monotony to your routine. One easy way: Eat the same healthy breakfast and/or lunch each day during the week, and savor new tastes on the weekend. The best thing about that plan, says 69-pound-loser (er, winner?) Melanie Kitchen: “I didn’t have to keep coming up with new recipes!”

13. Have a positive weight-loss mantra.

When Katrina Plyler made the decision to take control of her weight, she decided to try the Whole30 as a way to reset and commit to her goals.

“That first day was so tough, I almost caved and reached for the vending machine at work but I remembered a quote I had on my Facebook page that said ‘The only thing standing between you and your goal is the bullshit story you keep telling yourself as to why you can’t achieve it’ and that was enough to make me turn away from the machine,” she says.

She completed the entire month of the Whole 30 and stuck with a clean Paleo-style diet afterward. Within a year she was down 46 pounds. “I always keep that quote nearby and reread it when I’m feeling weak,” she adds.

14. Look for things to add to your life, not subtract.

Starting a weight-loss journey can be tough, especially if you’re giving up a lot of things you love. Shannon Hagen’s secret to staying positive while losing weight? “I never think of it as giving things up, that makes me feel deprived,” she says. “Instead I focus on adding in one small healthy change at a time, until it becomes a habit.” For instance, instead of being bummed over not having your usual bowl of ice cream before bed, try a new healthy dessert recipe to add to your file.

Chronic migraines were what first inspired Amanda Tagge to start exercising. “I was hoping to find some relief from my headaches and working out did help but I realized that if I really wanted to feel better I needed to revamp my health habits overall and lose weight,” she says. The more she changed, the better her headaches got and she lost 70 pounds in the process which helped her feel even better. Focusing on all the ways her health was improving kept her going even when the scale wasn’t moving.

“I have one heck of a sweet tooth, and so I have to refuse to bring candy, cake, or sweets into the house, period.”

16. Keep track of your fruits and veggies.

Snacking is the key to Mary Rogerson’s 60-pound weight loss but it’s not just how often she eats but what. “I aim to eat at least seven servings of vegetables a day, along with some protein, every few hours,” she says. “And The best part is that by the time she’s loaded up on her rainbow of produce, she’s usually too full to eat much else and her cravings for sweets have gone way down.

17. Drink something refreshing as soon as you wake up.

“Every morning I drink a cup of warm water with half a lemon squeezed into it, a teaspoon of apple cider vinegar, and a dash of cayenne pepper,” says Michelle Keough. This helps her start her day off on a healthy note while getting her hydrated after a long night. This trick, combined with eating meals built around protein and veggies, helped her lose 20 pounds and keep it off.

Connie Jory swears by intermittent fasting—eating during a specific window of time, like from 10 a.m. to 6 p.m. eating at all.

“At first it was tough to adjust to but I’ve found that if I stick to only eating within my set window, the hunger pangs go away and I don’t even think about food.” This intermittent fasting approach has helped her lose more than 70 pounds.

“I have one heck of a sweet tooth, and so I have to refuse to bring candy, cake, or sweets into the house, period,” say Lin Williams, who’s lost 105 pounds. Instead, if she wants a treat she has to want it bad enough to get up, get in the car, leave her home, and go to the store—a process that rarely feels worth it. And on the rare occasion she does indulge? “I get exactly what I want and enjoy every bite of it!” she says.

20. Use a loved one as motivation.

Finding the motivation to exercise and lose weight was tough and as a busy mom Sabrina Winder could never seem to find the time. But when her son decided to do a cycling merit badge for Boy Scouts, suddenly helping her child meant helping herself too.

“My excuse used to be that I didn’t want to leave my kids alone to exercise, but this helped me see I could still do it and just include them,” she says. Now she’s losing weight and getting fitter while setting a healthy example for her kids. “It’s a win-win for our whole family,” she adds.

“My dad is like a food-pushing wizard, he’s always pulling stuff out of his pockets or showing up with delicious food,” says Mary Mock. While the family tradition of surprise sweets was fun, when it came time to lose weight, she knew she had to put a stop to all that temptation. “At first, he seemed hurt when I kept saying no but when I explained it was for my health, he got on board. Sometimes I still have to remind him though!” she says.

22. Find ways to treat yourself without food.

Making the connection between her anxiety and her food cravings was a game-changer for Kelly Walker. “I realized that by the end of the day, I just wanted something to calm me down and so I’d binge on chocolate,” she says.

“About a year ago, I started trying to find other ways to deal with my anxiety besides eating, like taking a bath or doing acupuncture.” She’s lost over 40 pounds but the best part is that she feels more relaxed than she’s ever been. “It turns out that eating all that sugar was making me even more anxious, making a vicious cycle.”

23. Make your fridge a “healthy snacks only” zone.

Having a healthy option at your fingertips when you’re starving can make all the difference between sticking to your goals and giving in to temptation. “I keep little containers of hummus and carrots, pickles, nuts and dried apricots, salsa and rice crackers, and other healthy combos in the front of my fridge and pantry so they are literally the first thing I see when I open the door,” says Lita Moreno. “I don’t even give myself a choice to cheat.” This one little change has helped her drop almost 80 pounds.