On Tuesday, Feb. 26, the second day of Paris Fashion Week, the city will wake up to 4,000 posters of Carine Roitfeld. The placards show her completely naked, leaning over a balcony and making a peace sign with one hand.

They will be placed in hot spots all over the city. No model, fashion editor or tourist will be able to escape them. A team has been hired to put up new posters if the first ones are vandalized or covered up.

Ms. Roitfeld, 64, has long been a ubiquitous force during the shows here. As the editor in chief of Vogue Paris for 10 years and, later, the founder of CR Fashion Book, she was a front-row regular. Her parties are known for being the most exclusive and elaborate, attracting celebrities like Lady Gaga and Kim Kardashian West.

But in those roles she was still somewhat in the background: an editor and influencer, not the main event. Now that’s about to change.

The posters are intended to introduce, teasingly, Carine Roitfeld Parfums, a collection of seven “genderless” fragrances inspired by seven fictional lovers from seven cities around the world. “We had to build everything ourselves, to make the juice,” Ms. Roitfeld said. “Usually people do this as a collaboration but I didn’t. I hope people buy it.”

They will retail for $285 apiece on Net-a-Porter beginning Monday, May 6 (coincidentally the same day that her rumored longtime rival, Anna Wintour, hosts the Met Gala). Ms. Roitfeld hopes the perfumes will be the beginning of a long line of products that will perpetuate her personal brand and legacy.

Tell us about the teaser posters. Are you ready for your nude photo to be all over Paris?

The photo was actually taken as a joke. It was two years ago, and my daughter was just taking photos of me for fun. But then I thought it might be perfect for this. I asked my son and business partner, Vladimir, if it was O.K., because sometimes I go too far.

I like to push. I’m not afraid. I’m following in the footsteps of some notable perfumes. Opium by Yves Saint Laurent. To call something Opium today would be forbidden. Look at Tom Ford; he had naked people in all of his pictures. A lot of people refused to put it in the magazine, but with French Vogue we did. I love the aesthetic.

What is the best and worst thing somebody could say about it?

The best thing somebody could say about it is you have a good body or you are fearless.

If they say “I don’t like your butt,” I don’t care. When you become a public figure you get so many butt comments on Instagram. But I don’t want anyone to think I’m pretentious. Of course I’m a bit of an exhibitionist; that I will accept. But if someone says: “Who do you think you are?” That I would not like.

Do you have a favorite Paris Fashion Week memory?

For the 90th anniversary of Paris Vogue we held the first masked ball. I copied it after the Truman Capote ball, and I tried to be at that level; I think we beat it. The girls wore the most eccentric dresses. It was a dream, dream, dream party. Lara Stone had a huge mask on for the cover of the issue, and Philip Treacy left with a big poster of her at 2 a.m.

Then when I launched CR Fashion Book at Raspoutine, a nightclub, we had a vampire ball. It was so exciting because everyone came for me not just because I was with Vogue. It made me happy because you don’t know if you will disappear.

I remember John Galliano called me on the phone before the party and said he can’t be there, but he might be the vampire that comes and bites my neck at midnight. 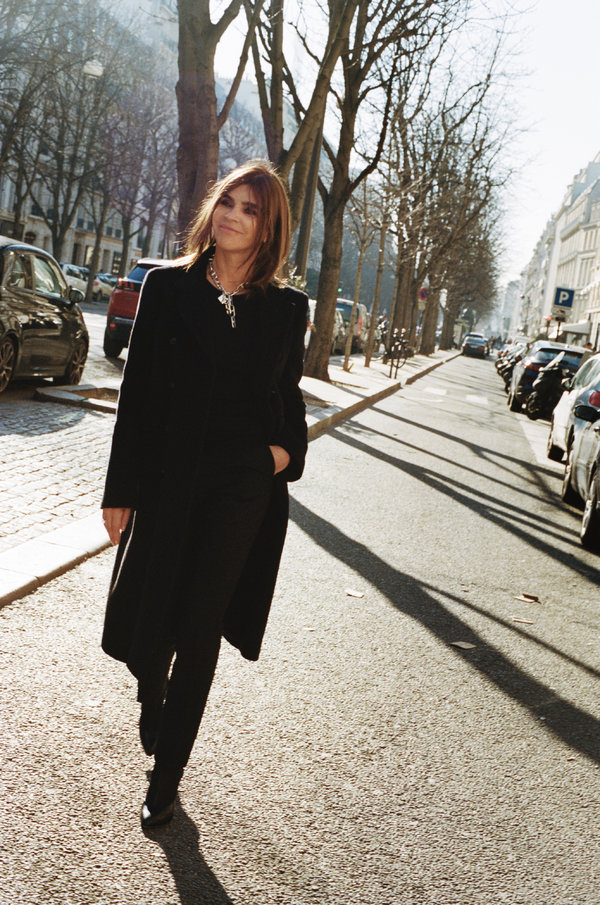 What are you most excited about this year?

What will be the best show? I cannot say that, I have too many friends in fashion. But of course Chanel is always a dream. Paris Fashion Week is the greatest. I’m so happy to be home. I know people, and we are speaking French. It’s great.

But of course Paris has changed a lot, and it’s now very young and international. Before people looked like they were attending a meeting of Congress. Now the new kids come in crazy dressed, and it’s much more fun to look at.

Why did you decide to do a perfume?

I did a lot of collaborations, a lot of magazines, but it was always something transient. If you don’t like a magazine, thank God, there is another one coming out in three weeks. But for me perfume is a way to have a legacy. Like Miss Chanel. Chanel No. 5 has been around for almost 100 years.

I’ve always been very sensitive to smell. I entered a competition one time to test hundreds of vodkas blindly. I knew which one was which based on the smell.

Why are they modeled after seven lovers?

I worked 10 years with French Vogue, and I knew with advertising it was really hard to talk about perfume. If you show the bottle you look like an advertisement. If you talk about the smell, it’s very difficult to understand smell with words. So with this perfume we decided to have a story behind the perfume.

Seven is also my lucky number. If I get an extra lover somewhere I didn’t expect I guess I will have to do more, but this is a starting point.

The lovers of the perfume are just fantasies; I came up with them with my cup of tea in bed. I’m much more boring than people think I am. I would love to be like that, to be fun, but I’m really not.

Are any of them named after real people?

Kar-Wai is the perfume for Hong Kong. I’m lucky to know one Kar-Wai, the filmmaker who made the film “In the Mood for Love.” I told him two days ago that he was going to have a perfume named after him. He said, “Why?” and I said, “Because I love your name.” He said, “I have to tell my wife!” I told him not to worry, that it’s just my pretend world.

Lawrence, the Dubai perfume, is named after “Lawrence of Arabia.” I discovered all the ways to protect from the sun from that movie. It’s my favorite.

Was making perfume harder or easier than you thought?

I thought it would be cool to make a perfume, but it’s not cool. There are so many rules and regulations to make sure it doesn’t burn your skin. And they change across countries. In some places you can’t use alcohol, but George has weed base in it.

This interview has been edited and condensed.