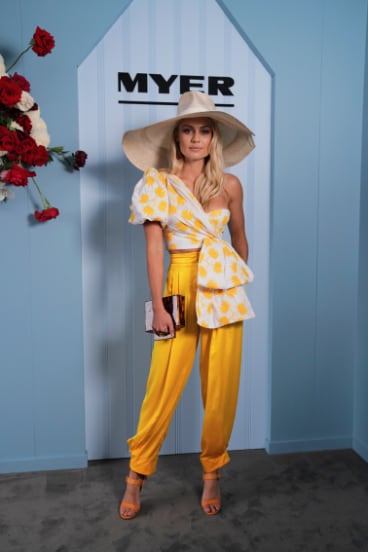 The Spring Racing Carnival, with its unpredictable weather, has always been like Russian roulette for fashionistas. But it was the women wearing sleeves and boots who had the last laugh on a soaking Melbourne Cup Day.

Or perhaps it was Birdcage stalwart Bec Judd, who skipped the races altogether for a last-minute call-up to New York for the Victoria's Secret fashion show, set to take place on Thursday night, US time. (No, Judd will not be donning the wings, instead interviewing models backstage to promote the brand's new Chadstone store.)

Back at the soggy track, the expansive deck at the Lexus marquee copped an unscheduled wash all morning as guests including Megan Gale and Kate Waterhouse took refuge on the ground floor and in the two restaurants, which, thanks to the rain, proved an ever hotter ticket than usual.

The biggest, ahem, buzz was at Bumble, the marquee belonging to the female-led dating app. They are hosting model and entrepreneur Lara Worthington, due to arrive about 1pm.

Defying the rules was P.E. Nation designer Pip Edwards, who opted for a beige suit with shorts for her visit to the Birdcage.

Meanwhile, there was some discussion early in the day about the rules regarding millinery, with some stars opting for barely-there pieces.

Model Megan Gale, the Lexus ambassador, said: "I don't think there's any right or wrong way. Some people say if you're going to the races you should wear a hat and it should be bold… but it depends on the individual. we have different head shapes, different hair, it has to make sense to the outfit overall. I think I have done every kind of millinery shape before!"

Gale said, since her early years coming to the races, the "industry" of styling had come such a long way.

"Even with hair and make-up they are starting to build their own brand. Lana [Wilkinson]… is a powerhouse, she dresses so many people and what goes on behind the scenes… it's an exciting time. It's not just about us, as talent… it's about the team, I don't just rock up here looking like this." 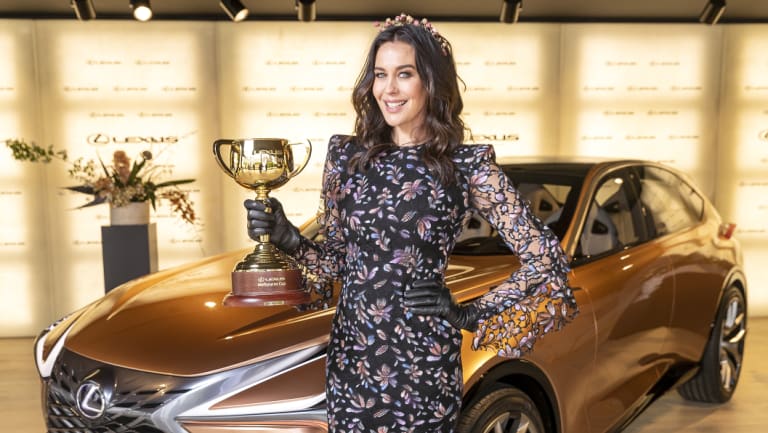 Megan Gale is seen holding the Lexus Melbourne Cup in Lexus ahead of the Melbourne Cup Carnival in Melbourne, Australia, Wednesday, October 31, 2018. Credit:AAP