Teresa Mendoza of “La Reina del Sur” is not an average telenovela character. She drinks, swears and smokes weed. She sleeps with multiple men and fights back when they try to dominate her. And throughout the course of the show’s wildly successful first season, which aired on the Spanish-language network Telemundo in 2011, Teresa goes from being a poor, naïve woman from Sinaloa, Mexico, to running the most successful drug trafficking operation in the south of Spain. It was exactly the sort of role the Mexican actress Kate del Castillo had always wanted to play.

“La Reina del Sur” is the best performing series in Telemundo’s history: Nearly 17 million viewers saw at least some of the show and, on average, 3 million people tuned in per episode, according to Telemundo. The show’s finale had more viewers in the coveted 18-34 demographic than any other network program in the 10 p.m. slot. Its success prompted Telemundo to add more “super series” to its roster of prime-time telenovelas: shows with a shorter run that incorporated more contemporary themes and allowed for less cookie-cutter characters. 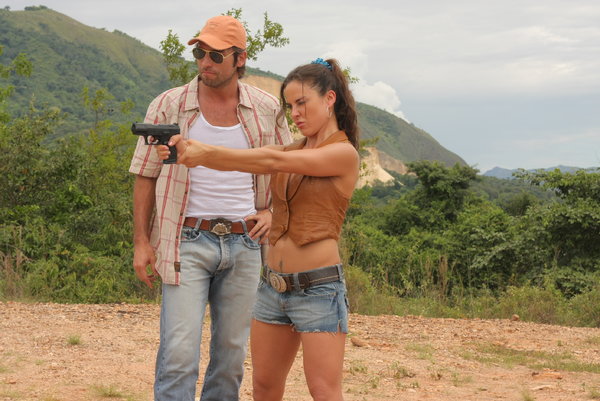 Now, eight years later, Ms. del Castillo is reprising the role in a new season, which premieres on Telemundo on April 22.

“The network jumped from rose-colored telenovelas to cocaine and bullets,” said Alberto Barrera, who has been a television writer in Latin America for 30 years. “The fact of a woman protagonist, who is Mexican, mixed up in narco trafficking has a lot to do with its success.” (Mr. Barrera is a regular contributor to New York Times en Español.)

In the first season, which is based on Arturo Pérez-Reverte’s best-selling novel of the same name, Teresa is forced to flee Mexico after her first love, el Güero, is killed by his bosses in the Sinaloa drug cartel. She ends up in Spain, where she spends time working in a brothel, lands in jail for dealing drugs and then gains money and fame as a drug trafficker after her release, all while evading the many men intent on killing her. The finale left her pregnant, in an unknown location, in witness protection.

Now that the show has returned we know she has been in Italy, selling jam and raising her 8-year-old daughter. Her life is idyllic. Then her daughter is kidnapped and Teresa must re-enter the dangerous drug trafficking world to get her back.

“You’re going to see a much more mature Teresa,” Ms. del Castillo said recently at an Italian restaurant in Manhattan. But she was emphatic that viewers not forget that Teresa “is in a world in which she didn’t ask to be.” The actress still views her character as a victim of circumstances, thrust into the drug world by chance and doing what she can to survive.

Ms. del Castillo brought up Joaquín Guzmán, the Sinaloa drug cartel boss better known as “El Chapo,” and her controversial meeting with him in 2015. Just as Teresa’s decision to date someone involved in the drug trade altered the course of her life, Ms. del Castillo said her decision to meet Mr. Guzmán drew unexpectedly harsh scrutiny. “I assume responsibility. I decided to do some things,” she said. “But there were other things that I didn’t decide, and that someone else decided for me.”

These are the things she did not decide: After a lengthy Rolling Stone article written by Sean Penn revealed that Ms. del Castillo had arranged and attended the meeting in 2015 between Mr. Penn, Mr. Guzmán and two producers, Ms. del Castillo was widely criticized by the Mexican government and media. The government opened an investigation into her relationship with El Chapo, and accused her of money laundering through her tequila brand. Investors pulled funding, and Ms. del Castillo lost acting roles she’d previously secured. As a precaution, her lawyers recommended she not return to Mexico until there was an administration change. She stayed away for three years, until the current president, Andrés Manuel López Obrador, was elected.

“I’m still getting over it,” said Ms. del Castillo. “But they broke me in pieces.”

Her case has been resolved, and in a trip to Mexico in December 2018, Ms. del Castillo announced that she was suing its national government for $60 million in “moral and material damages.”

The meeting with El Chapo was largely driven by ambition. The infamous druglord had signed over his life rights to Ms. del Castillo in 2014, and she was hoping that Mr. Penn and the producers who attended the meeting would collaborate with her on a movie. She had been living in Los Angeles since 2001, and though she’d gotten steady work, including roles in the 2007 movie “Under the Same Moon” and on the TV shows “Weeds” and “Jane the Virgin,” she was still struggling to secure more opportunities that fell outside of typical Latino archetypes.

“Being Latina in Hollywood is hard,” Ms. del Castillo said. “Every time I do a movie, an American movie, it’s like, ‘You have to dye your hair. It has to be black,’” she said. “It’s like, ‘You know we have salons in Mexico? And we have real blonde people in Mexico, with blue eyes.’”

She said she tries to educate people in the industry about what Mexico is really like. Things are changing, she said, “but it’s just too slow.”

Any Latino who watched Spanish-language television during the 1990s may wonder why Ms. del Castillo felt compelled to leave Mexico at all. She was already telenovela royalty there. She got her first break in 1991 as part of the ensemble cast for “Muchachitas” and acted in 10 more telenovelas in the following decade, almost always as the star.

“But I was bored,” she said. She was tired of playing “the good girl, the virgin, the one who cries, the one who submitted” to her man, all tropes used in most telenovelas. She had also recently separated from her abusive first husband, and it was being widely reported in the press. “I had a lot of hurt and embarrassment, because I was very well-known, and people looked at me with pity,” she said.

So she moved to Los Angeles alone, at 29, and lived on her own for the first time.

“In Mexico, we are very conservative,” she said. Being far from home forced her to interrogate her beliefs about religion and the machista culture there in a way she’d never needed to. She missed her family in Mexico City, where she was born (her father, Eric del Castillo, is a prominent film and telenovela actor) but said, of her first years alone in Los Angeles: “I think that really shaped me and made me understand myself without anyone else’s influence.”

Ms. del Castillo, like her character, still deeply loves her country and wanted to retain Teresa’s Mexican slang and mannerisms in the new season. “I think one of the things people love about Teresa is that she’s Mexican anywhere,” Ms. del Castillo said: yearning for tacos and educating others about Mexico and its geography. In one heated scene in the first season, in which a Spaniard tries to belittle Teresa for being South American, she corrects her while wielding a knife. “Soy norteña,” she screams. In another, she declares: “I am Mexican. I have indigenous blood. I am rebellious.”

In an interview, Ms. del Castillo was expressive, frequently using her hands to emphasize her points. She spoke with candor and humor about the difficulties she has faced. “It’s the only way,” she said.

“La Reina del Sur” broke a lot of new ground. It radically centered the female experience in the drug world, and showed how women are used as pawns in it. The sex workers and drug addicts were humanized and female characters had agency, even when they had to leverage their bodies as bargaining chips. The show continues to confront issues like sexual and domestic violence, immigration, abortion and racism. Teresa capitalizes on the fact that no one will suspect a woman of being a druglord, in one instance transporting a shipment of cocaine by hiding it in little bags stuck between rose petals. There is a strong bisexual character, Patricia O’Farrell, who becomes Teresa’s business partner and best friend.

Still, the show sometimes falls back on sexist tropes. Teresa is always made up and wearing heels, even when transporting drugs. Her outfits are regularly unreasonable (in one scene, she wears a white blazer to her office with seemingly nothing underneath). The men are babied; one is mouth fed tomatoes by his mother.

But perhaps these are just exaggerated representations of the many expectations regular women balance in real life. “She always has to prove herself,” said Ms. del Castillo when asked about Teresa’s attire. “She’s in a man’s world and thinks, ‘I am going to be viewed as perfect, so they respect me.’ Because that’s what we have to do as women.”

In the first season, Teresa learns how to shoot a gun, assemble a boat engine, dress the part and strategize with her enemies — all of which help her survive in her male dominated field. In the second season, she appears to have imparted similar lessons to her daughter, preparing her for the inevitable. In one scene, Teresa tells her explicitly, “Women have to learn to defend ourselves like a cat lying belly up.”

Ms. del Castillo said that, in general, she wishes she had been prepared “para partirme la madre” — meaning for how hard life would hit her.

She was careful to ensure that Teresa retained some softness. “Yes, she can be thundering and very hard and very harsh. But she’s still a woman. She’s still a mother. She’s still loving and protective. I don’t want her to lose that,” Ms. del Castillo said.

Beyond Teresa, Ms. del Castillo is in the middle of shooting “Bad Boys 2,” and in June, she’ll do a one-woman show in New York. “Every time I think about it, I get goose bumps and start to sweat,” she said. But “fear needs to be cannibalized to stay alert, it can’t paralyze us.”

How else will you grow, she asked.

Concepción de León is a digital staff writer covering news and culture for the Books section.