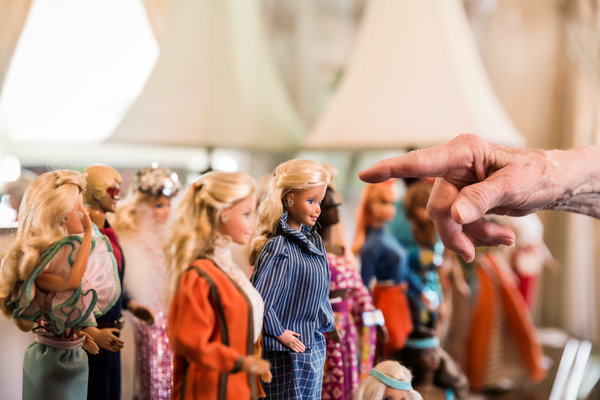 LOS ANGELES — Carol Spencer, 86, may be the most influential fashion designer you’ve never heard of.

In the mid-1960s, she made a red pencil skirt with a white sleeveless blouse that had red stitching and three red buttons down the front. Short white gloves came with it. Thousands sold.

In the 1970s, well aware that the counterculture’s loosening dress code and mores had made it to the mainstream, Ms. Spencer designed a red bandanna halter maxi-dress and a matching leisure shirt for men. Those designs were popular, too.

In the Nancy Reagan 1980s, Ms. Spencer aimed for high-end appeal, making a one-shouldered ball gown in blue jacquard with an organza flower at the nipped-in waist and a cape. One of Mrs. Reagan’s go-to couturiers personally approved the gown to be sold under his name: “Oscar de la Renta for Barbie.”

Ms. Spencer has made wedding dresses, saris, go-go boots and caftans. All in miniature. From 1963 to 1999, she was Barbie’s fashion designer, a career celebrated in her new book, “Dressing Barbie” (HarperDesign).

Ms. Spencer also made her own clothes, and had an easy time working with the doll’s famously unusual proportions, she said, because they weren’t so far from her own. “I have shrunk but in those days, I was tall and skinny,” she said. “I had a 16-inch waist and something on top, too, I sure did, but Barbie’s legs were better than mine.”

She was sitting in her dining room, wearing a blouse in a shade that can only be described as Barbie pink, with a Barbie brooch and a Barbie digital watch that legions of girls probably begged to get for Christmas in the 1990s.

It was a different body part that was most important for her job, Ms. Spencer said: “I have small hands.” She set down the Barbie teacup filled with lemonade she had been clasping to show her fingers. They are small and jut out at angles from the joint, a disfiguration likely caused by years of grasping little needles and bottles of glue.

In creating a wardrobe for Barbie and the entourage (Skipper, Ken, Midge, Big Jim, Baby Sister Kelly, Cara, Stacey, Christie, P.J., Steffie and Miss America), Ms. Spencer was part of a team that has inspired the work of designers including Bob Mackie, Nicole Miller, Jeremy Scott and Jason Wu, who once said he played with Barbie dolls when he was a child.

For a Moschino fashion show in Milan in 2014, Mr. Scott had a Barbie waiting on front-row chairs and sent models down the runway in blond bouffants and pink skirt suits.

Last month, to celebrate the doll’s 60th birthday, Mattel hosted a profusely pink Barbie bacchanal in New York City with Instagram-friendly Dream House backdrops, intended to draw in a new generation of fans who are too young to know that Barbie was the original influencer. 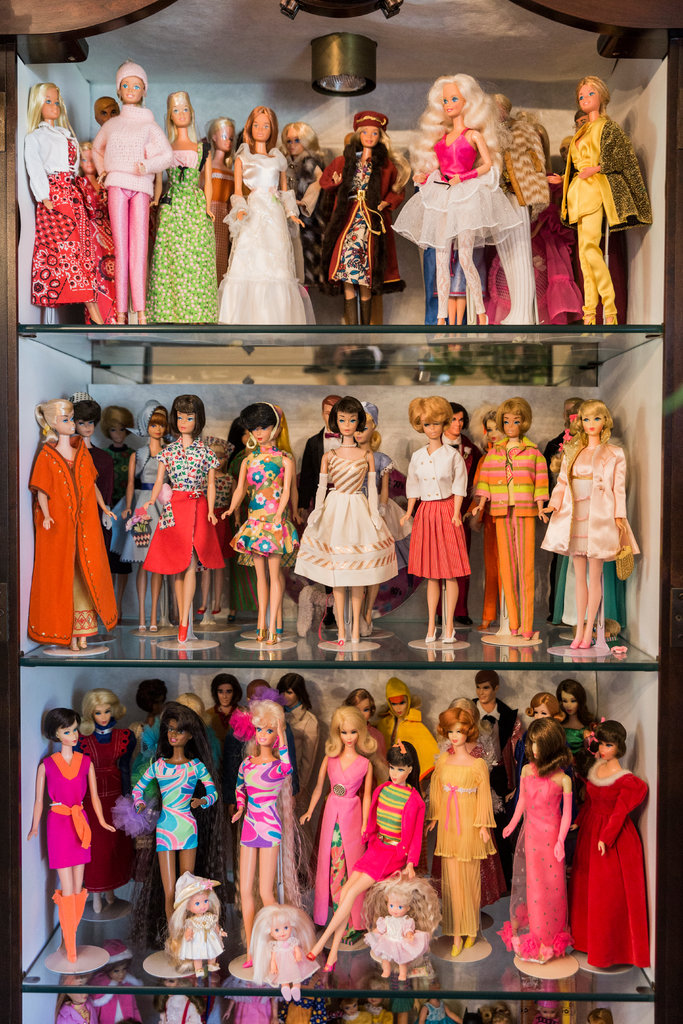 1. Ms. Spencer designed Ski Party Pink for Barbie in 1982. The sweater had Dolman sleeves and a cowl neck. In her ankle-strap high-heels, she was ready to hit the bars, not the slopes.

2. Released in 1979, this City Sophisticate outfit had a faux-fur-trimmed coat and skirt accented by a yellow soutache braid.

3. A Mattel employee accidentally ordered 2,500 yards of gold-and-white striped fabric, instead of 250 yards. Ms. Spencer’s 1965 Country Club Dance fashions made use of the excess.

4. The 1992 Totally Hair Barbie was one of Mattel’s best sellers. Ms. Spencer designed a Pucci-inspired mini.

5. Ms. Spencer wanted to create an “evening pajama” look for Barbie after Barbra Streisand wore a Scaasi version when accepting an Academy Award in 1969. Ms. Streisand’s outfit was see-through, so Ms. Spencer made Barbie special panties.

Even since her retirement, Ms. Spencer has devoted her time to Barbie. Inducted in 2017 into the Women in Toys, Licensing & Entertainment Hall of Fame, she has spent her golden years attending Barbie collectors events, doing research and amassing artifacts.

For years she has worked on “Dressing Barbie,” which is sized for a coffee table and subtitled “A Celebration of the Clothes That Made America’s Favorite Fashion Doll, and the Incredible Woman Behind Them.” Laurie Brookins, a writer and stylist, helped Ms. Spencer with the project.

The book combines styled vintage fashion photography with memoir. Born in 1932 and raised in Minneapolis, Ms. Spencer rejected the wife-and-mother path that prevailed in the American midcentury and instead made a career for herself. “I truly fell in love with Barbie the first moment I created her clothes and accessories,” she writes in the book.

Barbie has been a go-to emblem of all that has ill-served girls and young women in American culture. Living in a world that is almost exclusively white, the doll has breasts that are disproportionately large compared with her hips, and her feet are contorted into a permanent “floint” (short for flexing your toes back as you point the rest of your foot).

Her hair seems to be bleached blond, never with dark (or gray) roots. At times she dressed the part of a doctor or politician but has seemed unable to hold down a job. And there’s the place in Malibu. Does it come from a trust fund or Ken?

But Ms. Spencer would like to counterpunch the Barbie bashing. She points out the doll’s humble origins, with her proportions modeled after paper dolls cut from newspapers. She also defends Barbie as a healthy alternative to video games; an engine of imagination for girls and boys, who can project onto a Barbie doll whoever they may wish to become.

“It’s wholesome play,” she said, as she pulled from a case one of the many hundreds of dolls in her home. This one was wearing a yellow chiffon-like pleated tunic with see-through pajama pants, inspired by the Arnold Scaasi transparent ensemble Barbra Streisand wore to the 1969 Oscars when she won a best actress award for “Funny Girl.”

Ms. Spencer’s house is filled with books like “Barbie: Her Life and Times” and “Dream Doll: the Ruth Handler Story,” about Ms. Handler, who, with her husband, Elliot, and Harold Matson, founded Mattel in 1945. The Barbie fashion doll was released in 1959.

Over a cluttered desk are posters of Barbie, like one showing the same image of the original 1959 doll, displayed against four different bright backgrounds, à la Warhol. (It was made to celebrate Mattel’s 35th Anniversary Barbie Festival, in 1994.)

Ms. Spencer is a scavenger for treasures in a toss-everything world. One day at the Mattel offices, then located in Hawthorne, Calif., she noticed someone was about to throw away an important piece of Barbie memorabilia.

“It was the prototype for Barbie’s dune buggy,” she said. “They were tossing it, and I said, ‘Would you toss it my way?’”

She learned thrift as a child. “During World War II, things were scarce and I remember the family would get the Sunday paper,” Ms Spencer said. “When they’d get through with it, they’d hand me the comic pages so that I could cut out the paper dolls.”

She began to create paper fashion for these paper dolls. Soon she was making her own clothes. But being a fashion designer didn’t seem like a realistic goal in those days, she recalled. “You could be a teacher, nurse, secretary or clerk,” she said. “But wife and mother were the big ones.”

She was engaged to a medical student but when she realized she was expected to work to help pay for education before quitting to be a “doctor’s wife,” she broke the engagement. Then she enrolled at the Minneapolis College of Art and Design, where she got a bachelor of fine arts with a focus on fashion design.

In May 1955, as she was about to graduate, she received a telegram from New York letting her know that her application for a “guest editor” slot at Mademoiselle magazine had been approved. Instead of sticking around for her commencement ceremony, Ms. Spencer took her first plane trip and moved in to the Barbizon Hotel for Women, for a month.

During her time in New York, she attended a reception at the home of the cosmetics entrepreneur Helena Rubinstein, visited the recently opened United Nations, danced with West Point cadets at the St. Regis hotel and interviewed the designer Pauline Trigère in her studio.

Ms. Spencer was in the same class of Mademoiselle guest editors as Joan Didion. “It was about as far from Minneapolis as you could get,” she writes.

She returned to her hometown to work, designing children’s wear for Wonderalls Company and then moved to Milwaukee to become a “misses” sportswear designer.

In late 1962, Ms. Spencer spotted an advertisement in Women’s Wear Daily. “A national manufacturer who leads its industry with annual sales in excess of $50 million seeks a cost-conscious fashion designer-stylist for its suburban Los Angeles facility.”

She sent a résumé and heard nothing back. Still, sensing this mysterious job was her destiny, she and her aunt packed up their 1959 Ford Fairlane and drove across the country to California.

In April 1963, she saw an ad in the California Apparel News for the same job, and this time her application got a response. It was from Mattel, the toymaker already known for the postwar bombshell: Barbie.

Ms. Spencer went to the company headquarters for an interview and was asked to make a suite of outfits for this creature. She made a halter-top-and-boy-short bikini, a one-piece in the same shade of orange-pink. There was a cover-up and a wrap skirt. She got the job.

At that time, Mattel made about 125 different outfits a year for Barbie, and the fashion department, run by Charlotte Johnson, could be cutthroat.

“Charlotte had a theory,” Ms. Spencer said. “If you have four designers, you put them in four corners. And it was always competitive and you were pitching your product. Sometimes the competition was kind of dirty.”

How so? She wouldn’t say. “I’m out of it, I’m retired, I’m enjoying life, I’ll put it that way,” she said, and she took a sip of lemonade from her Barbie teacup.

Some of her early successes, all of which she has cataloged, included Country Club Dance (a white and gold striped gown), From Nine to Five (a midcalf blue dress with an embroidered vest and hair scarf) and Debutante Ball (an aqua satin gown with a fur stole).

Ms. Spencer took her cue from the culture around her. As the Jane Fonda aerobics craze of the 1980s took off, Barbie got a purple leotard and leg warmers. When NASA’s space shuttle exploration was in full tilt, Barbie became an astronaut (albeit one in thigh-high boots and silver capes).

And there was inspiration from her own life as well. When she needed a biopsy on her breast, Ms. Spencer was transfixed by the white coats doctors wore. The biopsy was negative, but the fashion was positive. Guess who became, however briefly, a surgeon?

There were missteps too, like when she gave Dr. Barbie a case of pink pills without knowing that at that time pink pills were known to be methamphetamines. “Let me tell you, that caused quite a stir,” she said. (Her faux pas was caught before Meth-Head Barbie made its way to children’s dollhouses.)

There are hundreds and hundreds of designs that are Carol Spencer originals, with only a small portion bearing her name. Until the mid-1990s, Mattel didn’t put designer names on Barbie’s packaging.

But Ms. Spencer remembers each of her creations, and many of them are in her home, which her sister, Margaret, 88, will be moving into soon. But even though Ms. Spencer gets out less these days, and relies on a walker to take more than a few steps, she said she feels surrounded by good company.

“You’re never alone when you have dinner at my house,” she said. “Barbie is always with you.”

Katherine Rosman is a features reporter. She covers media, social media and celebrity — and the way in which they intersect and collide. She joined The Times in 2014. @katierosman