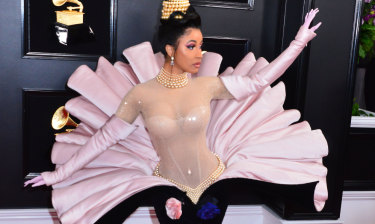 Cardi B at this year’s Grammys.Credit:Alamy

Last year, a sense of solidarity with the #MeToo movement sobered celebrities' sartorial choices. This year, the party's back on – but, as local cult commentator Fashion Critical notes, what works on the red carpet doesn't always translate into real life. 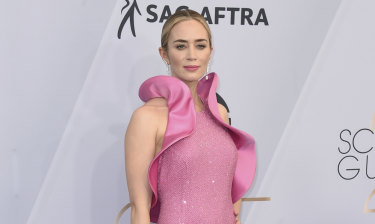 This is a trend I can't, nay, won't, shy away from: countless frocks on the red carpet appear to celebrate the, ahem, physical incarnation of womanhood.

American rapper Cardi B (top) arrived at February's Grammys in a dress that appeared to celebrate her ejection from the birth canal, while Emily Blunt (above) rocked some fallopian-tube vibes at the Screen Actors Guild Awards a month prior. I'm not sure if this is a covert political statement, but take it from me: gynaecological couture has arrived. 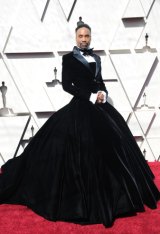 To the dismay of A-list women worldwide, the show stopper of this year's Oscars was a frock, but not one worn by any of them.  Like a magnificent velvet centaur, American performer Billy Porter (right) reminded us that if women can wear pants, then by George, men can wear dresses – and make a statement about the narrow old definition of masculinity in the process.

Top hats off to him and his Christian Siriano frocklet. 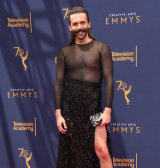 Queer Eye’s Jonathan Van Ness is another who gender-bends.Credit:Alamy

Queer Eye's Jonathan Van Ness (right) is another who gender-bends with his red carpet and everyday choices, rocking a crazy mo', a sheer evening frock and a hairy leg, all at once.

I'm loving these looks: somebody had to save us from the hellish boredom that was a million men in matching tuxedos.

All hail British It-girl Cara Delevingne, who wore a magnificently tailored tuxedo, top hat and fierce black heels (below) to the royal wedding (that little thing poor Eugenie had, not the one between Prince Harry and Meghan Markle). 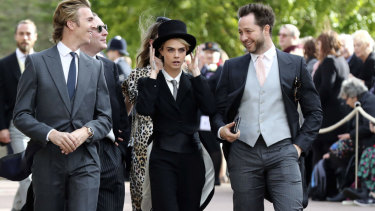 Cara Delevingne caused a stir with her royal wedding suit.Credit:AAP

Not because it was edgy, but because she looked – quite simply – sensational. Others subsequently followed suit, if you'll pardon the pun. 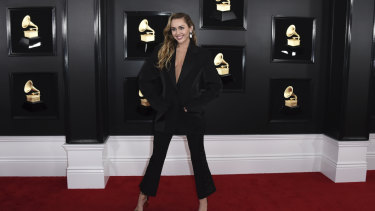 Miley Cyrus at this year’s Grammys.Credit:AP

When recreating this look, try to avoid the Miley Cyrus (above) interpretation, which featured a jacket sized for her dad Billy Ray, and cropped flares circa 1999. Close, but no cigar. 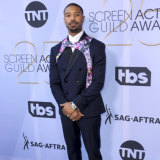 While donning a frock isn't for every man and his dog (certainly not his dog … then again, that could work), we've certainly seen the men folk step it up this season.

They've rarely featured in my red-carpet albums but this year's already looking different, with the guys wearing an array of colours and textures – even, in the case of actor Michael B. Jordan (right) at the Screen Actors Guild Awards, a baby harness – thankfully sans baby. Or TV personality Scott Evans (below) in bright canary yellow.

What a time to be alive! 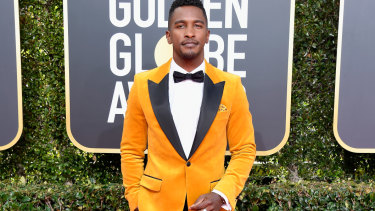 Call me old-fashioned, but I'm a big believer in the maxim that one should use as much frilly fabric as is feasibly possible when making a red-carpet entrance.

Others appear to agree with me, with a firm red-carpet return to the toilet-dolly look of decades past.

If it's floofy or flouncy, you can bet your 1985 Janome that we've seen it this season. 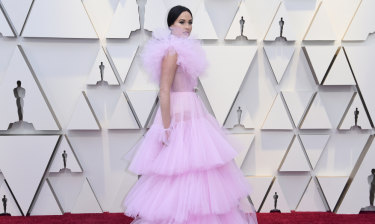 Kacey Musgraves at the Oscars.Credit:AAP 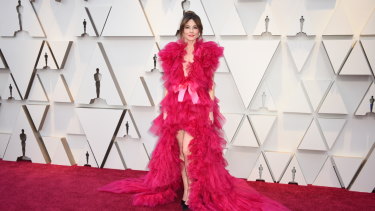 Linda Cardellini at this year’s Oscars.Credit:AP 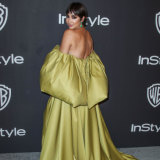 Whether it's a doona or your fitted sheet, don't be afraid to rock your Sheridans next time you're invited to a black-tie soirée. If it's good enough for the red carpet, manchester aisle five is good enough for you. Lady Gaga (below) rocked a look from the Adairs spring/summer collection at the Oscars, while others such as Jackie Cruz (right)  have gone with a more duvet/sleeping-bag vibe.

Either way, this is fashion for the chronically under-slept. And I, for one, am here for it. 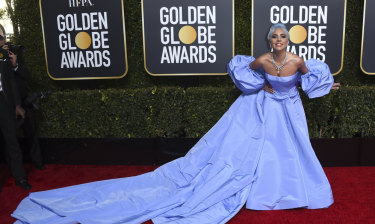 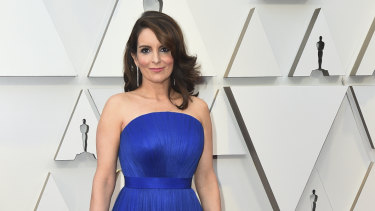 Tina Fey at this year’s Oscars.Credit:AAP

Praise be, we've celebrated a return to colour following the grim blackness, both metaphorically and literally speaking, of the 2018 #MeToo red-carpet season. 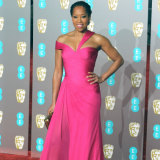 Regina King at the British Academy of Film and Television Arts Awards.Credit:Alamy

We've seen a cornucopia of bold colours rocking the rouge, with one of my favourite looks worn by actor/director Regina King (right) at the British Academy of Film and Television Arts gongs in February.

Actor/comedian Tina Fey (above) was another delight at the Oscars, in a magnificently simple, elegant royal blue gown. But, as they say, you don't get a rainbow without a little rain, and hue is everything (I'm not just talking Jackman).

Take actor Tracee Ellis Ross (below), who thought Kermit green was a thing. It shouldn't be. 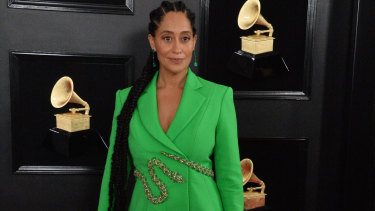 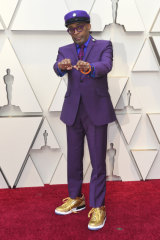 Spike Lee at the Oscars.Credit:AAP

I prayed high fashion's hideous sneaker thing wouldn't make it onto the hallowed red carpets but, alas, nobody was listening.

I'm all for donning a pair of sneaks for an everyday look, but – for god's sake – not when you're a red-carpet A-lister … Are you listening, Spike Lee (right)?

Unless Tom Cruise is approaching for a "casual" chat about Scientology, you can leave your runners at home. Big, unflattering designer clod-hoppers, be gone.

To read more from Good Weekend magazine, visit our page at The Sydney Morning Herald, The Age and Brisbane Times