Gabrielle Boucinha, a freelance graphic designer, introduced her Instagram account in the wake of Phoebe Philo’s much lamented exit from Celine. Her feed, @oldceline, a compilation of images dating from Ms. Philo’s decade-long tenure at the luxury house, has drawn an ardent following, swelling from a few hundred in September, when Hedi Slimane was set to replace Ms. Philo as creative director, to a current 140,000.

Combined with a surge in sales of recent and more vintage Philo designs, that figure, Ms. Boucinha said, would seem to suggest a consumer reaction — a mini-revolt, if you will — unmatched in recent memory. “At luxury houses, designers come and go,” she said. “But I’ve never seen this kind of response to a switch in a house’s creative direction.”

As late as this month, when the new bag that Mr. Slimane designed arrived in stores, Ms. Philo’s champions (Philo-philes, in fashion parlance) were still chasing down trophies bearing the designer’s singular stamp, prowling shops and foraging for castoffs on eBay and consignment sites like Tradesy, Vestiaire Collective and the RealReal.

The rush appeared to signal disenchantment with Mr. Slimane, who in his debut collection for the house swapped Ms. Philo’s deftly underplayed, slightly masculine swagger for a steamier rock-meets-young-Hollywood look.

But that discontent only partly accounts for the recent spike in Philo fever. Supplies may dwindle or vanish entirely from stores, but demand remains robust. 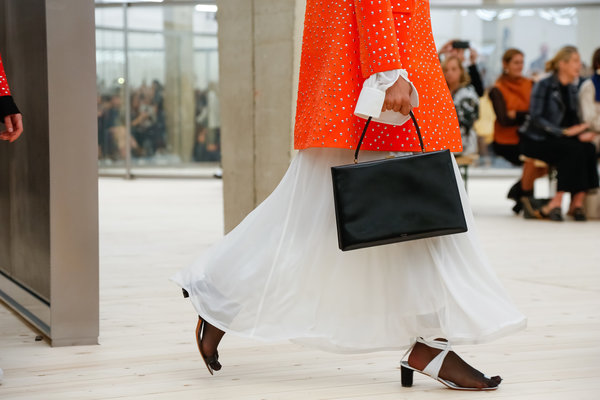 “My spend on Celine increased this season,” said Ramya Giangola, the founder of Gogoluxe, a luxury brand consultancy. Spurred by what she called “the sense of an ending,” Ms. Giangola, who was in Paris during fashion week, went to Celine on Avenue Montaigne the weekend after Mr. Slimane’s runway show. At the store, the scene was hectic, she recalled.

“In terms of the crowds, it felt like being at Zara,” Ms. Giangola said. “There was the feeling that you had to grab it all, and if you didn’t, the next day it would all be gone.”

Rarely has an exiting designer been so pursued — or so eulogized.

“Bar perhaps Coco Chanel, I can’t think of another designer whose every piece was instantaneously ‘a classic,’” Lucy Chadwick, an influential art dealer, told T magazine earlier this fall. “In a time of eternally rotating fads and disposability and waste, nothing felt more necessary.”

Ms. Philo’s sustained impact can also be measured through online searches and sales. On eBay, searches jumped 225 percent on Sept. 29, the day after Mr. Slimane showed his first collection. Sales, which sprinted ahead 35 percent from September to October, continue to climb, up 10 percent month over month, according to the company.

At the RealReal, searches increased in October, with a sustained growth of 32 percent over the same period last year, said Rati Sahi Levesque, the chief merchant of the company. Prices have climbed by 30 percent over last year at this time, she noted, and revenues are up 35 percent.

At Tradesy, searches for Celine have increased 34 percent since September, compared with June through August. In October, the average selling price leapt 35 percent, according to Tracy DiNunzio, the company’s founder and chief executive. “The things that cost more were the things that sold,” Ms. DiNunzio said.

“We have more people asking, ‘Oh, what do you have in Celine?’” said Ina Bernstein, the owner of the Ina group of consignment stores in Manhattan. “Philo designs have alway gone fast, but they go even faster now. We can’t keep the signature trapeze and luggage bags in stock.”

Never mind prices that range from $1,800 to about $2,500. A pair of boots combining pony, camel, black leather and leopard, outré by conservative standards, sold the day they arrived, Ms. Bernstein said.

The rush on Ms. Philo’s creations attests to a loyalty her contemporaries seldom command. Her aesthetic, some argue, represented a sea change. “She gave us a long slit dress in place of a short one, wide-leg pants that got us out of clingy jeans,” Ms. Boucinha said.

The Philo look, built on sumptuous fabrics, loose cuts and lavish layering, “makes a statement that when it comes to looking sexy, you don't have to try so hard,” she added.

“Look around,” she said. “No one is walking all day in high heels any more.”

Ms. Philo’s acolytes tend to shop with a collector’s discernment. “Since discovering Celine, I’ve thought less about quantity and more about quality," Ms. Giangolo said. “I started shopping less and focusing more on the way I spent money and wore clothes.”

She might say that her purchases were justified by the longevity of Ms. Philo’s designs. So might Lizzie Hanes, an aesthetician in Brooklyn who was spotted last week eyeing a Philo cream-colored coat at the RealReal in SoHo.

“So much Celine that I bought I’m going to have forever,” Ms. Hanes said. “If I were to buy an Ulla Johnson dress, I would probably be tired of it in a season or two.”

Fur-lined Birkenstocks and blush-tone coats aside, it’s often not easy to tell what season a Celine piece is from, Ms. Bernstein said, suggesting that Ms. Philo’s designs have no apparent sell-by date.

“They’re all very timeless,” she said, adding a bit dourly, “so, so much of fashion isn’t timeless right now.”