FINDING it tricky to get tough stains out of babies’ clothes? The answer may be sunshine.

Parents have been sharing how they have been removing dreaded poo and food stains from nappies and clothes by hanging them out in the sun.

Nappy Experts at TheNappyLady website shared before and after photos of a stained nappy looking nearly brand new after being hung outside.

They wrote: “The first photo is how the nappy looked straight after coming out of the washing machine.

“The second photo is of the same nappy after approx 24 hours on the line on a cloudy day. (I left the nappy out overnight as well.)

“The stain had almost entirely gone using only the power of the sun.” 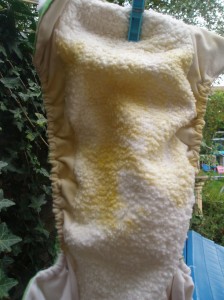 The process works by ultraviolet rays in sunshine breaking down the chemical bonds, causing a bleaching effect.

The nappy website explained: “The stains aren’t removed but through a process of oxidisation they are made invisible by changing the way the colour (or stain) absorbs the light to make them seem colourless.

“Bilirubin is responsible for the brown colour of all human fecal matter and is produced when red blood cells break down naturally in the liver.

“The chemical Bilirubin is photosensitive, which essentially means it breaks down under UV light which is why sunlight is good for cleaning nappies! 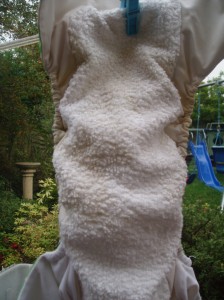 “(If i wanted to be completely accurate, it isn't actually photosensitive, it undergoes isomerization in the presence of light, but only scientists would pull me up on that point!)”

Other mums have been swearing by hanging baby clothes outside to remove stains without using harsh chemicals.

Amy Kyne, from Nottingham, previously shared a photo of a white onesie covered in tomato sauce, and another of the same vest after 24 hours on the line.

Taking to the Facebook group Cleaning hacks, tips and recommendations, she said: “Before and after 24 hours on the line and no stain remover needed”.

Other mums agreed the tip works, and said: “It genuinely works. Poo and tomato sauce stains disappear after several hours outside in strong sunshine. Don't ask how it works, it just does.”

Another added: “Yes also an advocate of this… works for me on all the baby stuff'”.

And forget Vanish! We shared how a mum used washing up liquid to remove poo stains from baby grows and the results are amazing.

In other parenting-related news, a crafty mum makes stunning wendy house for her daughter out of cardboard for just a couple of quid.

Plus mum buys a vending machine, fills it with snacks & says it’s the best way to get kids doing their pocket money chores.