Philipp Plein, the maximalist designer whose studs and skulls bling brighter than those of nearly all his competitors, cordially invited the fashion industry to a black-tie dinner and fashion show at the Pool and the Grill.

It would mark the triumphant return of his runway show to New York Fashion Week. This dinner, to be held on Monday, Feb. 11, would include the new collections for both his Philipp Plein and Billionaire labels, a three-course meal and, the invitation promised, a “performance by Kanye West not to be missed.”

Invitations included this promise in bold, lest it be missed.

The only problem was: Not to Mr. West. 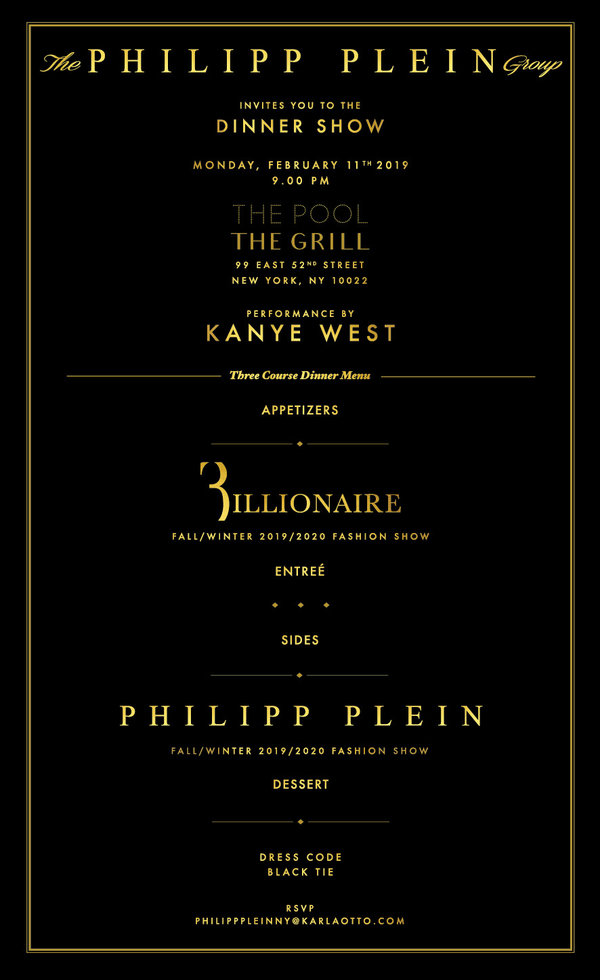 A hint of trouble on the horizon first bubbled up on Wednesday, when Kim Kardashian West tweeted that her husband would not be performing at any fashion shows this season. “Just a rumor,” she wrote.

According to the report, an associate of Mr. West’s began negotiating with Mr. Plein’s team for a seven-figure performance fee without Mr. West’s knowledge, forging his signature on an official document and pocketing the advance.

Fashion labels often look for ways to make their shows stand out from the pack, and Mr. Plein has gone further than most at his. Jets of fire have flamed in the air. Stunt riders have motorcycled around a metal globe. Models have ridden fully functioning roller coasters through his show spaces, walked hand in hand with giant robots and jousted on Jet Skis.

Mr. Plein’s show budgets, a former marketing director for the company confirmed to The New York Times in 2015, could run to more than $2.5 million. (In what amounts to a declarative fillip as much as an investment, the Philipp Plein group acquired a majority stake in a label called Billionaire.)

But his calling card has always been musicians, the higher their profile, the better. Grace Jones, Snoop Dogg, Lil Wayne, Busta Rhymes and Azealia Banks have all performed at his shows, often in Milan.

He books with a free hand for appearance fees and little care for controversy. Chris Brown, the singer who pleaded guilty to assaulting Rihanna in 2009 and has since been in and out of trouble with the law since, has performed at Plein shows. So has the rapper Tekashi69, who has boasted of gang affiliations.

A representative for Mr. West confirmed that he would not be performing on Monday and had no further comment.

In a statement, Philipp Plein International said it had been “beyond excited” to work with Mr. West but confirmed that he would not be performing. The company denied any misconduct on its or Mr. West’s part and blamed the situation on “an individual pretending to be part of his management team,” who “acted without Kanye’s knowledge, capitalizing on a former friendship with him.”

A representative for the Plein company declined to comment on the payment reported by TMZ.

“We hope to collaborate with Kanye West in the future, and we look forward to our 20th anniversary show this Monday evening,” the statement concluded.