AS Brits eagerly await Christmas adverts from big name brands, one amateur offering is leaving people in floods of tears.

An alternative to John Lewis’ Christmas advert, which has yet to air, has been released on YouTube, telling the heart-wrenching story of a man and his dog.

The heart wrenching ad – which cost nothing to make – has racked up more than a million views as viewers claimed they’d been moved to tears by the sad tale.

The five-minute long clip has been created by a bloke named Sam Clegg, who sings the backing track on the ad, who added his dad stars as the actor.

He warned people it’s a “sad song and video that will make you cry”.

Sam told Fabulous Digital the advert didn't cost a penny to make, as he used an old camera he had lying around, and made the song and video by himself.

He explained the ad had been created to raise much needed funds for charity, going towards helping the elderly over Christmas.

Same said: “This song/advert is dedicated to everyone who has faced hardships in 2020.

“This story is one of loss and sorrow which some viewers may find distressing, but with this video/campaign we hope to turn a negative into a positive by donating all of the proceeds made from the song to multiple charities that support the elderly in the UK!

“This Christmas Advert Concept for John Lewis was filmed to show the bond between humans and dogs.

“Many elderly people rely on their animal family for their wellbeing.”

The ad starts off by showing a gloriously festive scene, with an elderly chap enjoying advent calendars with his beloved dog, Bruno.

As they count down to Christmas, the pair share gifts and eat festive food, but the advert takes a sombre turn when they go out for a wintery walk.

Bruno goes missing, and his owner tirelessly searches for him, even putting up lost dog posters.

The heartbreaking ad has reduced some people to tears, with one person saying: “This made me cry like a banshee! The song and cause is amazing. CHRISTMAS NO 1 PLEASE!!!!!”

Another wrote: “Omg this is so sad. Was just thinking about the song and it brought tears to my eyes.”

A third admitted: “There isn’t much that makes me cry but this… this got me crying, and you don’t need to be sorry, because it’s an amazing video. Keep up the good work.”

While this person wrote: “This truly moved me to tears so emotional but its so true!

The commercial may have a tragic ending, but Sam pointed out it’s all to highlight the plight of vulnerable people at this time.

And he confirmed 'Bruno' is the family dog who's alive and well, adding: "His name is Charlie in real life and he often sings on my YouTube Channel."

Sam added: “With this song, we hope to raise money for multiple charities that support the elderly.

“We were inspired by our own hometown Sir Captain Tom Moore’s charitable efforts to raise money for a brilliant cause.

“With each £0.79p purchase it will help give support & companionship to the elderly who need it most in 2020.” 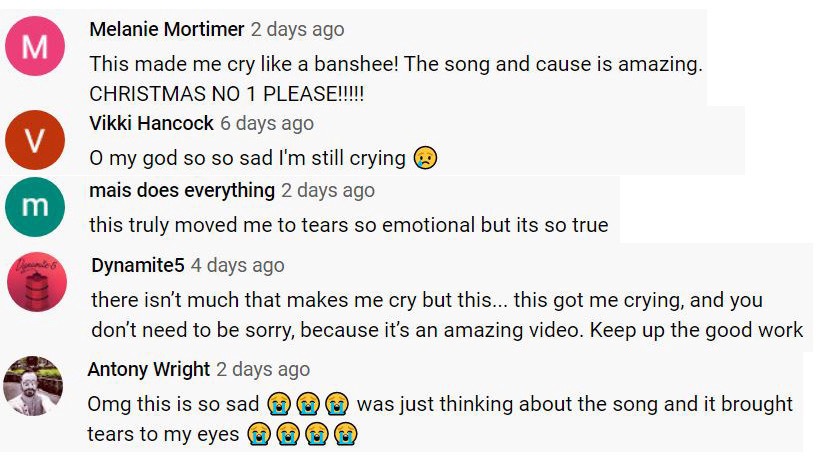 And with the holidays around the corner we ask if YOU guess the iconic Christmas advert from a single image?

Plus this mum's epic Christmas present haul is SO big she can’t see her floor – but it’s not for her kids.

Meanwhile a radio station playing nothing but Christmas songs has just launched so you can get your festive fix two months early.