PARIS — France is being roiled by yet another clothing controversy. Almost three years after the burkini scandal, which became the fulcrum of a debate over the right of self-expression versus the social contract, comes renewed furor over the hijab, after a French sporting goods retailer, Decathlon, withdrew its plans to sell a runner’s head scarf under pressure of a boycott.

It’s easy for what we wear to become a symbol of what divides us; easy to seize on dress as a point of difference, and to transform it into something ugly.

Which is why it can be such a balm when designers choose to make their cause with beauty and dignity instead. 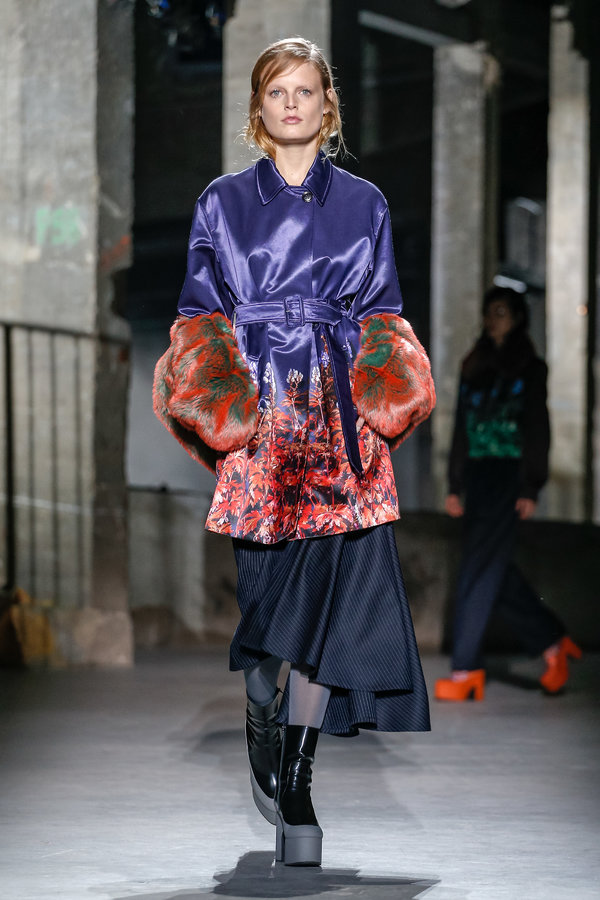 Such is the case with Dries Van Noten, the Belgian whose unique study of color, print and line has a poetry of its own. This season his subject was roses — specifically the roses in his own garden outside of Antwerp, which he has long tended with love and neuroses. It sounds kind of banal, and he even quoted Gertrude Stein’s “A rose is a rose is a rose” in his show notes, but then he subverted expectations by focusing on the flowers’ flaws: the moment when they begin to wilt and the decay sets in.

In that, he found grace.

Building on a base of dark-gray pinstripe tailoring — in curvaceous double-breasted jackets and the couture drape of a sheath with starburst folds on the side, a quilted scarf over one arm — he added a corsage of blooms at the neck of a dove-colored shirt, shadows visible beneath the petals.

The flowers were sprinkled over lemon-yellow silk jackets and lavender skirts, leaves on the verge of browning and falling to the ground were visible beneath a scrim of tulle or organza tossed atop a sheath dress or turtleneck to create the blurriness of double exposure. They crept up from the hem of a green silk bathrobe coat, bloomed on boots and were embedded in clusters of gold sequins. Their imperfections grounded the elegance and made it real. So did the elastic waists.

This wasn’t fashion as fantasy. It was fashion as an elegy to nature under threat; nature as it may not exist in the future. That should be something we can all get behind. 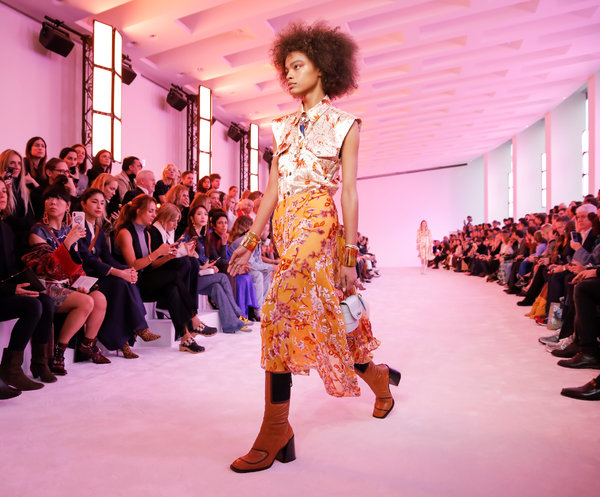 Certainly Natacha Ramsay-Levi did at Chloé, in an entirely different way. Her focus was on the untamed and untended moors; the wild expanses. Against a soundtrack of galloping hooves came tweeds and tartans, houndstooth and devoré florals. Trousers were long and skinny and unzipped at the ankle to flare over the foot; jackets had big brass buttons; dresses were asymmetrical and puffed at the sleeve; and jumpsuits were patterned in climbing vines of silver, burst into bud. There were horn cuffs and half-moon necklaces and branching gold earrings. If a pioneer woman had a night gig as a pagan priestess and wanted something to wear to work that would take her day to evening, this would do the job.

Also in the mix: a remixed toile de Jouy sketched with the outline of a couple standing hand in hand, staring out at an endless field of rocks and mountain shrubs, used in a flirty chiffon minidress and reproduced in saturated color on a T-shirt, either way meant to signify “engagement and commitment,” Ms. Ramsay-Levi said backstage before the show. Though it is true that her clothes also require a certain commitment to a look, she was talking rather about relationships.