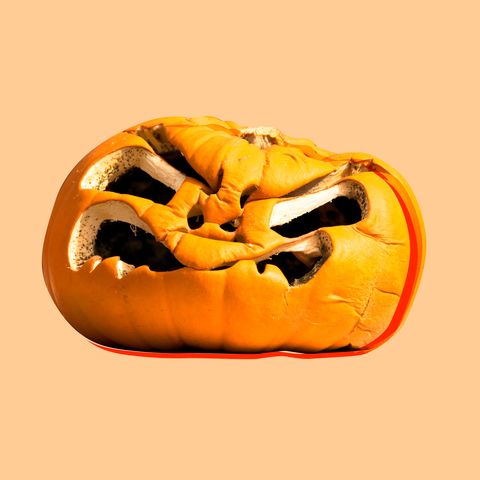 Hi. I do not like Halloween and I never have—ask me anything.

Just kidding, don’t ask me anything, because I’m about to TELL you how much it sucks and you can just sit there and read it (or, you know, ignore me—up to you!). Here are all the reasons Halloween is The. Worst.

1) First of all, candy isn’t that great.

I’m more of a salty snack person and I’ve never liked candy, even as a little kid, so I flat out don’t get the “treat” part of “Trick or Treat.”

2) And trick-or-treating is a terrible idea.

Why do we tell kids never to take candy from strangers and then confuse them by telling them it’s OK for one night of the year??? You are sending mixed messages.

ALSO, adults suck at buying the candy kids actually like. I’m partial to very few candies myself (SweetTarts, Sour Patch Kids = yum) and you can trust I hardly ever got any of them during my door-knocking efforts as a child. (What child wants Peppermint Patties?!) But even kids that DO enjoy candy never get tons of the kinds they like the best. We always ended up swapping stuff later on, or leaving a big pile of candy corn in the dust at the end of the night (if you honestly like candy corn, you’re beyond my help).

Nothing feels good about shoving your hand into a pumpkin and taking out the guts. You cannot pay me to do this.

4) Be honest: costumes sort of suck.

This, of course, excludes costumes for babies and dogs because that’s cute as hell.

All other costumes are sh*tty. They’re either cheap and break, or they cost an arm and a leg for two yards of fabric.

5) Oh, don’t get me started on DIY-ing Halloween outfits.

I’m not crafty and that’s the end of that.

6) This “holiday” gets stupidly intense as a grown-up.

As a kid, I told myself I could ride the tide of Halloween, because, obviously, it is childish and adults surely are beyond it, so it will die down, and I’ll be fine. I was wrong. Adults are crazy about Halloween—if anything, the standards for makeup and costumes have only gotten higher, and the pressure for an Instagram-worthy night-out is through the roof. All of this honestly takes the fun out of what should be a low-key, light-hearted evening with friends in which we all eat Sour Patch Kids until our mouths hurt.

7) Spooky stuff is scary and I don’t like being scared!

Haunted houses, hayrides, corn-mazes, amusement parks—I hate ’em all. I do not like the heart-racing feeling you get when someone jumps out at you and I especially hate the idea that someone could actually grab me. WHO LIKES THIS FEELING?? WHY DO YOU LIKE IT?? I WILL NEVER UNDERSTAND. Also—what if that chainsaw is actually real?!! I can’t deal with any of this anxiety, so, bye.

8) That ^^ includes creepy costumes and decorations.

I hate other people’s Freddy masks, zombie makeup, and f*cking zipper faces. Cut that shit out! I also don’t like witches on doorsteps that cackle when you cross their sensors or big fuzzy spiders and fake webs that you people spread across the doors of your houses. I’m an innocent passer-by just trying to get from Point A to Point B and why are you attacking me!?!?

9) Also not here for your scary movies, which should surprise no one.

If you’ve made it this far through the article, I shouldn’t have to explain this one. No.

That’s because I work at Cosmopolitan and you people love this dumb holiday so much that I’m forced to immerse myself in pages upon pages of “spooky costumes,” “creepy makeup,” “group Halloween costumes,” and “pun costumes” on Instagram. It’s my worst nightmare.

Thank you for coming to my Ted talk.