For as long as I can remember, I’ve crossed my legs. This is hardly a declaration, and, since I’m not a celebrity or dating one, neither breaking news nor worthy of trending status. It’s just something that comes to mind when I read stories about gender, sexuality, toxic masculinity and the power and politics of the body in America.

As a young boy growing up in Louisiana, I’d study art and history books or old photographs. The men, well dressed and regal, seemed to cross their legs, one limb leisurely draped over the knee and thigh of the other, foot hanging, the point of the shoe angled, slightly inward, just so, like the neck of a curious pet.

I was a peculiar black kid trying to find a sense of stature in what was often a less than friendly environment, and those images provided me with a sense of satisfaction. I didn’t have to sit with my legs agape, verging on the vulgar, like most of the men I saw demanding space. Crossing one’s legs wasn’t just for women. I, too, could partake, with aplomb, and bask in that aura of two-fingered bourbon gentility.

I’d like to think I was only replicating the men I’d seen in those images. But in the 1980s, as I made it to high school, I realized I wasn’t trying to be regal. I was crossing my legs because I was trying to shrink, trying to be less of a presence than my tall, lanky, yet graceful (see: effeminate) body demanded.

I often found myself sitting at my alphabetically assigned school desk, continually reminding myself to uncross my legs, only to instinctively cross them again a few seconds later. With this constant shifting in my seat, I must have looked as if I was having muscle spasms, or at least doing a new dance not quite ready to catch on.

It seemed like such a small habit to break — a minor adjustment that would keep me from looking like a founding member of the Future Homosexuals of America club. But being closed off seemed the safer route, so cross my legs I did. In a way, there was a sense of defiance to it. In attempting to shrink, I appeared to become more mysterious and, thus, was perceived as strong.

Perhaps the crossing of my legs would have been considered less effeminate, or noticeable, if not paired with the way I carried my books. The preppy boys at my rather conservative school always carried their books, sometimes three or four, in their hands, swinging them with ease near their hips, in step with their slow masculine gaits.

At the time, this seemed like the most amazing feat. Sure, I could carry the same number of books, but I did so with them cradled between my wrist and forearm, clutched to my chest, as if I was protecting my knowledge, while also shielding my internal organs from impending injury.

I’d tried to hold the books at my side, tried to be what was considered manly, less “soft,” less European, but all the tennis practice in the world couldn’t make my wrist strong enough. I was a walking double fault. The swing didn’t come naturally to me. It wasn’t comfortable or fluid. Cramping always ensued.

Thinking about it now, perhaps that’s how the term “limp wrist” came about. A black boy could get away with many things, but walking around with a perched, limp wrist wasn’t among them. That was surely for women only.

Unless, of course, you were on the basketball court. On the basketball court, all the players seem to have limp wrists — not just on the follow-through of a shot, but as they back down the court to defend. But these guys aren’t considered less than men. No one is “less than” as long as a ball is involved.

Though much has changed since I was of school age — same-sex prom dates, male homecoming queens, same-sex marriage — I still know there is a little guy out there, somewhere, trying to uncross his legs, to hide a part of himself, trying to go unnoticed.

Instead of holding his books in his hand, he may now opt to carry them in an internationally ubiquitous Michael Kors knockoff (being a young gay is much more expensive than it used to be), reminding himself to hold the strap in his hand, letting it hang, rather than dangle from the elbow fold in his upwardly bent arm. To him, I just want to scream, “Walk with your arm cocked, use the elbow fold! It’s more comfortable and, frankly, practical. That’s why women do it! Learn it and learn it well.”

In other cultures, it’s not uncommon to see young men walking the streets holding hands, sitting on each other’s laps or with legs crossed, with no brows raised by passers-by. It has little to do with sexuality and more to do with affection, familial or otherwise.

But as I continue to travel or live abroad, I see that through social media and the internet, our American culture infiltrates, even colonizes, other cultures. Innocent male-to-male affection is slowly disappearing, replaced by an aggressive emotional remove.

Middle-class, once-thin gay guys in Africa and China are joining newly opened Western-style gyms, drinking supplemental shakes and bulking up to appear more masculine, more manly and more desirable. Now, as in America, gay profiles on apps in these countries are starting to say, “No fats or femmes.”

In a way, with their new bodies and swagger, these men are doing exactly what I did as a schoolboy, crossing then uncrossing my legs. They are often trying to fit in, to blend and, to an extent, shrink, albeit behind bulk. The difference is, even then, as a child, I was aware of why I was doing it. I wonder if the men of today know?

As men, gay or straight, we’ve made it out of caves (well, some of us at least) and closets. We’ve survived metrosexuality and the so-called down low (“straight” men having sex with men). But we are still desperately trying to find our footing, as men, to walk upright, with our heads facing the sun, looking for the best light for that vulnerable selfie we are not sure we should post.

Every so often, I’ll see a little boy sitting somewhere, in public, with his little legs crossed. He is usually smartly dressed, though reserved, sitting away from the other kids, positioned near the adults, reading or drawing rather than running around. I always smile, because it makes me think of my little self, and also because it’s still a peculiar sight. Sadly, it still stands out as something odd, not quite right.

But he’s a child, doing exactly what a child is supposed to do: be free to discover. I can imagine other adults describing him as an old soul or some such, while some probably whisper behind his parents’ backs about whether he’ll “turn out to be gay.”

I don’t really care what he is or becomes, but I always get joy in seeing something familiar, something as joyous and consistently inconsistent as a little boy with his legs crossed, shoe angled just so.

I’m still tall and lanky. I still cross my legs. It makes me feel comfortable, but at this point I’m hardly trying to shrink or hide.

Still, I often remind myself to uncross them, to plant both feet firmly on the floor, to be open, centered. And not because I wonder how it will appear to others. Rather, I’m at an age where I have to concern myself with my spine; I learned recently that it has been slowly curving.

Why is it curving?, you ask.

Not because I’m ill, but from decades of crossing my damn legs.

Brian Keith Jackson is an arts and culture writer and novelist.

Rites of Passage is a weekly-ish column from Styles and The Times Gender Initiative. For information on how to submit an essay, click here. ​To read past essays, check out this page. 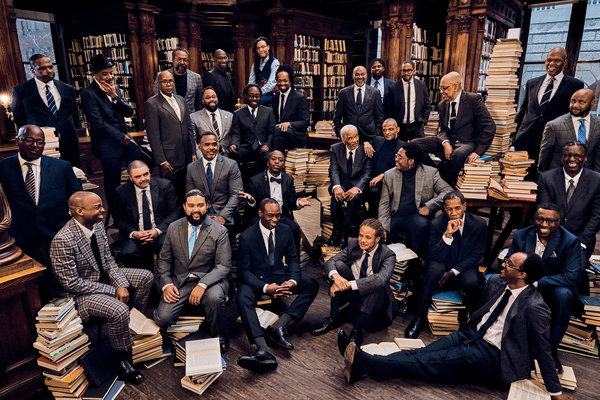