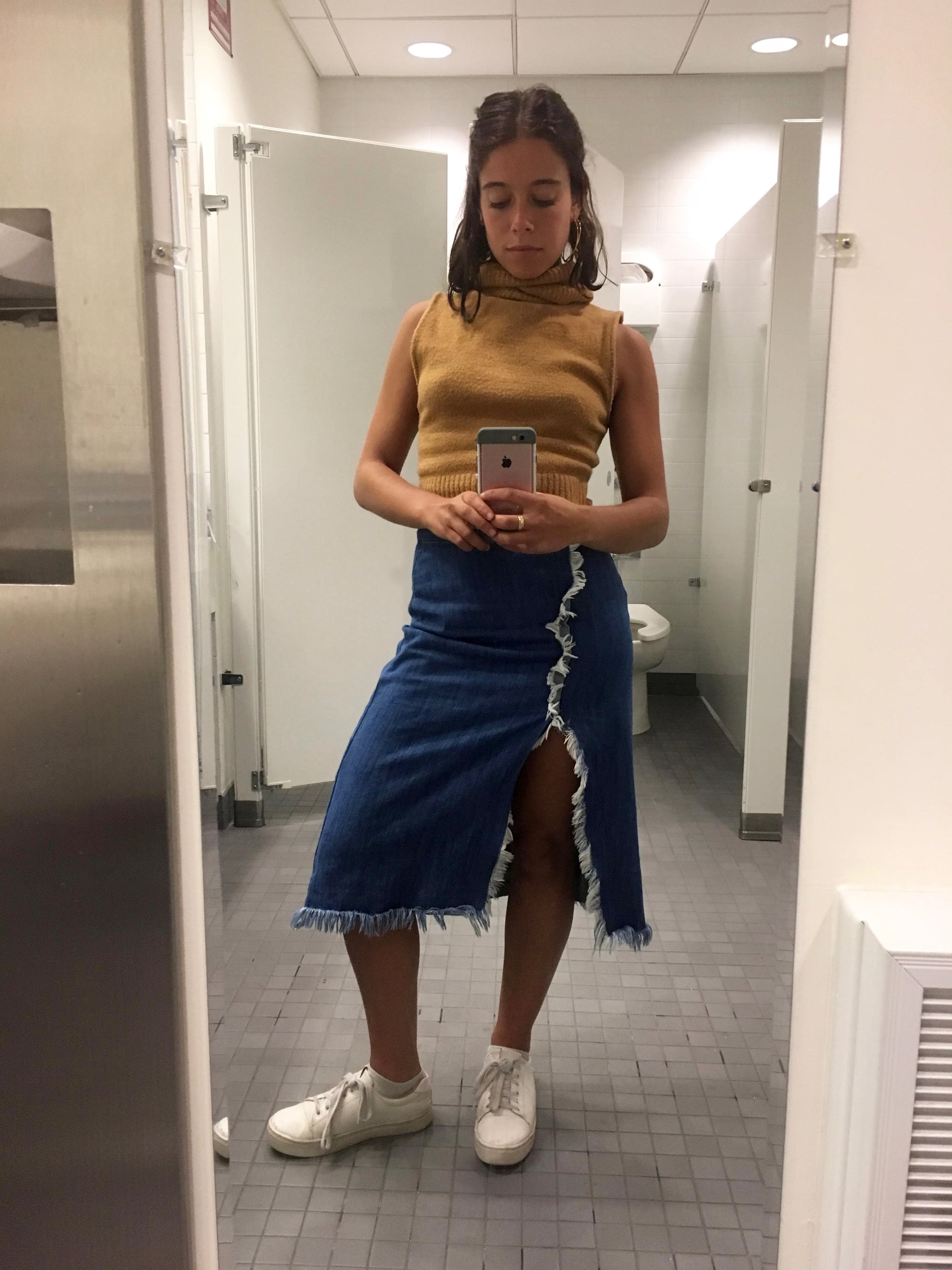 I hopped off the bus in Times Square and started to walk toward the office. That’s when he saw me. He shook his head back and forth slowly as he stared down at my chest. “Why do you do that?” the man moaned loudly. Yes, seriously. I sped up into a walk-run, suddenly feeling extremely self-conscious.

I was wearing a sleeveless turtleneck in a fuzzy mustard-colored material so as to distract from my nipples as much as possible. Clearly, it wasn’t really working. Plus, a bathroom selfie I had taken in the mirror that morning confirmed it was definitely easy to make out the shape of my boobs. But when I left the house, I had been comfortable. There were no bra straps to slip off my shoulders or underwire to adjust when it dug into my skin. Honestly, I kind of liked the look. I thought my outfit — the aforementioned turtleneck plus a denim skirt with a pair of sneakers — appeared effortless. I added a pair of gold hoop earrings too, which said “polished,” but my nipples were just like “whatever.” “Is this how it feels to dress like a French girl?” I wondered.

But you should know the reason I decided to ditch a bra in the first place. During a brainstorm with my coworkers, I came up with the idea as an “editor experiment” based on the fact that Kendall Jenner has been all about wearing sheer tops that expose her nipple ring and supermodel sisters Bella and Gigi Hadid have followed suit. (The Hadid sisters don’t have nipple rings, but they do have nipples.) And even though these ladies are more well-endowed than I am, they seem very nonchalant about going braless. When I look at their street style shots, I want to put on an outfit that appears to be so easy. “So who’s going to try it?” I challenged, looking around the room during our meeting. “Why don’t you do it?” someone said. Right. I had unknowingly volunteered myself to go braless, and at that point, I couldn’t turn back. 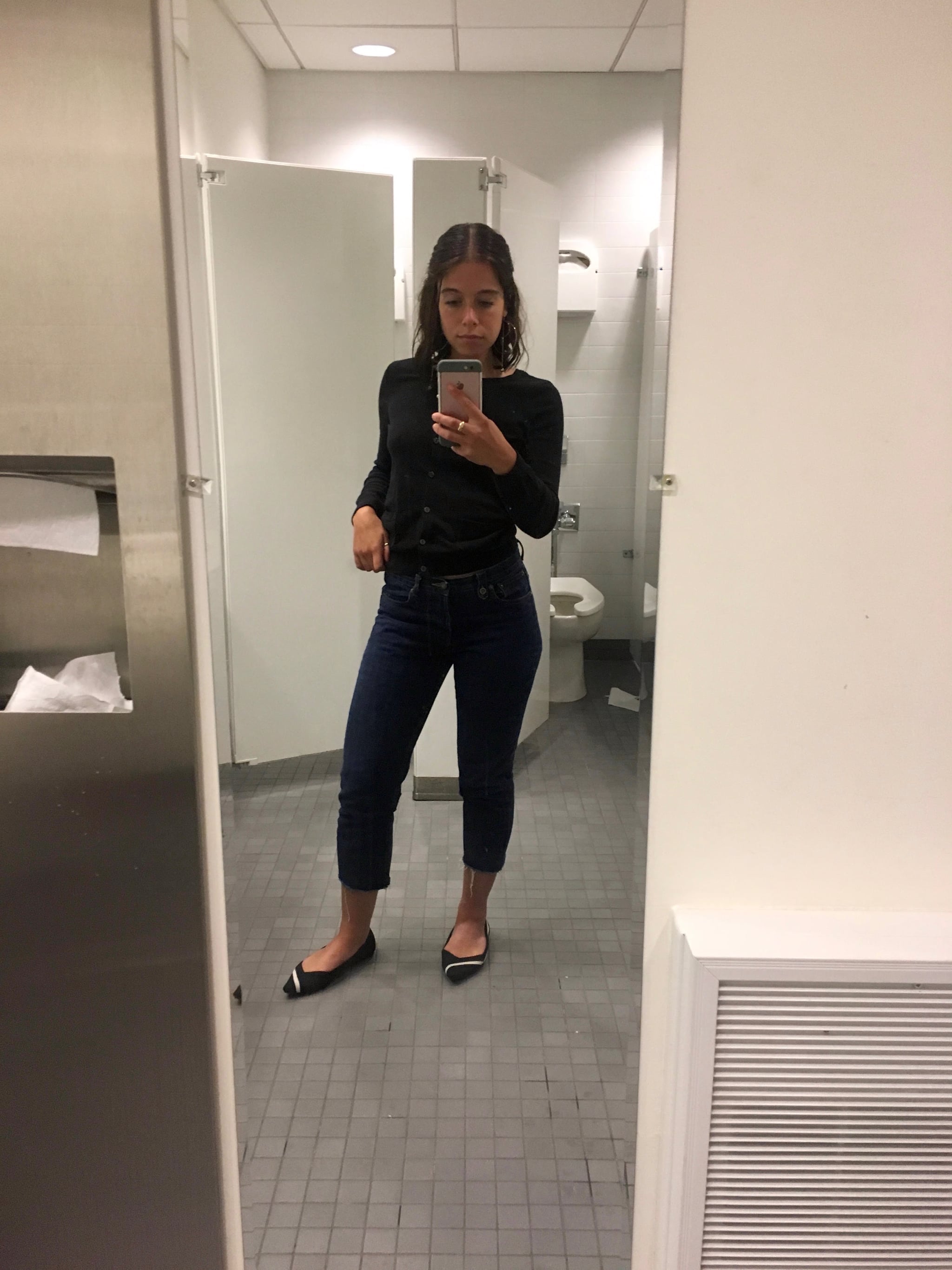 So there I was the next day in a black button-down cardigan — one I usually wear with my Victoria’s Secret Bombshell push-up bra. But on this day, there was more of just a sag situation going on. I styled my sweater with cropped high-waisted denim, pointed-toe flats, and artsy earrings I always get compliments on. I wasn’t trying to distract from my breasts, but I was, perhaps, trying to channel Audrey Hepburn.

“I can totally tell you’re not wearing a bra,” my mom blurted out at dinner on this night, as we sat around the table with my cousin who was visiting, my boyfriend (who probably doesn’t love that I’m writing a Tale of Two Titties to be posted online), my sister, my grandma (who doesn’t even remember where she keeps her bras or what they’re for), and, oh yeah, my dad. “Yes, I guess that’s the point.” I said, again feeling sort of uncomfortable that everyone was now staring at my chest. We’re a supercasual family, so it’s not like this was such a big deal. But I guess I was surprised by how often people were taking note — even when I was wearing black.

I took a final stance on going braless when the weekend came, and I was able to style my “going out” outfits more easily. Since a night out to dinner with Bae called for a pretty little sundress with complicated bow straps, it felt like such a relief not to have to worry about the placement of stick-on boobs, or as some girls call them, “chicken cutlets.” There was zero panic about those guys peeking out from the sides or the top of my dress, and no chance of them slipping down when I started to sweat (partly because it’s Summer and partly because the Cioppino sauce was supposed to be spicy).