They mounted the sweeping steps of the Metropolitan Museum of Art long after night had fallen, the celebrities and models and socialites and titans of business, the 1,000 special guests in their finery and furs, past the paparazzi and a row of ushers standing at attention like a newfangled Praetorian Guard.

Anna Wintour was there, in long black velvet and gold, rubbing shoulders with Blake Lively and Stephen Schwarzman and Penélope Cruz and Kaia Gerber and Lily-Rose Depp. They sipped Champagne and declined the canapés, and then strolled through the Egyptian collection to the Temple of Dendur, glowing under its glass roof.

Wait — it’s December. Isn’t the Met Gala in May?

They could be forgiven for feeling as if they had fallen into a time warp, so strongly associated are that fashion party and this museum. Only a brave soul would dare to follow in those footsteps. But then no one ever said that Karl Lagerfeld, the designer of Chanel (among many other things), lacked ambition. 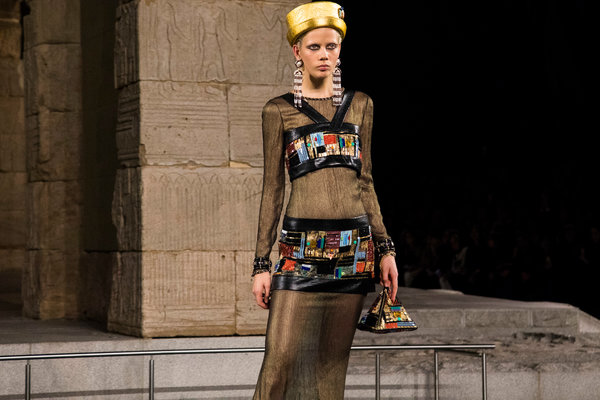 It was his idea to bring the Chanel Métiers d’Art — the annual show to honor the craftsmanship of the specialist workshops Chanel has acquired over the years and keeps independent to preserve their skills — to New York this year. Because for him, and for Gabrielle Chanel, the city is “a point of reference — the city where nothing is impossible” (as a news release said).

A French brand can even have a fashion show in the Met! It’s a big deal, and one that’s reflective of Mr. Lagerfeld’s big visions.

The problem is, compared with the annual red carpet fashion show that is the Gala, a normal fashion show is bound to be something of a letdown.

Unlike the Chanel ready-to-wear and couture shows held in the Grand Palais in Paris and famous for having the most elaborate sets of the season — in October, Mr. Lagerfeld had an entire beach constructed indoors, complete with ebbing and rising tides and sand dunes — the designer didn’t try to gussy up the Temple of Dendur, which dates from 10 B.C., perhaps understanding that to do so would simply have been hubris. As a result, unlike the Met Gala, which holds its dinner there, viewers could actually see the temple, something of a treat. Although it did pretty much dwarf the models who appeared in its shadow.

Wearing, yup, a whole collection inspired by Egypt (in case you missed it, sections of the soundtrack also went “Egypt, Egypt, Egypt”). In desert shades of gold and sandstone, on a base of long white chiffon gowns, it featured oversize glinting bouclé jackets and miniskirts shaped to reference the wrapped skirts of Egyptian men visible in temple paintings and pottery, with corresponding exaggerated plastron collars on pretty much everything.

Gold leather hats resembled turbans, clutches came in the shape of pyramids, bejeweled scarabs shone from evening columns, and gold leather boots were printed à la asp or crocodile. (Before the show, the brand had announced it was following peers like Gucci, Versace and Michael Kors in discontinuing the use of real exotic skins and fur, which may be the biggest trend of the season.) There was blouson distressed denim and degradé leather trousers and graffiti prints by the artist Cyril Kongo, in a nod to the streets of New York. And there was Pharrell Williams, a Chanel ambassador, as a grown-up King Tut, in gold leather trousers and a long, gold, ribbed-knit sweater with a collar of colored stones. Subtle it was not. Shiny, very much so.

As always with Mr. Lagerfeld, many of the pieces were eye-popping in their work: He understands more intimately than almost any other designer the ability of the atelier to achieve the seemingly impossible in form and fabric. But the net effect veered uncomfortably close to Liz Taylor-as-Cleopatra kitsch mixed with The Bangles circa 1986. It felt out of place in 2018.

At the end of the show, Mr. Lagerfeld took his bow accompanied as usual by Hudson Kroenig, his godson, who had also walked the runway, as well as his right-hand woman, Virginie Viard. There has been much speculation on succession at the House of Chanel, and this is bound to add fuel to the rumors. (First, it was Hedi Slimane who was supposed to take over; since he went to Celine, people are buzzing about the currently unemployed Phoebe Philo — especially since Chanel relocated its global headquarters to London.)

For the moment, however, Mr. Lagerfeld was Pharoah. And the papyrus in the nearby reflecting pools swayed in his breeze.