The Duke and Duchess of Sussex kicked off their visit with a bang by announcing they are expecting a baby in Spring 2019. 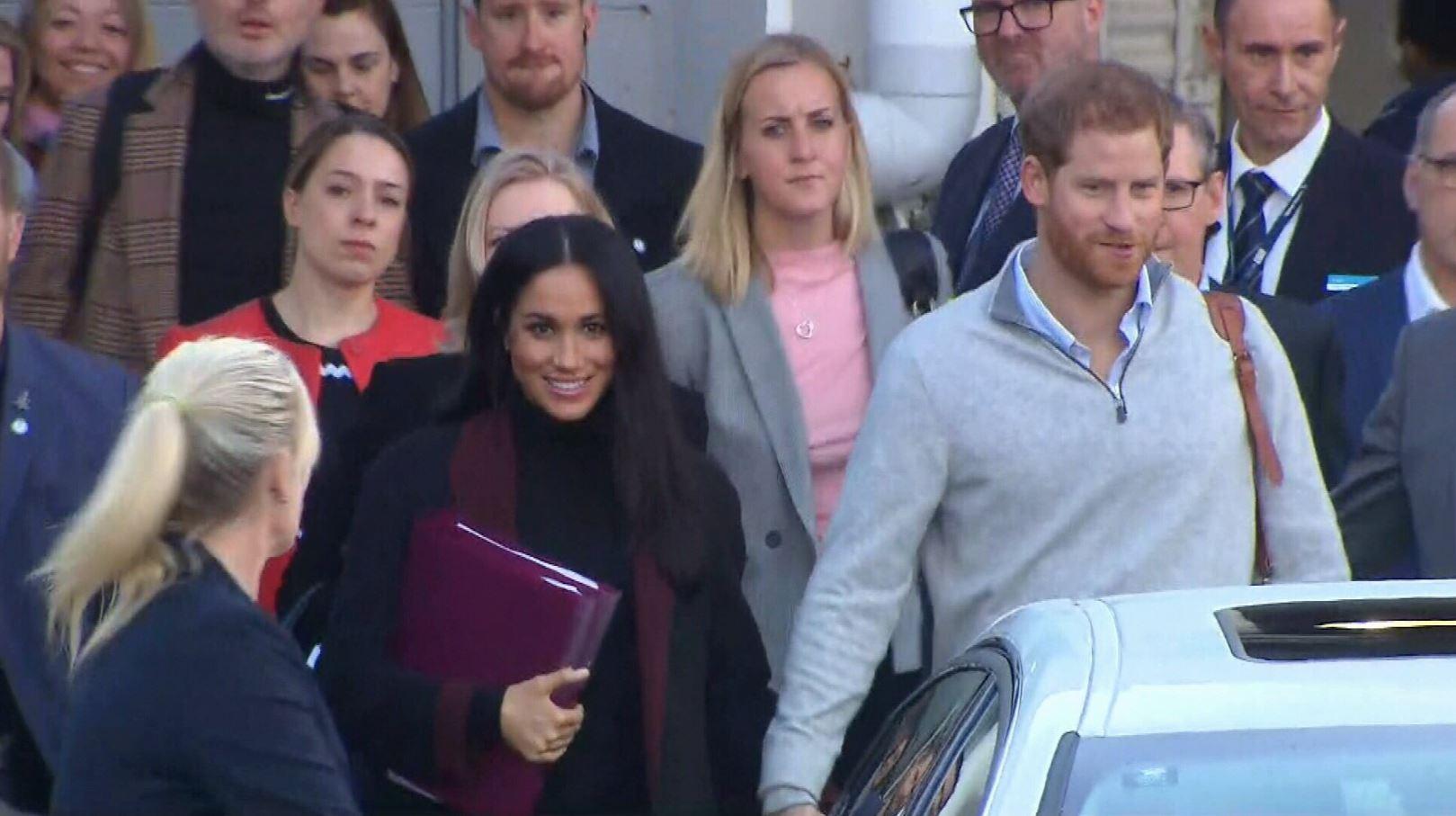 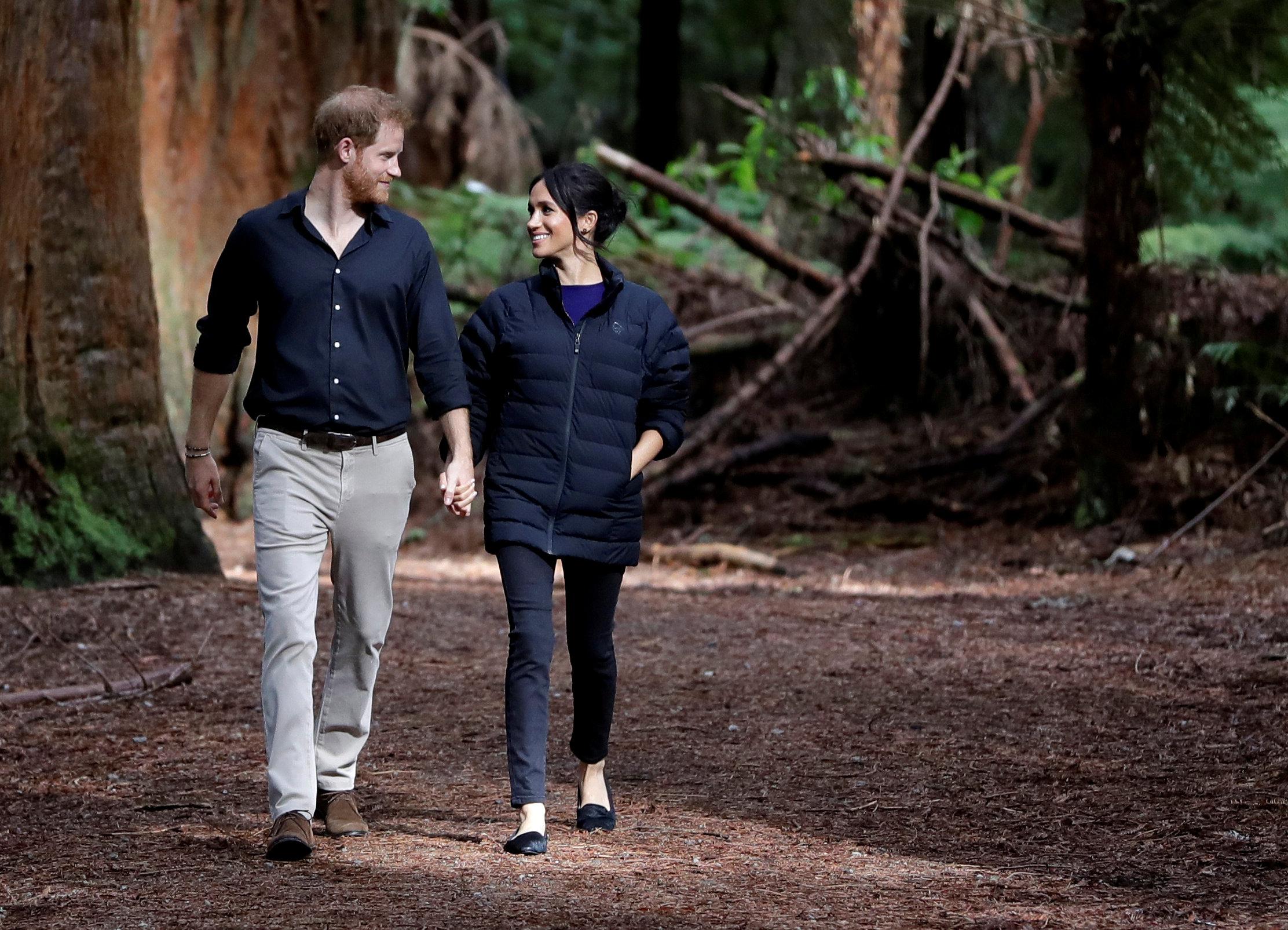 During their trip fans have noticed the pair seem more in love than ever, nearly always touching, holding hands or beaming with happiness.

But what does their body language really show us?

According to expert Judi James, Meghan shows signs of being 'the boss' but is sensitive enough to nurse Harry's ego when he needs it. Here she decodes their poses… 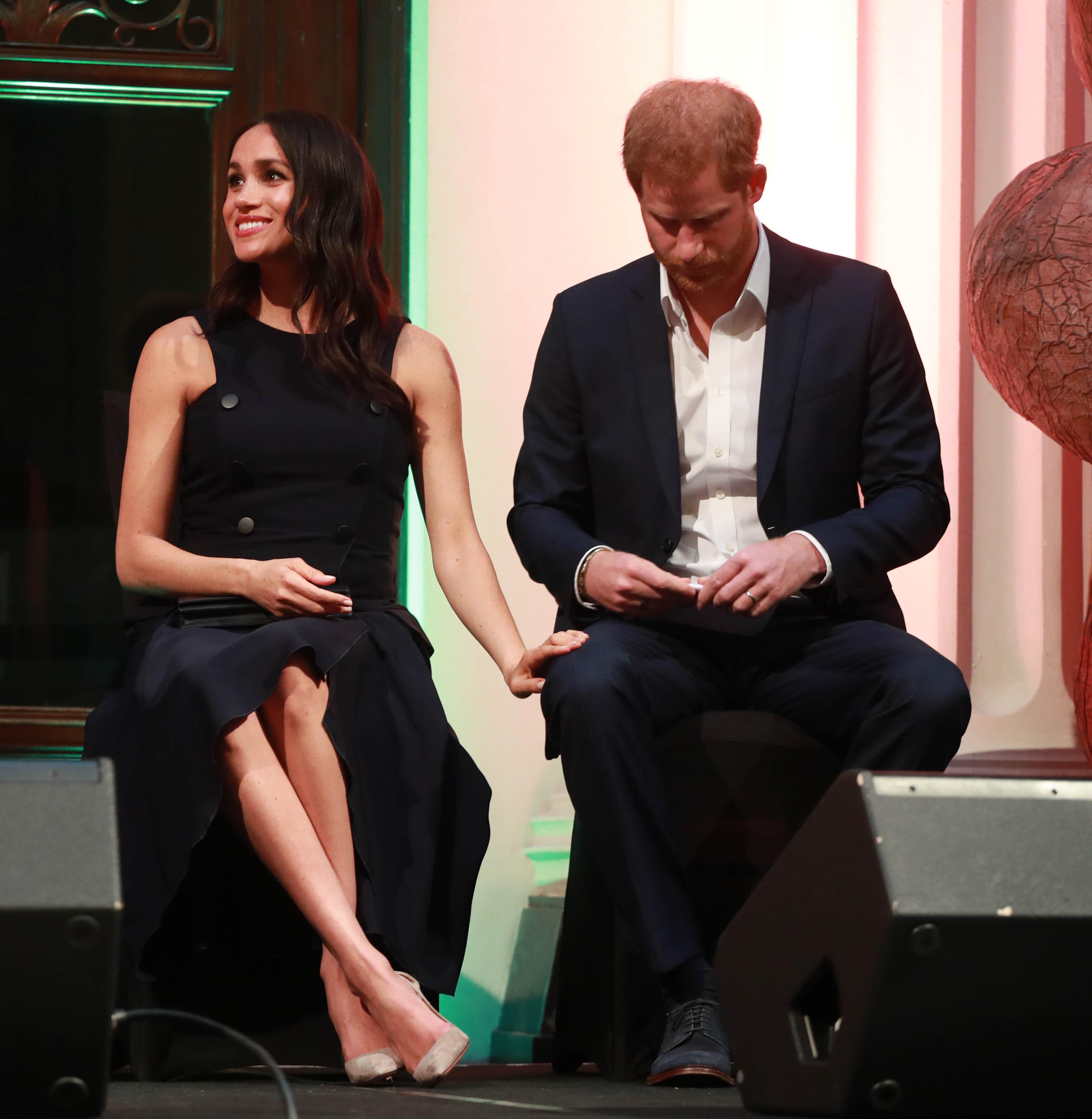 "This gesture could look intimate and quite sexual but it might also have an ulterior motive," says Judi.

"Firstly it suggests dominance from Meghan, who reaches across to place a hand on Harry's thigh.

"It's quasi-maternal here, the kind of checking, reminding or restraining gesture a mother might to when her kid is distracted or inattentive.

"Which looks very much the case with Harry here.

"Meghan is in grown up role here, the boss, listening to her hosts and performing a sociable smile but Harry seems to need reminded to stay focused."

The Arm Grab = Boosting his ego 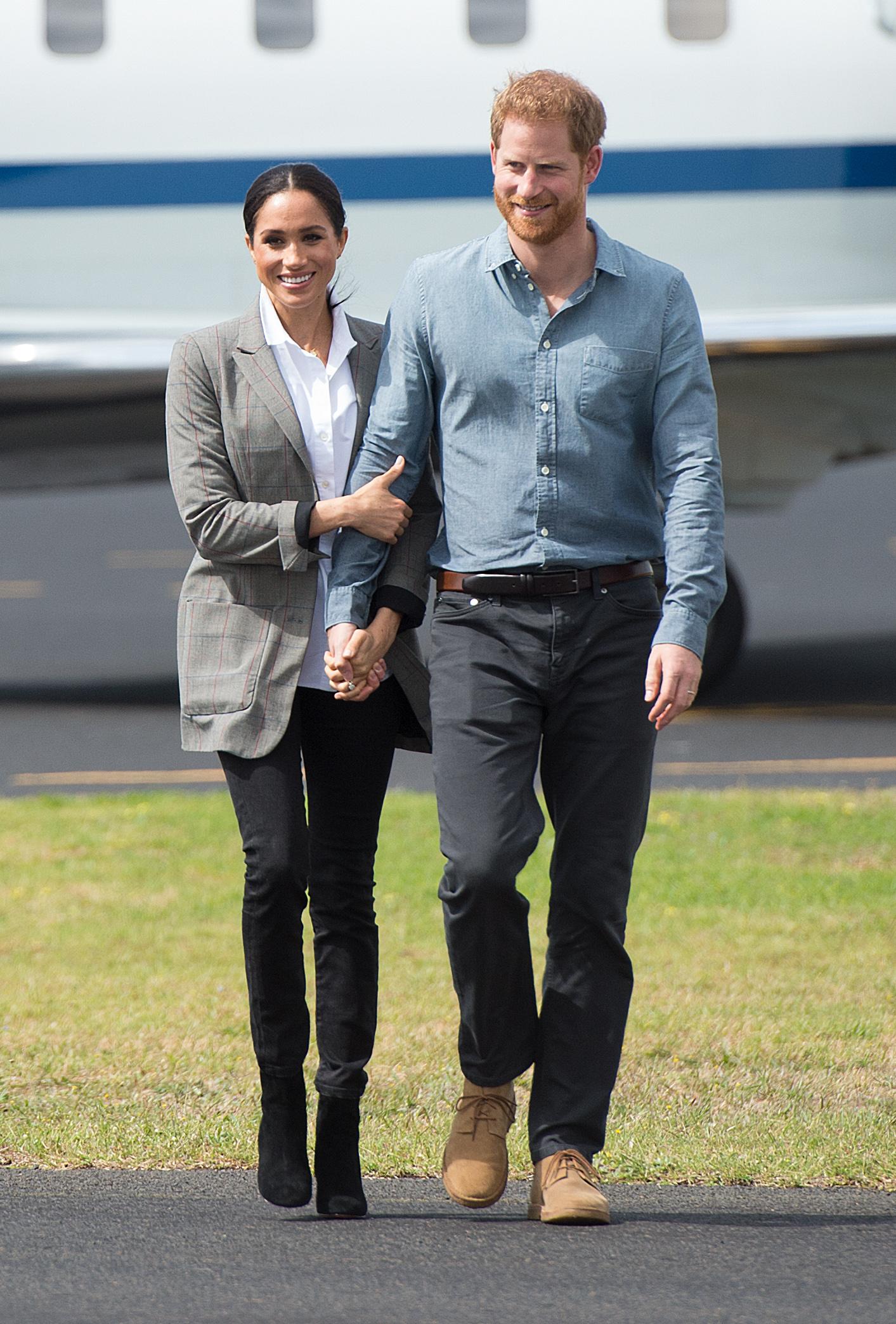 "This tends to be a very early stages of passionate love gesture, when the woman grabs her guy's arm as well as his hand to allow for torso proximity as well as intimate hand touch," Judi observes.

"Their hand clasp is very tight here with both curling their fingers up to signal intimate love and a desire to not be split up, but Meghan double-endorses the message by adding a strong signal of ownership and intimacy to the clasp.

"This bicep-hugging can look rather needy but it is ultimately flattering to the man whose arm muscles and therefore strength is being praised and shown off.

"It’s part of the hero-worship rituals that Meghan performs with Harry to boost his ego." 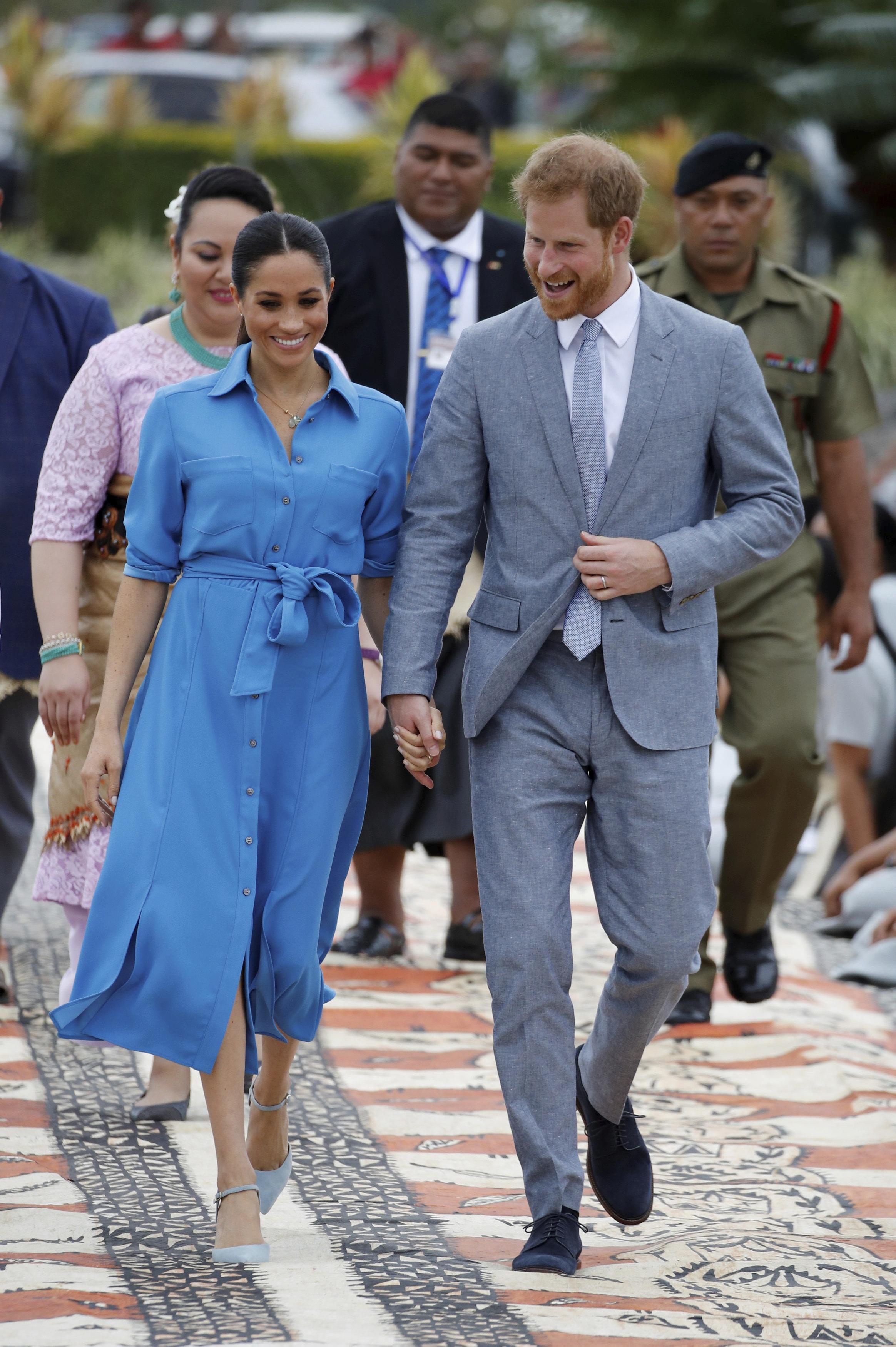 "When Meghan and Harry are walking in a larger space their hand-holding often involves mutually curled fingers.

"But when they are close to meeting and greeting hosts and fans the hand-hold gesture isn't normally part of the royal norm as handshakes will be on the cards.

"This is probably why the pair are often seen using this one-sided hand clasp with Meghan's fingers curled while his are straight.

"However Prince Harry's habit of placing his hand on top in a hand clasp implies a level of protectiveness over his pregnant wife." 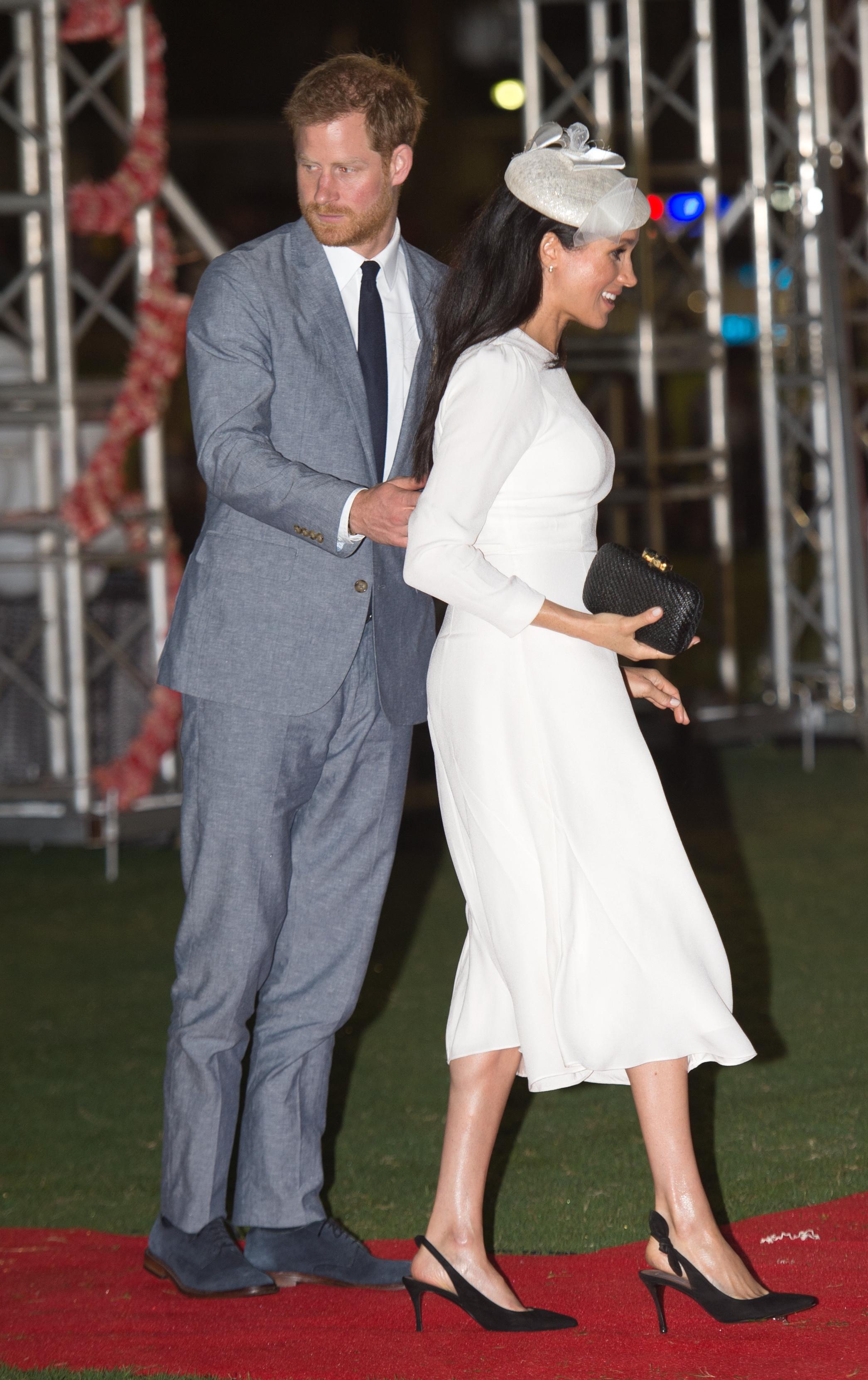 "This is Harry in controlling mode, flexing his more experienced royal credentials by the use if this kind of non-verbal tie-sign," Judi says.

"Although Meghan is often out front meeting people and fully, actively sociable as she is in this pose, getting involved in what can often my much more detailed and in-depth discussions with hosts and fans that the royals might usually engage in, Harry knows all about schedules, timing and choreography.

"Hence the fact that she is often smiling happily when Harry performs this gentle 'keep moving' gesture while his frown suggests some mild anxiety.

"The couple regularly use these small pats and touches to communicate and it's a technique more commonly seen on the red carpets in Hollywood when A-list power couples want to pose together and walk on and off in unison."

The Tummy Cradle = Reassuring him 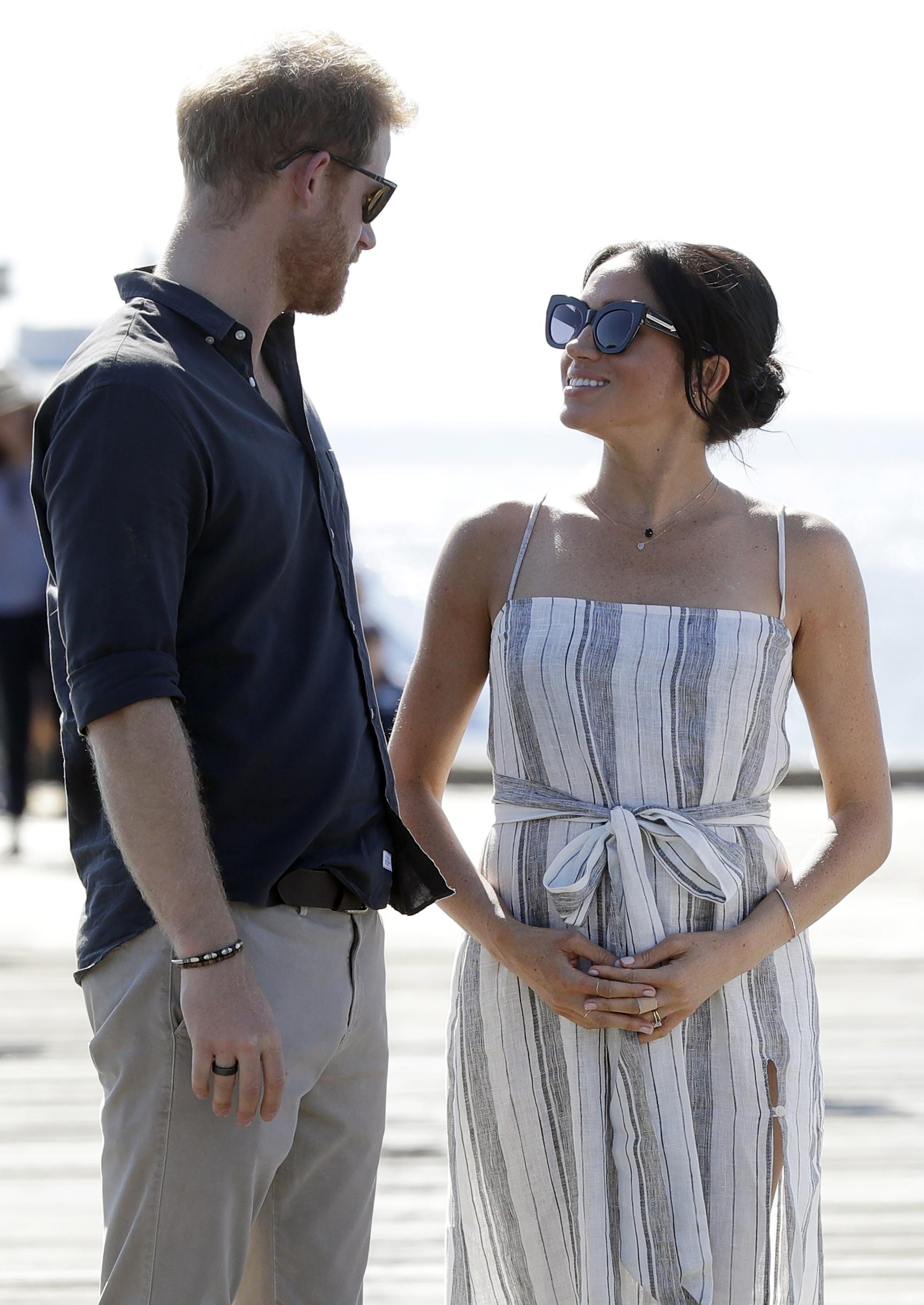 "As if Harry needed any reminding that his wife is pregnant, but Meghan's bump-cradling gesture ensures their good news is right at the forefront of her husband's mind," Judi explains.

"He is already showing acute signs of anxiety mixed with excitement and constantly seems to be throwing her looks to ask if she's really alright, but Meghan's cradling gesture is guaranteed to give him a huge burst of happiness hormones while her happy smile reassures him as well.

"She's also moving her own role into one of motherhood with this gesture.

"The stages between girlfriend to wife to mother-to-be have been quite quick for a royal couple and 'reminder' gestures like this of her new role will help wean Harry off all the undivided adoration he's been getting from Meghan to date and which he will be needing to share in future."

The Tow Along = Allowing him to be the alpha 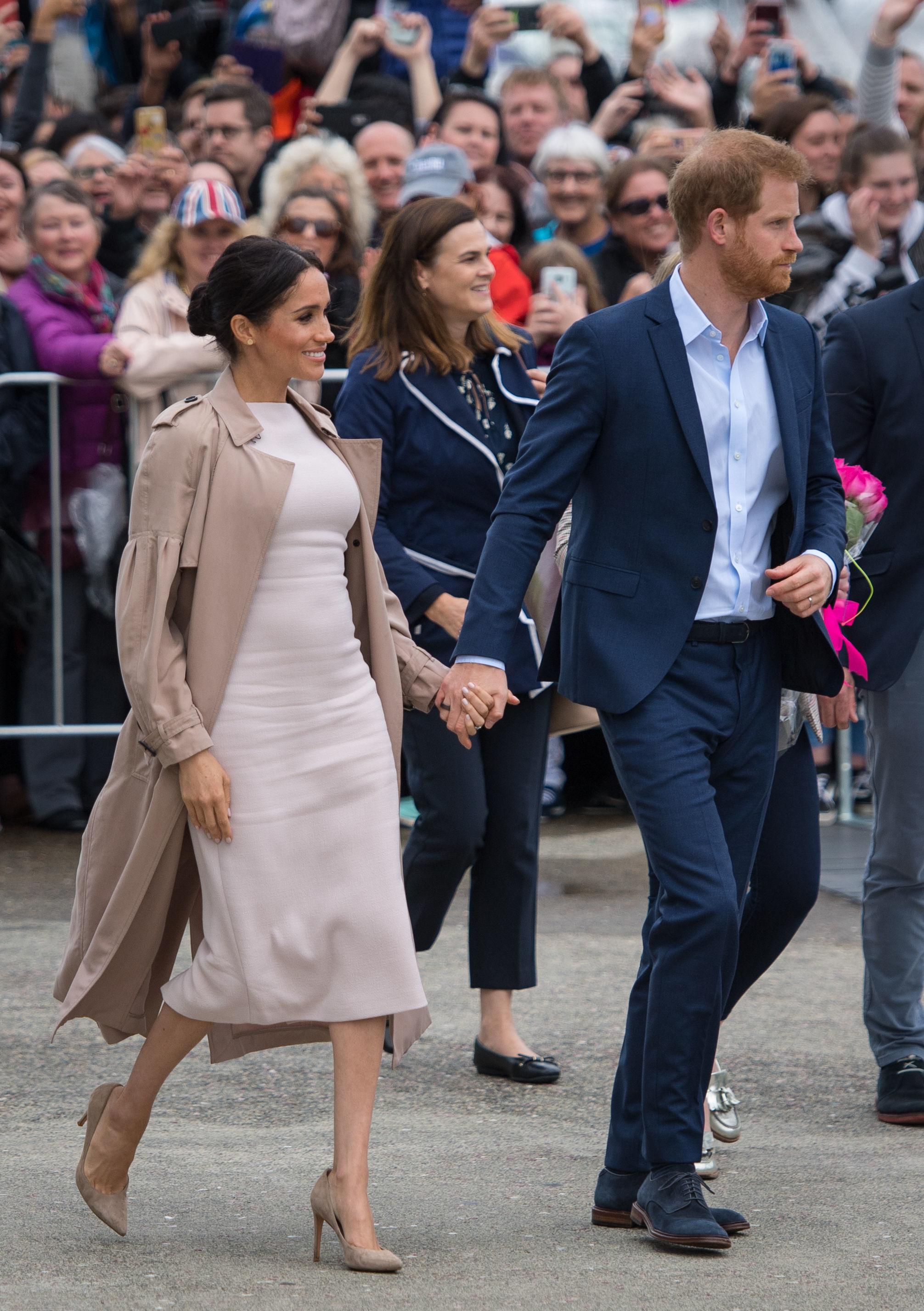 "Of the two of them it's Meghan generally showing the higher levels of confidence but she often opts to walk slightly behind her husband which could be a nod to royal protocol but which I would see as another nod to celebrity power couple status," says Judi.

"Celebrity men do usually tow their women along when they're appearing in public.

"It makes the woman look special and precious while the guy gets to look protective and very alpha.

"Meghan might be a feminist but by allowing herself to be towed along by her husband she flatters Harry and gives him what might be a valuable boost to his masculine ego."

The Mirror = Deeply in love 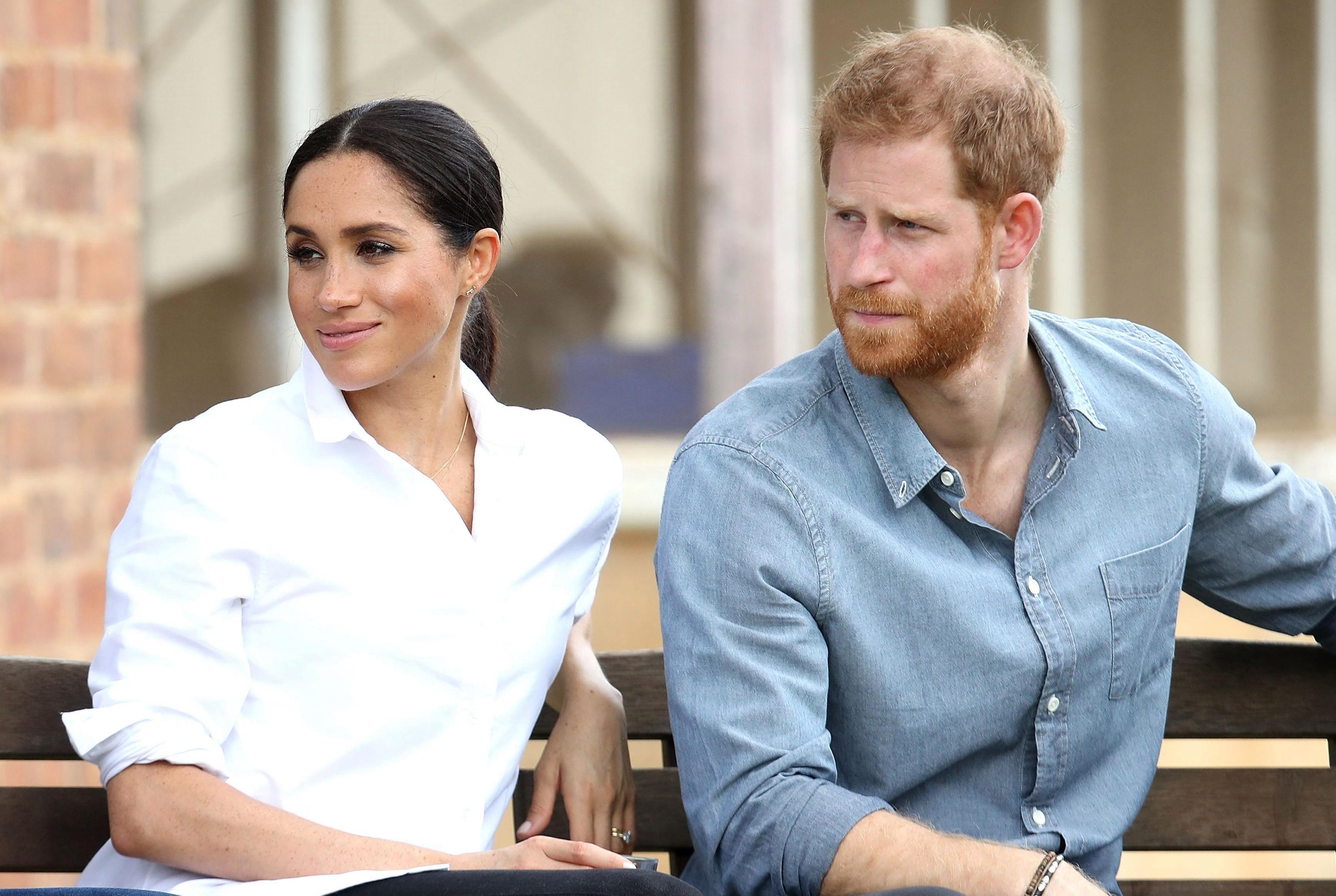 "Like-bodied suggests like-minded, so postural echo or mirroring like this should signal that Harry and Meghan think alike as well as being deeply in love," Judi observes.

"Often it will be subliminal.

"When a couple are this loved-up they will often move or stand in the same way even when they are out of eye-sight, but there are subtle hints here that Meghan might be putting a little amount of effort in to flatter her man via some body language mimicry as he looks more comfortable and natural in the pose."

In more Meghan news, the Duchess steps out in daring see-through skirt on final afternoon of her and Prince Harry’s first overseas tour.