My friend and I were intimidated by the pristine white cashmere couch in the Gabriela Hearst store in the Carlyle Hotel. “You can sit!” the saleswoman insisted. The store had been open a week when we were there. Can you imagine being the first customer to graze its edge with a November boot?

Then again, the designer Gabriela Hearst grew up in Uruguay in one of the country’s oldest sheep ranching families. The earthy, layered gray of a well-roamed, dusty sheep must be one of her favorite colors. (Sheep from the family ranch supply the wool in her collections.)

We probably could have sat, but we didn’t risk it.

The store is so beautiful, with all of its materials made sans synthetics or chemicals, the marble-and-wood tiled floor made with reclaimed oak. The standout artwork is a quilt made by the great-grandmother of Ms. Hearst’s husband, Austin, in the late 1800s, tiny bars of color and sheen patched into herringbone with careful artistry.

A saleswomen said the piece inspired Ms. Hearst’s first collection. The lure of this label is a combination of personal mythology (hers and her husband’s family’s) and true attention to sustainable production. It doesn’t feel frivolous, but carefully matched and inlaid, like the wood and marble in a wool coat’s belt buckle.

One surprise is that there are no mannequins, and you see only a few of her coveted bags from the windows, or even when you walk in. Leather, satin and crocodile gems are tucked in the back. The bags are named for famous singers. There’s the Joni, which looks like a chest of drawers; the Patsy, inspired by lunch pails women took into the work force in the 1940s; and the Diana, an accordion sculpture. They come with a microchip to confirm authenticity.

Not that you can get your hands on them. Gabriela Hearst is the antithesis of fast fashion. All accessories — a tiny gold pinkie signet ring with lapis lazuli inlay ($1,900), a Billie crocodile mini backpack ($19,000, $2,750 in lambskin) — are available by order only.

I can’t afford one of the beanies ($250), but then again, I’ve never seen a beanie displayed under glass. I was on the fence. I imagined it was a fence in Uruguay. I gazed, sheep grazed in fields stretching out to mountains. Then there was a sign: No returns. Seven days for store credit. Customers must be as intentional with purchases as the company is with material. I respectfully put the beanie down.

Time to touch some other knits! I tried on a navy wool turtleneck ($690) that slopes out at the waist, and a cornflower cashmere-silk turtleneck ($590) with open-knit diamonds woven into chakra points at the sternum and stomach. They were so soft, like sliding into cool water while cuddling a silky chicken. It makes you tingle, like wearable A.S.M.R.

Most know Gabriela Hearst for her bags, but she makes a great suit, too. I tried on a double-breasted red-and-black check blazer ($1,995). Inside the pocket was a notice: “This garment has an interior pocket engineered with silver plated fabric which adds both antimicrobial and radio wave shielding properties.”

I picked up a pair of shoes, platforms stacked with brown, black and marble leather like a layered terrine ($1,595). I reverted to the “pretend it’s a phone” gesture, a gag that will die with my generation. Phones don’t look like platform shoes anymore; platform shoes look like the memory of phones.

Who was calling? It was the saleswoman, gently suggesting that these particular strap-on antiquities are not for getting your steps in. They are best for going to an event via car. Electric car, I’m sure. 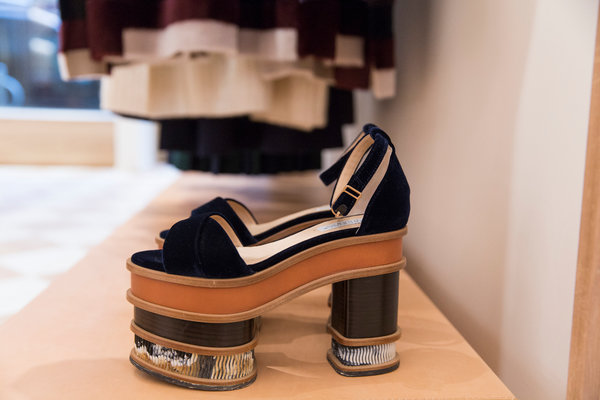 In the middle of all this we were treated to a mini drama. A woman entered in a cinematic huff and said, “I need a dress!”

“Just a dress,” the woman said. Nothing more. I continued to shop but could not stop turning her utterance over in my mind.

Speaking of, there’s a silk pleated dress in the shop printed with old Hearst newspapers and roses. The roses start small, budded at the top of the dress, and get bigger, to snowball-size blooms at the hem. Could this be a “Citizen Kane”-inspired in joke for critics of the Hearst family legacy of yellow journalism?

I think Ms. Hearst likes a smart prod. For example, she told reporters the collection currently in store was inspired in part by images of 19th-century women coal miners. To aestheticize this work wear in fabrics made in an effort to model a pivot for the fashion industry’s harmful impact on the environment is fascinating tension. As a society, we often don’t think about who suffers or goes underground for our progress, our luxury.

I’d think I’m overthinking, but Gabriela Hearst is the queen of subtlety. These clothes are made with many layers of intention, and are housed accordingly. In this store, pieces are anything but just a sweater, just a bag, just a dress.