El Espace is a column dedicated to news and culture relevant to Latinx communities. Expect politics, arts, analysis, personal essays and more. ¿Lo mejor? It’ll be in Spanish and English, so you can forward it to your tía, your primo Lalo or anyone else (read: everyone).

The paradox of working in media is that even as your mind expands, your world also shrinks a bit. Because of my job, I read a lot of news, then go on Twitter to read people’s hot takes, then listen to podcasts, you know, just to round out the picture. It’s extra, for sure. But while there’s no question that my understanding of topics like foreign relations, economics and the president’s taxes, to name a few, has gone from zero to at least 80 in the last few years, the overexposure has also distorted my perception about what “everyone” knows.

Fortunately our readers keep me accountable. In my last column, for example, I used the word “Latinx” as a broader term for the Latino community, to some people’s perplexity.

Latinx, meant to be a more feminist, inclusive term that also considers transgender folks or those who don’t identify with the gender binary, has started to pop up more frequently in recent years. So many explainers and articles and videos have been created about why it should or should not be used. The phrase is widely adopted on college campuses and by activists, and in September, Merriam-Webster added it to the dictionary. But many are still critical of the word, and they expressed as much in our Facebook comments. 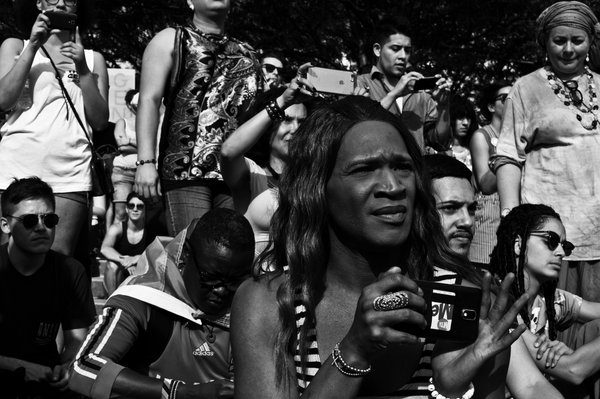 In part, it’s a linguistic issue: Latinx just doesn’t translate to Spanish, some argued. A commenter from Ohio wrote that, if you’re a Spanish speaker, “the term Latinx reads like a thousand nails in a thousand blackboards.” Some readers in Latin America said it was an Anglicization that wasn’t relevant in their home countries. Another implied that the term is elitist, writing that the word Latinx “ostracizes all the speakers of Spanish who don’t have wealth or time to pontificate the ‘oppression’ of a language which at its very root genders everything.” In a very official poll on my personal Facebook page, some friends and family said that they’d never even heard of it.

So, should it be used at all?

Kim Potowski, a professor at the University of Illinois who specializes in Spanish linguistics, tried to employ inclusive language in a forthcoming Spanish grammar book, but replacing the masculine “O” throughout overwhelmed her and her co-writer, Naomi L. Shin. “It came to a point where we said, ‘You know what, we’re not ready,’” she said. Maybe in the fourth or fifth edition of the book, she added, “we will have those X’s in there.”

“There is absolutely no consensus among linguists,” said Dr. Potowski.

Another scholar, Lourdes Torres, a professor of Latino studies at DePaul University in Chicago, argues that the word Latinx undermines hard-fought feminist battles. “In its attempt to be gender-inclusive,” she said, “one can argue that it’s gender-erasing of women who have fought for a long time to not just have Latino, but to have Latino/Latina, to make sure women are represented.”

But they do agree that language evolves with the culture.

“As social factors change, sometimes the language has to change,” said Dr. Torres. “The people who use the language are the ones who determine what it is.” She and Dr. Potowski both gave words like “presidenta” or “jefa” as examples; neither existed until women entered the work force and took on those roles.

Ed Morales, a Columbia University professor who wrote “Latinx: The New Force in American Politics and Culture,” agrees. In a recent conversation he said that “the X, which is so strange and is not Spanish, sort of marks this new hybrid idea.” The title of his book, similarly, was meant to be forward-looking. “I thought it was a futurist term,” he said, “imagining a future of more inclusion for people that don’t conform to the various kinds of rigid identities that exist in the United States.”

Still, the arbiter of Spanish is the Real Academia Española. That entity decides which words make it into the dictionary, and they’re not big fans of Spanglish or Spanish words developed in the United States. In 2012, they added a definition for “estadounidismo,” which translates to Americanism. At first, Dr. Torres said, the word was categorized as a “deformation of Spanish.” Linguists had to push for them to change the official entry.

Dialectical hierarchy is nothing new. Dominicans and Puerto Ricans, for instance, are criticized for dropping word endings or using inventive slang. It’s significant that the Real Academia recognized American Spanish in its pages, but why is it widely perceived as being less valid than the Spanish dialects spoken in other countries?

Because American Spanish is for the youth.

Many young, American Latinos believe that Spain’s official ruling on language erases our African and indigenous roots in favor of European values. Some have argued that Latinx is partly a nod to the gender fluidity that existed among Natives before colonization.

Spanish is the second most spoken language in the United States, and many Hispanic adults feel that it is important for their succeeding generations to keep the language alive in this country. Inevitably, though, new words that meld Spanish and English will be introduced.

The value of the X is that it “provokes conversation about who we’re including and who we’re not including in our communities,” she said. But that doesn’t mean everybody has to use it.

“If you talk to my dad or my tía, that’s just another silly academic or political thing,” Dr. Torres said. “It’s definitely of a certain world.”

Still, she said, even if the terms are not always understood, it’s important to be “inclusive of all those identities that have had less visibility in our conversations, in our books, in our movies.” If we can, she said, “it would be a really powerful thing.”

Tweet me your thoughts about the word Latinx: @bycdl.

Here are more stories to read this week.

An animated guide to getting out of social obligations this holiday season, with some help from the comedian Lorelei Ramirez.

Representative-elect Alexandria Ocasio Cortez is using Instagram to give voters insight into the political process. We’re in there!

And on the topic of gender fluidity: Jenna Wortham explored the ways nonbinary people are using Instagram to reflect their identities and the (male) writer Kalle Oskari Mattila offered a strong endorsement of women’s clothing.

BuzzFeed News did some excellent reporting on the backlash in Mexico to the Central American immigrants making their way through the country. “These people are a Cancer that signals the end of Mexico,” read one message in a private WhatsApp group.

It was a big night for Latinas at this year’s National Book Awards. The Dominican poet Elizabeth Acevedo won in the category of Young People’s Literature; Sigrid Nunez won the award for fiction; and Isabel Allende was given a lifetime achievement award. I was cheering from the bleachers.

Here’s why women are twice as likely to suffer from severe stress and anxiety as men.

Nike dropped their Dominican-inspired “De Lo Mio” Air Force 1s last week, and I’m still recovering. The sneaker (which is already sold out, waaaah) is fire, as are the pictures from their ad campaign, taken by six Dominican photographers. Scroll and get your life. (And we’ll all hold out hope that Nike will re-up on the shoes).

Do you have suggestions for El Espace? Want to receive it as a newsletter? Let me know: [email protected]

Concepción de León is the digital staff writer for the Books Desk. She covers book news, writes the weekly Newsbook column and contributes to the Travel section, suggesting books from around the world. She previously worked for Glamour magazine.