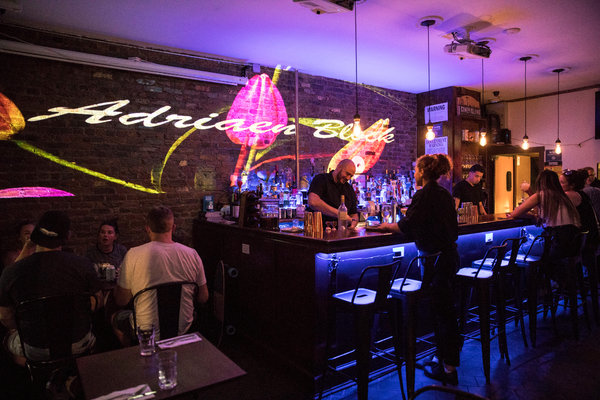 There are CBD massage parlors, CBD bakeries and even CBD cafes. So it was only matter of time before a bar would join this bandwagon. Adriaen Block, which opened in August, bills itself as the first CBD restaurant and bar in New York City, with four lower-alcohol cocktails infused with cannabidiol derived from hemp.

Zsolt Csonka, 41, who owns the bar, said he wanted to create a more good-humored joint, without the usual “cursing and screaming” of drunk patrons. “People feel just wonderful, chilled, relaxed, calm, mellow,” Mr. Csonka said, regarding the effects of CBD on his patrons. “Then, everyone is able to get up and walk home in a decent manner.”

Close to Astoria Park, it straddles the quiet, almost suburban corner of 21st Street and Ditmars Boulevard on a stretch that’s less commercial and bustling than the blocks near the subway station. Outside, there is a mural of the Hell Gate bridge with the bar’s namesake, a 1614 Dutch explorer who discovered the area. Inside, the neutral décor is dominated by large windows and a colorful projection of blooming flowers against exposed brick.

On a recent Thursday night, the scene reflected Astoria’s ethnic diversity. A middle-aged married couple were sipping wine and speaking French by the open glass doors, while a Latino family of four were seated across the room having dinner. (It wasn’t clear if any of them ordered the CBD sauce to go along with their steaks.).

At the bar were three single men, in their late 20s to early 40s, wearing straw cowboy hats and bushy beards. The weekend crowd tends to be younger, with more of the professionals now colonizing the area.

Mr. Csonka is in charge of the bar’s Spotify playlist, which leans on indie rock from the 2000s (the Killers, MGMT), mixed with some classics from the 1980s (Queen, Dexys Midnight Runners).

On weeknights, it’s easy to walk in and grab one of the 30 table seats or 10 bar stools. On weekends, there is a red velvet rope to manage occasional lines; the wait can be anywhere from a few minutes to an hour. Reservations are accepted.

The CBD drinks come with or without alcohol. The Stoney Negroni ($15), like the other CBD cocktails, are made with less liquor and taste a little sweet. Virgin drinks include the Garden & Tonic ($15), which mixes Seedlip, an extract made from plants, with Indian tonic, a sprig of rosemary and a handful of peas. It’s served in an icy goblet along with a plastic dropper of CBD.