Because marriage is an ever-evolving experience, we constantly shift, change and, in some cases, start over. In It’s No Secret, couples share thoughts about commitment and tell us what they have learned along the way, revealing their secret to making it work.

Occupations Ms. Lewis is a former jingle writer turned real estate broker for the Corcoran Group; Ms. Sager is the director of listings at Citi Habitats.

Their Marriage 3 years, 6 months and counting.

The couple married May 16, 2015 before more than 120 guests at the Down Town Association in Manhattan’s Financial District. They were supposed to marry at Ramscale Studio, a loft space in the West Village, but the air-conditioner broke four days before the wedding. Ms. Sager’s boss, Gary L. Malin, the president of Citi Habitats who became a Universal Life minister, officiated. Ms. Lewis’s mother, who was too ill to attend, watched via FaceTime. The couple walked down the aisle to two versions of “One Fine Day” (by the Chiffons and Natalie Merchant). They live in Chelsea with their rescue hound, Mia.

In 1998, Ms. Lewis got a call from a friend saying she was going to a bar with some gal pals; there was someone she wanted her to meet, a possible love interest. “I was recently single,” she said. “I was dating a lot. When she told me Nancy was 40 I said, ‘She’s too old.’” At the time Ms. Lewis was 39. “I had a proclivity for younger people,” she added.

Ms. Lewis stood her ground, but agreed to phone Ms. Sager the following day. “Within five seconds we were joking and connected in sarcasm,” Ms. Lewis said. “It was as if we had know each other for years.”

The call turned into meeting for a drink. The drink led to dinner two days later, which morphed into an overnight. Hours and hours of phone calls followed. “We could talk until 1 or 3 in the morning,” Ms. Lewis said. “We would fall asleep on the phone. It never got old. I wanted to be with her from Day 1.” And so they were. Years went by, then a decade. Yet no proposal followed. “I wasn’t going to be the one to ask. I’d asked so many times,” Ms. Lewis said. “Nancy never wanted to marry.”

Then on Valentine’s Day 2015, Ms. Sager surprised Ms. Lewis by presenting her with a silver box. Inside were 17 hand-painted cards depicting something symbolic for each year they had been together. “The last card was of a couple getting married with our faces superimposed over theirs. It was the most amazing proposal,” she said. They were married three months later.

Ms. Lewis My mother died shortly after our wedding. Marriage provided me with a sense of safety and family that helped with the profound loss. It made our connection even deeper and more beautiful. 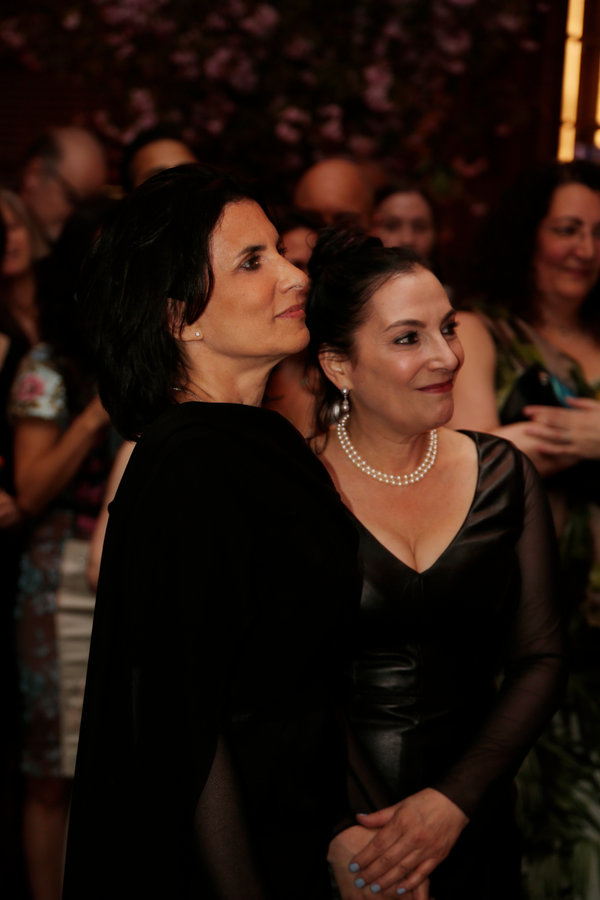 The second I met Nancy, I knew her. It was love at first sight for me. Nancy is very funny, sharp and smart. She’s beautiful inside and out. She’s very succinct and precise; I’m very broad stroke and emotional. I’m better one on one; she’s better in a crowd. I’m a sentimental pack rat; Nancy pares everything down to what she wants and needs. It’s because of those differences that we have a successful relationship. We are each other’s antidepressants. We encourage each other’s positives and successes, and make up for each other’s deficits.

We don’t really argue. We recognize that we have differences. We don’t agree on everything but we have learned to talk it out and agree to disagree. Usually one of us is feeling vulnerable that has nothing to do with the other person, and it splashes onto the relationship.

Over the years, Nancy has become willing to step outside her comfort zone. She’s more open. She can make things succinct and she simplifies the world in a way for me that I probably complicate for her. She’s got an incredible heart, which she doesn’t give away easily. It takes a long time to earn her trust and get to know her. Every day is a little bit of a challenge and that keeps me engaged.

I’ve learned that I’m capable of a deep and lasting commitment, and sustaining interest in someone other than myself. Her challenges, joys and sadness are something I’m interested in, and invested in. Our relationship takes up space. It makes my small world feel expended and large because I have this person to share it with, which is never boring.

Ms. Sager I wasn’t anti-marriage. To me, I was already in a committed relationship. But Laurie really wanted to get married, and I’ve learned if something matters to her, it matters to me. I’ve learned to be less selfish and stubborn. I tend to get into a bubble. Laurie reminds me I’m in a relationship and to be present. That I’m going through this journey with someone else. I love her for that.

Laurie is a kind, gentle, compassionate person. She’s loyal and dependable. She’s smart and has a quick mind. And she’s creative. She’s poetic; I’m pragmatic. And that gets us to a middle ground that’s positive and works.

If either of us is having a bad day we help each other laugh through it. That’s become stronger over the years. She’s made me grow in all my relationships. She’s made me a better version of me. We’ve done that for each other.

As different as we are, we have a lot of similarities: we both come from upper /middle class, Jewish backgrounds. She’s from the suburbs of New York; I’m from the suburbs of Philadelphia. Our parents are from the same generation. We’re both short, dark, and are the same age. We’ve experienced life at the same pace. We get the same cultural references. It’s the same description; there’s comfort in that.

We were together for 17 years before we got married. We already had the power of two. But when you stand up and agree to spend the rest of our lives together, you become a force.

Every morning we have a routine. It always starts with Laurie asking, ‘Do you know what today is?’ It’s my job to answer it: 1,280 days or whatever number it is for the day. That’s how many days we’ve been married. I never get bored of saying it. It’s become part of us.