Mr. Karsh was a portrait photographer who in 1941 took what became the most famous picture of Prime Minister Winston Churchill: the one where he stands, hand on hip, glaring at the lens — and the one that appears on Britain’s 5-pound note. It was taken while Churchill was in Canada, during an improvised shoot.

“Churchill was chomping on a freshly lit cigar,” said Ann Shumard, senior curator of photographs at the Smithsonian’s National Portrait Gallery in Washington. When asked to get rid of it, he obstinately refused. So “Karsh boldly stepped forward and plucked the cigar from Churchill’s mouth and took the picture,” she said. “And he always maintained that that stern expression, as Churchill glowers into the camera, was entirely the result of that snatching of the cigar.”

The classic image — which became “the way that we visualize Churchill,” as Ms. Shumard put it — catapulted Mr. Karsh to international fame and led him to take dozens more black-and-white portraits of newsmakers in the decades that followed. Forty-eight of his portraits of American personalities are now on display through Jan. 20 at the Lowe Art Museum at the University of Florida in Coral Gables. 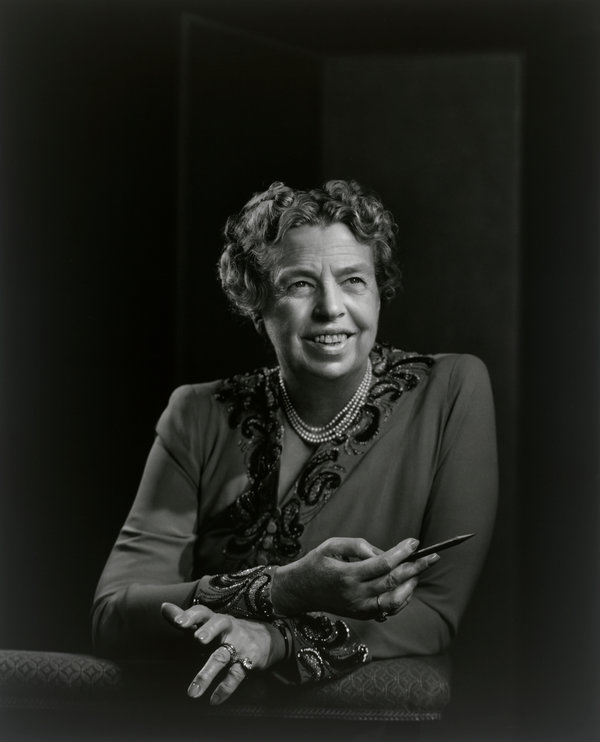 The 48 personalities are individuals who stood out in everything from politics and science to film, culture and business. Many are highly familiar images, such as the one of a sweater-clad Albert Einstein, hands clasped over a tabletop; of the actor Humphrey Bogart, posing with a burning cigarette; and of a smiling Eleanor Roosevelt, a pencil between her fingers.

The show was made possible by a gift of more than 100 photographic prints to the National Portrait Gallery from Mr. Karsh’s widow, Estrellita Karsh. Somewhat unusually, Ms. Shumard was invited to choose the prints herself from the collections of the Karsh estate, she said.

The show has been seen at the Jimmy Carter Presidential Library and Museum in Atlanta (where it was paired with a portrait of the Carters by Mr. Karsh), and at the Dayton Art Institute in Ohio. In early February, it opens at the Rockwell Museum in Corning, N.Y.

The museum earlier showed the portraits in its own galleries in Washington. They proved popular with visitors, so it was decided that they should be sent on tour.

“This is a form of portraiture that is unfamiliar now, in many instances,” Ms. Shumard said, explaining the appeal. “When you’re taking a selfie, you’re definitely not getting the quality of a studio portrait.”

The Karsh shots are also “friendly pictures. They’re not ‘gotcha,’ they’re not paparazzi: they’re respectful and engaging,” she added. “We have many opportunities to see edgier work in the world. I also think there’s a place for something at the other end of the spectrum.”

Kim Sajet, the National Portrait Gallery’s director since 2013, said the museum was putting on touring exhibitions more systematically because “it ties into the strategic direction that we want to be in, which is really to put the ‘national’ into the ‘National Portrait Gallery.’” She said the portrait gallery had so far not been widely known, and was occasionally confused with its namesake in London, so “we’d like to treat the country as our community, and it’s really important for us to get out there.”

Mr. Karsh was born in 1908 in the Armenian town of Mardin — then part of the Ottoman Empire, now part of Turkey. He experienced “some of the worst ethnic cleansing” as a child, according to Ms. Shumard, and in 1922, escaped with his family on foot to Aleppo, Syria. Two years later, he joined his uncle, a photographer named George Nakashian, in Quebec and started learning the discipline from him. He set up his own studio in Canada in 1931 and became a photojournalist, working regularly with the Canadian government. And that’s how the Churchill photo opportunity came up.

Because of his harrowing childhood, Mr. Karsh “could have felt that human beings were, at their core, very evil people to have been responsible for what he had experienced,” Ms. Shumard said. Instead, he determined “to really bring out what he always described as people’s inner power or their beauty. Being a kind, generous spirit was his answer to the evil that he had seen.”

Karsh portraits were (with the exception of that very spontaneous Churchill shot) not spur-of-the-moment affairs. The photographer would spend time talking to the subjects beforehand and do research on them. He had sophisticated lighting in his studio to add contrast and drama to the shot. His photographs often look staged; the artist Georgia O’Keeffe, for instance, is pictured sitting under a pair of antlers, a frequent motif in her painting.

Ms. Sajet — whose museum has drawn throngs of visitors with the unveiling last year of the paintings of President Barack and Michelle Obama — said the portrait gallery aimed to think about portraiture differently, and ensure that what was long “a very elitist art form” would be inclusive by portraying the widest possible range of living people and by showing contemporary art.

Though Mr. Karsh died in 2002 in Boston, where he had moved late in his life, and took pictures of long-gone personalities, he resonates with younger audiences who are curious to know, for instance, what Mr. Einstein looked like, she said.

“Portraiture is always contemporary, even if it was done back in the fourth century B.C. on a fish platter,” because as the viewer, “you’re bringing the moment to it, with all your baggage,” she said. “You the visitor are completing the picture.”