Last month, a video was released of two police officers in Elkhart, Ind., repeatedly punching a handcuffed man in the face. The episode was just the latest in a long-troubled police department where nearly all of its supervisors have disciplinary records.

This is the sort of problem that Congress sought to address in 1994 when it authorized the Justice Department to overhaul troubled local police agencies under court-monitored consent decrees. These agreements lay out a reform plan negotiated by federal law enforcement officials and the local government.

After seeing the videotaped beating, Elkhart’s mayor, Tim Neese, asked the Indiana State Police for a “very thorough and far-reaching” investigation of his police department. But the state police turned him down, so he asked the Justice Department for help. His timing could hardly have been worse. Less than three weeks earlier, Jeff Sessions, who was then the attorney general, had sharply limited the Justice Department’s ability to use court-ordered agreements to address abuses by local police departments. It was one of his last actions before he stepped down.

Mr. Sessions was a longtime opponent of these agreements, complaining that they damaged police morale and smacked of federal overreach. But his critics say his last-minute move is likely to further the Trump administration’s efforts to impede police reforms nationally. For instance, the Obama Justice Department had wanted to revamp the police department in Ville Platte, La., where officers have a long history of jailing people without probable cause. But once Mr. Sessions took over, the Justice Department settled on a watered-down version of the ambitious reform plan Obama administration officials had envisioned. As ProPublica has reported, illegal arrests remain a reality of daily life in Ville Platte.

Consent agreements were an important part of the Obama administration’s efforts to address misconduct allegations. Cleveland entered into a consent decree in May 2015, six months after an officer shot and killed Tamir Rice, a 12-year-old playing with a gun that fired plastic pellets. A report this summer on Cleveland’s continuing reforms cited a nearly 40 percent drop in officers’ use of force from the previous year. Ferguson, Mo., approved a consent decree in 2016, two years after the fatal police shooting of Michael Brown set off widespread protests. At a status hearing this year, a federal judge said she was seeing “a great deal of progress.”

Fourteen cities are currently under consent decrees, from big cities like New Orleans to smaller communities like Warren, Ohio. One frequently cited success story is Seattle, where a 2012 consent decree has been credited with reducing unnecessary uses of force and improving citizens’ trust in officers.

But Mayor Neese may be left on his own trying to fix a department with a tumultuous history.

Elkhart, sometimes called the “RV Capital of the World,” is a city of about 50,000 people near Indiana’s northern border with Michigan. Police problems are nothing new there. In the mid-1990s, a study by two policing experts commissioned by the city called out the department’s “reputation for brutality” and its failure to rein in officers who had “abused citizens, violated civil rights, [and] alienated segments of the community.” Many of the problems cited in that long-ago report can still be found today. 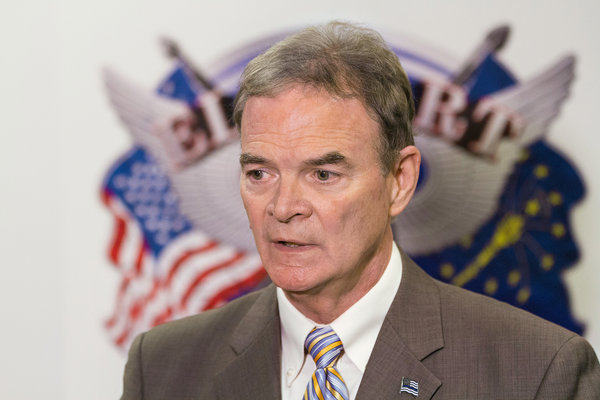 In early November, we obtained the video of the two Elkhart officers repeatedly punching a handcuffed man in the police station’s detention area. “If you spit again, we’re going to party,” one of the officers said just before the beating began. The police chief, Ed Windbigler, never mentioned the punches when he told the city’s civilian oversight commission that the two officers had gone “a little overboard” when taking the man to the ground.

The chief said he had opted to reprimand the officers, rather than impose more serious discipline, because of their clean records. But one of them had an extensive disciplinary history, with six suspensions and two reprimands in his first five years. Once, according to his personnel file, he arrested a woman for public nudity, then, after she was released from jail on bond, he sent her a friend request on Facebook and seven text messages, asking to “hang out.”

He isn’t alone. Of the department’s 34 supervisors, 28 have disciplinary records in their personnel files. One is the mayor's son, a sergeant once reprimanded for firing 13 times at a dog, with at least two bullets striking a house. Fifteen of the supervisors have been suspended, including the chief, assistant chief and patrol captain. Three were convicted of criminal charges during their careers.

There’s also another set of numbers that is striking. From 2013 to 2017, Elkhart police officers fatally shot six people. In those same years, the police in New York City — population, 8.6 million — fatally shot 43 people. The New York Police Department had about seven times the shootings in a city with more than 160 times the people. In Elkhart, one of the shootings led to a lawsuit and settlement. Another generated protests when it was discovered that neither of the officers who opened fire had a working body camera.

As Mayor Neese awaits word from the Justice Department, Chief Windbigler has been placed on unpaid leave for 30 days, putting the department in the hands of Todd Thayer, the assistant chief. His disciplinary record includes a five-day suspension, seven reprimands and a two-step demotion, for making flippant comments about a fatal shooting. He said an officer who opened fire could now check that off his “bucket list,” according to his personnel file.

The assistant chief has been unwelcoming of outside scrutiny. At a town hall meeting in November, he defended the police department while criticizing the news media. He said that when his department began receiving public records requests from one of us, the department’s reaction was: “Who is this guy? … What’s all this digging?”

The police, he said, went to the city’s legal department and asked: “Does anybody know what’s going on? Everything’s going good in Elkhart. Why are they coming over here, into our backyard, and trying to disrupt everything we built?”