LONDON — If generosity of spirit were everything, “White Teeth” would be a triumph. Zadie Smith’s 2000 novel remains one of the most notable debut works of fiction in recent times, and the stage adaptation at the Kiln Theater in London marches to the same compassionate drum as the book. (The production, which opened Tuesday, runs through Dec. 22.)

London’s is a theater culture that likes dramatized novels (let’s not forget a little show called “Les Miserables”), but Stephen Sharkey’s version of Ms. Smith’s capacious narrative frustrates as often as it enchants. You sense the spirit of multicultural celebration intended by Mr. Sharkey and the show’s director, Indhu Rubasingham, who is also the artistic director of the Kiln. We live in divided times, to which Ms. Smith’s portrait of a teeming, ceaselessly inclusive London can be seen as a corrective.

Yet not for the first time, a book full of incident and character suffers in the filleting necessary to bring it to the theater. Film may be a more sensible outlet for Ms. Smith’s vision of a London populated largely by outsiders who have managed miraculously to coalesce. In fact, a four-part TV version aired here in 2002.

Seen amid the broader London theatrical landscape, “White Teeth” furthers an interest in and insistence on racial diversity that extends to the Young Vic’s current production of “Twelfth Night,” which relocates Shakespeare’s comedy to the bubbling cultural melting pot that is the Notting Hill district of London in the annual run-up to its late-summer Carnival.

Both shows give a picture of racial harmony that isn’t always evident in other plays currently on view here. The new (and dispiriting) Martin McDonagh play, “A Very Very Very Dark Matter,” spins a yarn of appropriation and even enslavement, in which the Danish writer Hans Christian Andersen has an unexpected ghost writer: a one-legged Congolese “pygmy” (the American newcomer Johnetta Eula’Mae Ackles) whom he keeps in a cage in his attic. Arinzé Kene’s punchy “Misty,” at Trafalgar Studios, confronts head-on the difficulty of being a black artist in a white world. It will be followed at the Trafalgar by the commercial transfer of Natasha Gordon’s National Theater hit, “Nine Night,” whose portrait of cultural commingling better echoes the spirit of “White Teeth.” 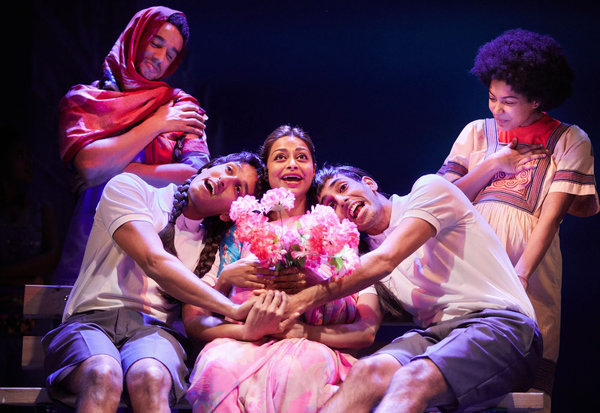 It’s difficult, however, to imagine “White Teeth” having much of a future life, at least not without serious reconsideration. While you can understand the creators’ shared desire to exult in the vocal polyphony that exists just beyond the Kiln’s front door (Ms. Smith’s novel is set in a nearby corner of the city), the result seems inchoate and piecemeal, and the inclusion of songs (13 in all, most of them undistinguished) does nothing but present a hurdle to further development of the script.

The focus of the novel has been altered, as has its sweep — inevitably, given that the book runs to 500-plus pages in paperback. Instead of starting with the suicidal, several-times-married Englishman Archie Jones (here played by a sad-eyed Richard Lumsden), the play kicks off with a knowing wink to the audience from our shrill-voiced guide for the evening: Mad Mary (Michele Austin), a lesser character in the novel whom Ms. Smith describes as a “black voodoo woman” and who is onstage to lead us through the familial truth-telling that drives the play.

In an impulsive gesture, Mary jabs her dentist, Rosie Jones (Amanda Wilkin), with a syringe, which in turn leads to a clunkily managed tumble backward through time. “Wait! Where are we now? What year?” Rosie asks at the start of the second act, to which one can only reply that if the characters can’t follow their own story, how are we supposed to?

Devotees of the novel will note the importance given to Rosie, a new character; it’s her mother, Irie (Ayesha Antoine), who figures heavily in the book. Rosie’s father could be one or the other of a pair of Anglo-Bengali twins — the bookish, fully Anglicized Millat Iqbal (Assad Zaman) or his radicalized brother, Magid (a notably intense Sid Sagar). And so we have a panorama that folds various ethnicities, religions and nationalities into a story here told in reverse, allowing Rosie to wake up to a fuller sense of herself by the time the play reaches what is clearly intended to be a life-enhancing finish.

It falls to the twins’ father, Samad (Tony Jayawardena), a Bangladeshi long based in London, to voice the thesis of the play when he attests to the ability of his adopted city to get under the skin of its inhabitants. Mad Mary expands on that sense of connection near the end when she name checks the neighborhood of the Kiln itself and speaks of “kissing the Kilburn air” — a lovely sentiment that spreads good cheer, even if the play itself lacks the breath of life.

There’s scant reason to applaud the landscape that gets laid bare in “Ear for Eye,” the latest Royal Court entry from the black British writer-director Debbie Tucker Green, who prefers a lowercase rendering of her name and the play’s title. (Her biting production runs through Nov. 24.)

A triptych lasting more than two hours with no intermission, the play casts an unsparingly bleak, clinical eye on race relations in Britain and the United States, and concludes with two brief films connecting the grievous state of affairs now with America’s Jim Crow legislation of old and the slave laws under which Jamaicans suffered during British rule.

Each third of the play has its own style and strategy: The middle section in effect rewrites David Mamet’s eternally contentious teacher/student smackdown, “Oleanna,” to apply here to an African-American female student (Lashana Lynch) and a white male professor who can’t regard the younger woman as anything but “a problem.” Demetri Goritsas in the role is the only white actor in the accomplished, entirely committed cast.

Possessed of a jagged rhythm in her writing that echoes Mr. Mamet’s, Ms. Green ends her play with the repetition of a sentence — “Give me one reason to not” — that remains purposefully unfinished. What the missing word might be is sure to haunt you all the way home.