Queen’s famous set at the behemoth charity concert Live Aid plays a central role in the Freddie Mercury biopic “Bohemian Rhapsody.” What made it so memorable on July 13, 1985, and does it still hold up? Here’s a breakdown of the music, the moves and that subversive studded armband.

How did Queen end up at Live Aid?

Bob Geldof had to convince Freddie Mercury to join the star-studded Live Aid lineup. “Fred, why wouldn’t you do it?,” he reportedly said. “The entire stage was built for you, practically. Darling, the world.”

Live Aid, which took place simultaneously at Wembley Stadium in London and John F. Kennedy Stadium in Philadelphia on July 13, 1985, was the most ambitious rock concert of its era. Geldof, the rocker behind Band Aid and the hit 1984 charity single “Do They Know It’s Christmas?,” wanted to raise more money for famine relief in Ethiopia. The result was a 16-hour concert featuring more than 50 sets from the biggest pop and rock acts of the era, including Madonna, David Bowie and U2.

Geldof approached Mercury through Spike Edney, a former member of Geldof’s own band, the Boomtown Rats, who had recently joined Queen to play keyboards during the group’s live shows. Queen was noncommittal, but not because, as the movie “Bohemian Rhapsody” suggests, they had split from Mercury for several years. The group was exhausted after a spring 1985 tour of New Zealand, Australia and Japan. And Mercury had recently cast doubt on the band’s future by releasing a solo album, “Mr. Bad Guy,” to a lukewarm reception.

Once Queen was convinced of the show's epic scale, they agreed not to close the concert, but to play at 6:41 p.m. And they took the show more seriously than many of their peers, rehearsing for three solid days.

By the time Queen hit the stage in London, the 70,000 fans at Wembley had already seen performances by Elvis Costello, Dire Straits and Phil Collins, who left immediately after his set with Sting to catch the Concorde to the United States, so he could drum with Eric Clapton and Led Zeppelin in Philadelphia. But they had been seeing Queen’s piano all day long; Mercury let the other acts use his Steinway. GAVIN EDWARDS

Why was Queen’s performance so revered?

The Live Aid concerts took place at a peak moment for idealism in rock, when top-selling musicians decided they should leverage their popularity for good works, like alleviating famine in Ethiopia. International satellite links drew a worldwide audience to Live Aid and generated tens of millions of dollars in donations. It was half a decade before the World Wide Web existed, and an eon before live-streamed concerts became ubiquitous. An estimated 1.5 billion viewers tuned in.

Queen reveled in the magnitude of the occasion. Bigness — grand pronouncements, operatic dynamics, Mercury’s soaring voice and Brian May’s titanic guitar buildups — was the cornerstone of Queen’s music. “We Are the Champions” and “We Will Rock You,” two signature Queen songs, are triumphalist anthems, built for giant stages and shouted singalongs. Queen’s drummer, Roger Taylor revealed in a 1999 Mojo magazine interview that Queen’s engineer had also tweaked the stadium’s sound-system settings so that, “We were louder than anyone else.” 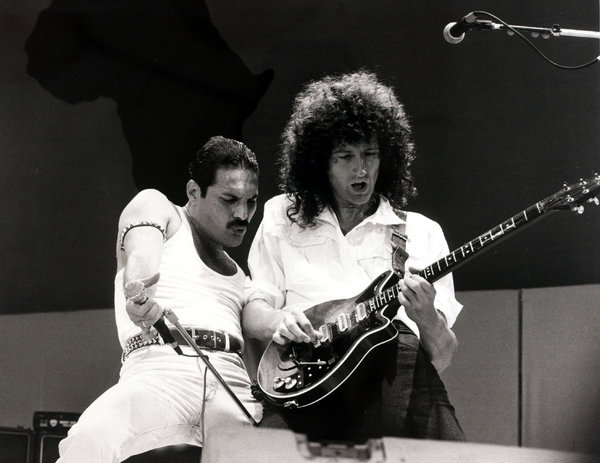 Running just over its allotted 20 minutes, Queen reached for all of its extremes: the melodramatic piano-ballad opening of “Bohemian Rhapsody,” the rockabilly swing (and tongue-in-cheek Elvis Presley impression) of “Crazy Little Thing Called Love,” the hard-rock chords of “Hammer to Fall,” the drum stomp of “We Will Rock You.”

Mercury held all those aspects together with a performance in which campy and commanding were inseparable. He opened and closed the set sitting at the piano; in between he strutted and preened, carrying his microphone on a metal pole that he treated as a vaudevillian’s cane, an air guitar and, of course, a phallus. He was a rock star playing a rock star, leather-lunged and imperious but also grinning to let everyone share the joke. And in Britain, where Queen had become a symbol of national pride, the Wembley crowd was his from the beginning, roaring back every call-and-response and doing a stadium-wide, hands-held-high double clap in “Radio Ga Ga.” For 21 minutes, Freddie Mercury undeniably made the world his stadium. JON PARELES

Mercury’s pinnacle bow at “Live Aid” was charged by a poignant sense of subversion. Here was a gay man stuck in a pop culture moment that continued to insist his identity remain shielded in code. But what glorious code he chose! Through his balletic gait and florid presentation, Mercury rubbed the nose of Live Aid’s global audience in a powerful brand of effeminacy, seducing them into adoring something they might otherwise view with contempt.

Here, too, was a man of Parsi descent, who had grown up in Zanzibar and India before moving to Britain in his late teens. Together, those roles made Mercury a double outsider, a two-fisted underdog fighting for his day. On this particular one, Mercury’s raw will and broad talents elevated him to a stage whose televised exposure gave him the chance to conquer the world. Yet, for Mercury — and for all those who appreciated the gigantic challenges in his life — his performance meant more. As the ultimate outsider, Mercury used his slam-dunk display to personify, and amplify, Live Aid’s broadest message: hope. JIM FARBER

The power of the matching armband

It was simple what he wore. Just some Wranglers, faded, high-wasted, tight. White Adidas, a white tank top, and a black, studded belt that probably required every buckle hole get cinched to be that snug. But the armband was complicated. The armband matched the belt, and in matching it — with his hair slicked back and that full mustache and the chest hair — Freddie Mercury took “simple” to “daring” to “gay.” The look was “gay leather daddy” but in what we’d now call dad jeans. Basically a conflation of hard-core and normcore.

Little Richard, Liberace, David Bowie, Elton John: Plenty of performers have done a lot with (and for!) flamboyance and drag and camp and winking. But Mercury’s clothes that day weren’t a wink. They weren’t a costume. They were his. He stood before the whole world and let them soak it all in. What was electrifying about him that day, whether he was sitting at that piano, belting an opening section of “Bohemian Rhapsody” or doing not terribly rhythmic aerobics around the stage with his mic stand was how Mercury owned these clothes — like, he possessed them and they seem to possess him. WESLEY MORRIS 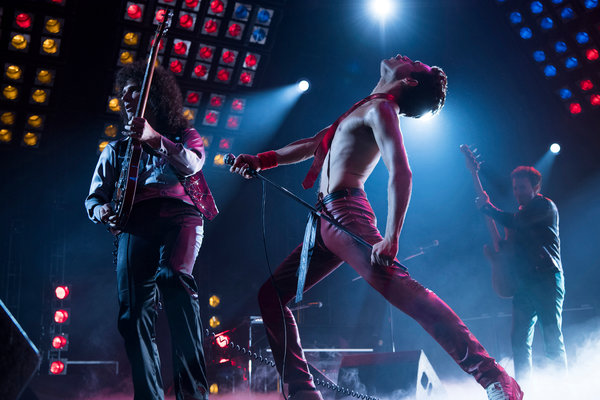 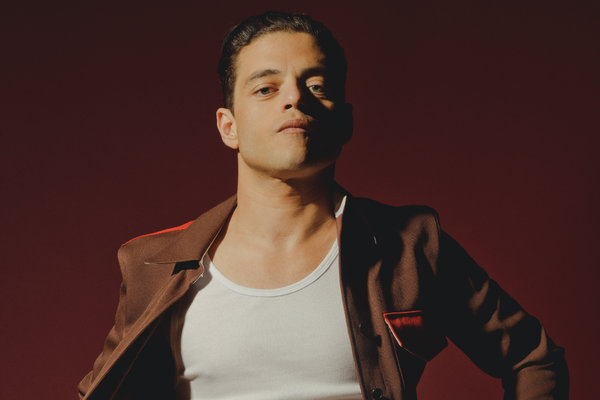 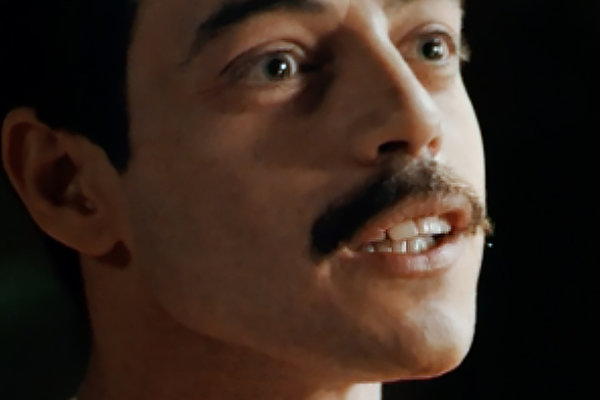