“Grey’s Anatomy” closes out Season 15, and snuggle up with a box of tissues to watch “Wonder.”

GREY’S ANATOMY 8 p.m. on ABC. The Season 15 finale is here and, in typical “Grey’s Anatomy” fashion, it’s oozing with drama. In this episode, Seattle is hit with a massive windstorm, creating a flood of patients in need of care at Grey Sloan. The storm also finds Alex (Justin Chambers) and Jo (Camilla Luddington) stuck in the shelter of their own home, but instead of succumbing to boredom, the two decide to have a second honeymoon of sorts. On the other end of the spectrum, Meredith (Ellen Pompeo) and Richard (James Pickens Jr.) have a confrontation as she implores him to get his act together.

OWN SPECIAL: OPRAH WINFREY PRESENTS: BECOMING MICHELLE OBAMA 8 p.m. on OWN. In front of a live audience, Oprah Winfrey sits down with Michelle Obama to discuss her memoir, “Becoming,” and the life experiences that have made her who she is. Ms. Obama delves into her upbringing and childhood, her time as a lawyer in Chicago and her drive to balance work with motherhood. She also openly talks through the challenges she and President Obama faced during the early years of their marriage and discusses their experiences with counseling, as well as talking through the pressures of being in the White House. 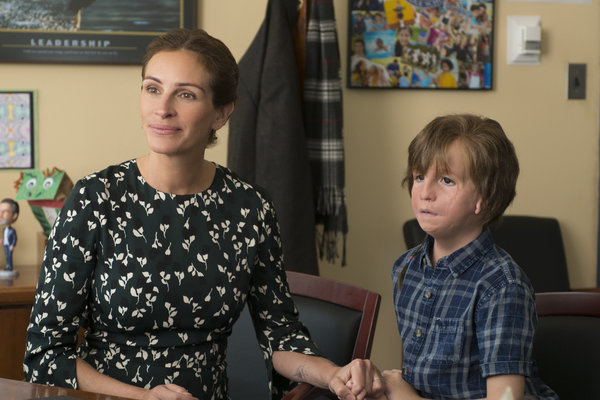 WONDER (2017) on Amazon and Hulu. Get the tissues ready. Based on R. J. Palacio’s best-selling novel, this New York Times Critic’s Pick focuses on 10-year-old Auggie Pullman (Jacob Tremblay) and his family as they navigate life in Manhattan. Auggie suffers from a cranial disorder, and after undergoing several corrective surgeries, he looks a bit different than other kids his age. But despite this, he wants his parents (Owen Wilson and Julia Roberts) to let him go to middle school after years of being home schooled. Little does Auggie know that learning how to navigate school also means learning to deal with the bullies that come with it. Seriously, don’t watch this unless you have a box of Kleenex within a five-foot radius.

ANCHORMAN: THE LEGEND OF RON BURGUNDY (2004) on Amazon, Google Play, HBO and Vudu. In this comedy, Ron Burgundy (Will Ferrell) is a hot shot San Diego anchorman whose reign is threatened by the up-and-coming reporter Veronica Corningstone (Christina Applegate), sending a shock through their male-dominated field of the 1970s. Ron quickly fixates on his feud with Veronica, leading to a mistake that costs him his career. But with the help of a panda, Ron attempts to resuscitate his professional life.