Desus Nice and the Kid Mero make their Showtime debut. And Spike Lee’s “School Daze” is on BET.

DESUS & MERO 11 p.m. on Showtime. How do you take a scrappy late-night series hosted by a couple of Bronx pop culture aficionados and size it up for premium cable? The answer, according to Desus Nice and the Kid Mero (the stage names of Daniel Baker and Joel Martinez), is gently. “You don’t mess up the recipe if it’s working,” Desus recently told The New York Times. The pair amassed a following through a free-flowing talk show on Viceland; before it ended last summer, it distinguished itself from other late-night shows through a lack of structure, with episodes that tended to feel like extended hangouts with Desus and Mero; there were no traditional opening monologues. The new show endeavors to take that same structure (or lack thereof) and use premium cable resources to bring in guests like Representative Alexandria Ocasio-Cortez, the pair’s first big interview on the new show (and a fellow Bronx native).

SCHOOL DAZE (1988) 5:40 p.m. on BET. A question that will hang heavily over the Academy Awards on Sunday is whether Spike Lee will win a directing Oscar after being nominated, for the first time, for “BlacKkKLansman,” his 21st nondocumentary feature. His second, the musical-comedy “School Daze,” came out between his classics “She’s Gotta Have It” and “Do the Right Thing.” It paints a scathing portrait of a fictitious all-black college whose population is divided between members of fraternities and sororities and everybody else. Laurence Fishburne plays a student political organizer; the ensemble also includes Lee and his frequent collaborator Giancarlo Esposito. 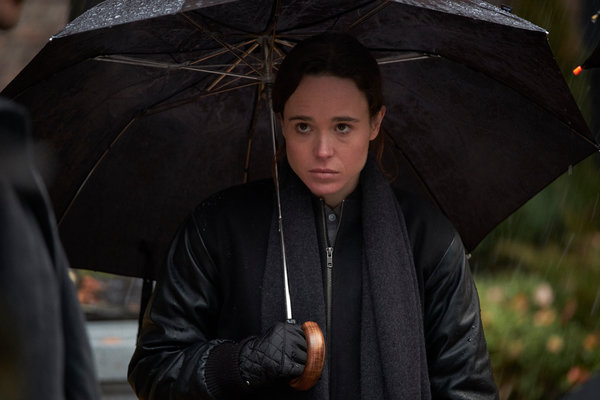 THE UMBRELLA ACADEMY Stream on Netflix. A comic book series created by the former “My Chemical Romance” singer Gerard Way provides the basis for this superhero chronicle, the latest of Netflix’s forays into the genre. Ellen Page and the “Game of Thrones” actor Tom Hopper lead the ensemble, playing estranged superhero siblings who are reunited — and are subsequently attacked by a group of assassins — after their adoptive father figure dies. Cue the start of a world-saving mission. (Mary J. Blige plays one of the baddies.) In a somewhat unenthusiastic review for The Times, Mike Hale called the series a “polished but increasingly dull version of the same old story: saving the world as a byproduct of overcoming adolescent resentments and family dysfunction.”

I, TONYA (2017) Stream on Hulu; rent on Amazon, Google Play, Vudu and YouTube. In the wide and storied world of sports transgressions, few scandals have captured America’s attention like the one in 1994 involving Nancy Kerrigan that ended the rising career of Tonya Harding. Craig Gillespie’s comedic drama revisits Harding’s rise and fall, with Margot Robbie in the lead role and Allison Janney as Harding’s mother — a role for which she won an Oscar.