Between network, cable and streaming, the modern television landscape is a vast one. Here are some of the shows, specials and movies coming to TV this week, Oct. 19-25. Details and times are subject to change.

THE VOICE 8 p.m. on NBC. Gwen Stefani returns to the show as a coach alongside Kelly Clarkson, John Legend and Blake Shelton for the 19th season. Hosted by Carson Daly, the new season kicks off with blind auditions, where the coaches begin to claim their team members.

THE THIRD DAY 9 p.m. on HBO. The season finale of HBO’s limited series, which follows a man named Sam (Jude Law) and a single mother named Helen (Naomie Harris), as they separately explore the mysterious island of Osea. The show’s six episodes are split into seasons: “Summer” follows Sam; “Autumn” spends a day at the island’s festival, “Esus and the Sea,” and this last episode of “Winter” wraps up the show as Helen searches for answers.

HALLOWEEN (1978) 6 p.m. on TCM. John Carpenter’s horror classic is about the murderous Michael Myers, who stalks a young babysitter named Laurie Strode (Jamie Lee Curtis) on Halloween. The movie, which was later spun into a full franchise, was retroactively reviewed by Jason Zinoman for The New York Times in 2018. “The precision and timing of the movie’s chilling chase scenes reveal an artist who understands that truly resonant scariness could not be dumb,” Zinoman wrote. “It required deft craft and a coherent perspective on fear. Horror common wisdom states that the scariest evil is unknown, inexplicable and random; once the monster is revealed in a movie and the mind makes sense of it, much of the fear it inspires dissipates.”

2020 WORLD SERIES TBD on Fox. The 116th World Series kicks off with Game 1. The best-of-seven series continues with Game 2 on Wednesday and Game 3 on Friday. Because of the pandemic, all games will take place at Globe Life Field in Arlington, Tex. 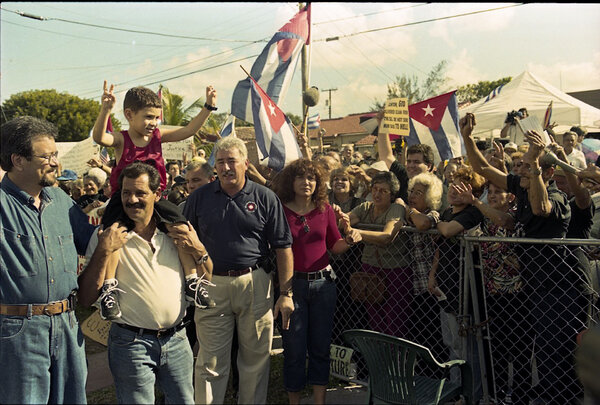 537 VOTES (2020) 9 p.m. on HBO. Billy Corben’s documentary explores the political mechanisms that govern the United States, focusing on how George W. Bush — whose victory depended on support from Florida — won the state in 2000 by just 537 votes. With interviews from insiders and political operatives, the film looks at how a custody battle over 6-year-old Elián González, a Cuban refugee, caused political chaos in Miami, which ultimately helped swing the crucial state.

BLACK-ISH 9:30 p.m. on ABC. After two election specials — which aired in early October — the seventh season of this award-winning show picks up where the Johnson family left off as Laurence Fishburne, Anthony Anderson and Tracee Ellis Ross return to the small screen. The Los Angeles-based family continues grappling with issues of race, police brutality and identity in America, focusing on topics like the coronavirus pandemic, voting and social justice.

FINAL PRESIDENTIAL DEBATE 9 p.m. on ABC, CBS, Fox and NBC. After the second presidential debate was canceled and replaced with two separate town halls, this second and final debate will take place at Belmont University in Nashville. The NBC News White House correspondent Kristen Welker is slated to moderate the debate, choosing six topics for President Trump and Joe Biden to discuss.

AMERICAN SELFIE: ONE NATION SHOOTS ITSELF (2020) 9 p.m. on Showtime. Alexandra Pelosi (the daughter of Nancy Pelosi) directs this documentary, which explores how Americans feel about the coronavirus pandemic, the nationwide protests against police violence and the country’s stark political divisions. “The purpose of this film was to take the temperature of how people feel about America today — to take a selfie of how America looks in 2020,” Pelosi said in a statement. “It’s an artifact of this moment in time.”

HOW TO WITH JOHN WILSON 11 p.m. on HBO. This six-episode comedy premieres on HBO with John Wilson hosting from behind the camera. “It’s kind of like that show ‘Planet Earth,’” Wilson explains in the show’s trailer, “but if it was only in New York and David Attenborough was forced to film everything himself.”

CITIZEN KANE (1941) 5:45 p.m. on TCM. Orson Welles’s Oscar-winning feature is considered by many critics to be the greatest film ever made. “It can be safely stated that suppression of this film would have been a crime,” Bosley Crowther wrote in his review for The Times. “For, in spite of some disconcerting lapses and strange ambiguities in the creation of the principal character, ‘Citizen Kane’ is far and away the most surprising and cinematically exciting motion picture to be seen here in many a moon. As a matter of fact, it comes close to being the most sensational film ever made in Hollywood.”

CARRIE (2013) 7:45 on AMC. Julianne Moore and Chloë Grace Moretz star in this remake of Brian De Palma’s 1976 film. “Blood runs through ‘Carrie,’ first as a symbolically suggestive trickle — initially as an unholy brew of menstruation and the blood of Christ — and then in great, gushing waves as the body count mounts,” Manohla Dargis wrote in her review for The Times.

FLESH AND BLOOD 9 p.m. on PBS. This mystery-thriller mini-series stars Imelda Staunton as a widow with grown children and a new flame, and Francesca Annis as her nosy neighbor. The season finale brings an end to the messiness, intergenerational drama and figurative tea-spilling as the cast tries to piece together motivations behind a possible murder.

THE UNDOING 9 p.m. on HBO. Nicole Kidman stars in this new mini-series as Grace Fraser, a successful therapist who’s about to publish her first book. But after a mother from her child’s elite private school is found dead, Fraser’s husband, Jonathan (Hugh Grant), goes missing and her life begins to fall apart.