Between network, cable and streaming, the modern television landscape is a vast one. Here are some of the shows, specials and movies coming to TV this week, Nov. 16-22. Details and times are subject to change.

ALL RISE 9 p.m. on CBS. Judge Lola Carmichael, played by Simone Missick, is back for a new season of this legal drama. The two-part premiere centers on a protest, at which Lola tries to defend a teenage girl, resulting in an escalating encounter with the police.

HIS DARK MATERIALS 9 p.m. on HBO. This fantasy series, based on Philip Pullman’s trilogy, embarks on a second season, picking up after Lyra (Dafne Keen) follows Lord Asriel (James McAvoy) through a bridge to a new world. The second season will feature return performances by Ruth Wilson, Andrew Scott and Lin-Manuel Miranda, as well as conspiring witches, steampunk-style hot-air balloons and a special knife that can slice between worlds.

BIG SKY 10 p.m. on ABC. This new drama, from the “Big Little Lies” creator David E. Kelley, chronicles the events following the disappearance of two sisters, Danielle and Grace Sullivan (Natalie Alyn Lind and Jade Pettyjohn), who are kidnapped by a truck driver in rural Montana. In an effort to locate the teenagers, the private detectives Cody Hoyt (Ryan Phillippe) and Cassie Dewell (Kylie Bunbury) team up with Cody’s estranged wife, the former cop Jenny Hoyt (Katheryn Winnick). But soon they discover that the Sullivans are not the only girls who have gone missing in the area.

FORGED IN FIRE 9 p.m. on History. The season premiere of this reality competition series finds four new talented bladesmiths recreating some of history’s most iconic weapons for a chance to win a $10,000 prize. Season 8 has a new host, Grady Powell, a former Green Beret. And David Baker, Doug Marcaida, J. Neilson and Ben Abbott return as judges.

CRAZY, NOT INSANE (2020) 9 p.m. on HBO. Fans of Netflix’s “Mindhunter” or the podcast “My Favorite Murder” will not want to miss this documentary, chronicling the life and work of Dr. Dorothy Otnow Lewis, a psychiatrist who has dedicated her life to understanding why human beings kill. The film, directed by Alex Gibney, includes taped interviews between Lewis and the infamous killers Arthur Shawcross and Ted Bundy, in which she examines their formative experiences and neurological dysfunction, proposing that killers are made, not born. 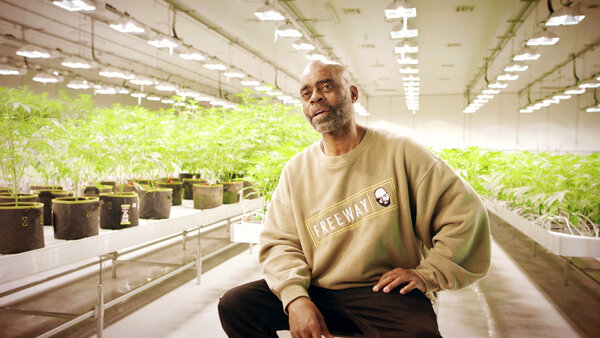 SMOKE: MARIJUANA + BLACK AMERICA (2020) 10 p.m. on BET. While the winner of the presidential race took days to determine, one clear winner of the 2020 election was marijuana, which became legal for recreational use in four more states, bringing the nationwide total to 15. But how will these new legalization and decriminalization measures impact communities that have been disproportionately affected by marijuana-related arrests and convictions? This documentary, narrated by the rapper Nas, explores the drug’s social, economic and legal impact on the Black community, and shares stories of Black entrepreneurs across the country who are fighting for a piece of the legal cannabis industry.

SUPERNATURAL 9 p.m. on the CW. After 15 seasons, this sci-fi series, which follows the demon-hunting Winchester brothers (Jared Padalecki and Jensen Ackles), will come to an end. At 8 p.m., ahead of the series finale, catch SUPERNATURAL: THE LONG ROAD HOME, an hourlong special looking back at the show’s epic run.

A MILLION LITTLE THINGS 10 p.m. on ABC. The group of friends at the center of this drama navigate depression, cancer, chemical dependency, domestic violence, family and love. This season, they will have to face another challenge: the emergence of Covid-19. The season picks up in the aftermath of Eddie’s (David Giuntoli) car accident.

A TASTE OF CHRISTMAS 8 p.m. on Lifetime. Lifetime’s holiday programming continues with this film about Natalie (Anni Krueger), a young woman who tries to help her cousin (Nia Vardalos) open a new Italian restaurant by Christmas. But first Natalie has to get the chef (Gilles Marini) onboard, with just three days to pull the opening off.

MAN ON A TIGHTROPE (1953) 8 p.m. on TCM. This classic film, directed by Elia Kazan, follows a Czech circus owner who, after being harassed by the Communist government, attempts to take his troupe out from behind the Iron Curtain and into Bavaria. In a New York Times review, the film was described as “not only an arresting melodrama but a vivid commentary on a restricted way of life in our parlous times.”

BETWEEN THE WORLD AND ME 8 p.m. on HBO. In 2015, the author Ta-Nehisi Coates published “Between the World and Me,” a nonfiction book formatted as a letter to his teenage son, recounting his experiences growing up Black in Baltimore and exploring the issue of white supremacy in America. This special, reimagined for the screen, weaves together readings from that book — as well as documentary footage, animation and elements of its 2018 Apollo Theater stage adaptation — to give the narrative new life against the backdrop of this year’s pandemic and protests for racial justice. The special will feature appearances by Coates, Mahershala Ali, Angela Bassett, Oprah Winfrey and others.

THE AMERICAN MUSIC AWARDS 8 p.m. on ABC. Taraji P. Henson will host the 2020 American Music awards in Los Angeles, honoring artists of all genres based on their streaming numbers, album and digital song sales, radio airplay and social media activity. This year, the Weeknd and Roddy Ricch each received eight nominations, while Megan Thee Stallion is up for five awards. The three-hour special will feature performances by Bad Bunny, Shawn Mendes, BTS and Dua Lipa.

BELUSHI (2020) 9 p.m. on Showtime. This R.J. Cutler documentary features audiotapes, diary entries and words from John Belushi’s collaborators, family and friends to revisit the life of one of America’s most popular comedians, who died in 1982 at the age of 33. The documentary draws largely on an audio archive made by Belushi’s wife, Judy, as well as interviews with Dan Aykroyd, Penny Marshall, Lorne Michaels, Carrie Fisher, Chevy Chase and others.