The 61st annual Grammy Awards are on CBS at 8 p.m., and Hasan Minhaj’s comedy show returns to Netflix.

THE GRAMMYS 8 p.m. on CBS. This awards show, billed as music’s biggest night and hosted by Alicia Keys, celebrates its 61st ceremony. The Recording Academy made a series of changes in its membership and nominations process in an effort to address concerns about a lack of diversity. J Balvin, nominated for record of the year with Cardi B’s “I Like It,” will join the rapper Young Thug, the singer Camila Cabello, the trumpet legend Arturo Sandoval and Ricky Martin to open the show. From there, Diana Ross and Dolly Parton will perform, sharing the stage with Post Malone, Cardi B, Janelle Monáe, Lady Gaga and Kacey Musgraves, among others. Fantasia, Andra Day and Yolanda Adams are to perform a tribute to Aretha Franklin, who died last summer at 76. In the lead-up to the event, the reporter Ben Sisario of The New York Times wrote, “as the show tries to stay culturally relevant, while also balancing the demands of race and gender representation, it may be impossible to please everybody at once.” Catch all the red carpet action on E! starting at 6 and on CBS at 7.

THE BAFTA FILM AWARDS 9 p.m. on BBC America. The other big award show of the night is essentially the British equivalent of the Oscars, where Yorgos Lanthimos’s “The Favourite,” starring Olivia Colman, Emma Stone and Rachel Weisz, is up for a whopping 12 awards, including best film. According to the reporter Alex Marshall of The Times, “the Baftas are often considered a rough bellwether for the Academy Awards,” which air Feb. 24, because of the overlap between members of both voting committees. 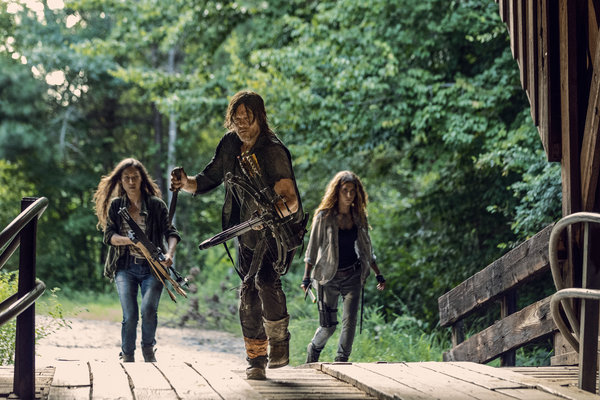 THE WALKING DEAD 9 p.m. on AMC. For the midseason return of this zombie apocalypse saga, the survivors encounter a new foe, the Whisperers, who disguise themselves with the skin of the undead to move around unnoticed. The show was just renewed for a 10th season.

PATRIOT ACT WITH HASAN MINHAJ on Netflix. The first season of this comedian’s weekly Netflix show returns from its winter hiatus with new episodes about sneaker experts, affirmative action and the SAT. Last month, Netflix blocked an episode of Minhaj’s show from streaming in Saudi Arabia after the government there complained it was critical of the crown prince. In a trailer introducing the new episodes, Minhaj poked fun at the controversy, telling viewers his show would be streamed globally, unless he angers “another crown prince.”

2 DOPE QUEENS on HBO streaming platforms. Jessica Jones is another charismatic “Daily Show” alum with a television series, inspired by her podcast with Phoebe Robinson. In the premiere of its second set of hourlong specials, which aired on Friday, the hosts talk fashion with the actress Lupita Nyong’o and challenge her to a braiding competition.