A limited series about N.B.A. athletes has its premiere on Showtime. And Jonah Hill hosts “Saturday Night Live.”

SHUT UP & DRIBBLE 9 p.m. on Showtime. When LeBron James and Kevin Durant discussed the Trump administration in an ESPN interview earlier this year, the Fox News host Laura Ingraham wasn’t happy. During a segment, she said the basketball players should stay out of politics and “shut up and dribble.” James then borrowed those words to drive his point home as an executive producer of this new three-part documentary series. Narrated by the sports journalist Jemele Hill, the show chronicles the evolving role of N.B.A. athletes and suggests that they can expand their brand beyond basketball, even if it becomes a point of contention.

THE PERFECT MOTHER (2018) 8 p.m. on Lifetime. As Stella (Sunny Mabrey), a vlogger on maternal bonding, grapples with her rejection by Shay (Lili Sepe), her spunky daughter, she becomes the target of Peyton (Audrey Whitby), a threatening young fan who’s looking for a loving mother of her own. 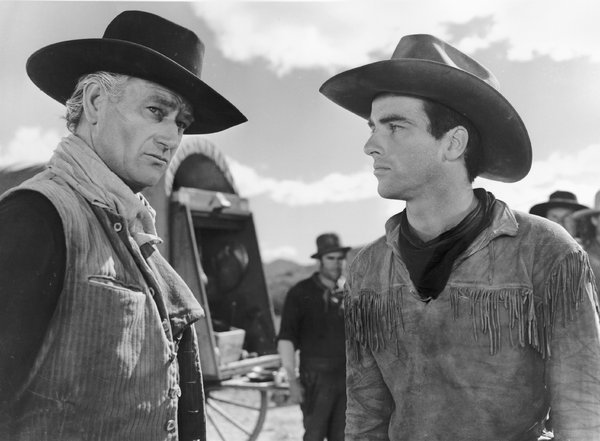 RED RIVER (1948) 8 p.m. on TCM; also on iTunes, Amazon, Google Play, Vudu and YouTube. John Wayne and Montgomery Clift play a father and adopted son who butt heads during a cattle drive along the Chisholm Trail toward Kansas. Adapted from a story that first appeared in The Saturday Evening Post, this epic western builds to a tense showdown between the two stubborn cowboys, one a coldblooded veteran, the other a courageous youngster. In his review for The New York Times, Bosley Crowther wrote that the film “rings with the clang of honest metal and throbs with the pulse of real life.”

GERALDO RIVERA’S MURDER IN THE FAMILY 9 p.m. on Reelz. Geraldo Rivera hosts this new crime series about murders and tragedies that befell celebrities like Dylan McDermott, Kelsey Grammer and Donatella Versace. This premiere revisits the murders of Jennifer Hudson’s mother, brother and nephew in 2008.

SATURDAY NIGHT LIVE 11:30 p.m. on NBC. Jonah Hill returns as host (unless he needs Robot Jonah to cover for him) and the singer Maggie Rogers performs. Hill recently made his directorial debut with the coming-of-age skater film “Mid90s.” He also starred alongside Emma Stone in the trippy Netflix mini-series “Maniac.”

SOUFRA (2017) on Hulu. On the surface, a woman starting a local business may not sound like much of a story. But when the woman in question is a Palestinian refugee in Lebanon — where refugees are systemically barred from working legally — there’s much to explore. This documentary by Thomas Morgan follows Mariam Shaar, who lives in a refugee camp south of Beirut, as she breaks barrier after barrier to gather other women like her and start a catering company called “Soufra.” The company eventually grows into a food-truck business, but Shaar faces her fair share of roadblocks to make that happen. Andy Webster named the film a Critic’s Pick in his review for The Times and called it a “stirring tale of empowerment.”