John Leguizamo’s one-man Broadway show comes to Netflix. And Samantha Bee hosts a special episode of “Full Frontal” ahead of the midterm elections.

JOHN LEGUIZAMO’S LATIN HISTORY FOR MORONS (2018) on Netflix. Framed as a confidence-building lesson for his bullied son, John Leguizamo hilariously tries to recount 3,000 years of Latin history in 95 minutes in this one-man Broadway show — covering achievements from the ancient Mayan civilization to “the age of Pitbull.” Leguizamo’s physical comedy and flamboyant characters offer plenty of laughs, but The New York Times’s Jesse Green wrote, the injustices he outlines seem oddly downgraded for comedy: “‘Latin History for Morons’ would be richer if he didn’t try so hard to make something so awful so funny.”

THE SIMPLEST HEIST on Acorn TV. If you’re a fan of the NBC comedy “Good Girls,” try this Swedish mini-series. Loosely based on a book by Tomas Arvidsson, it follows a madcap scheme by a teacher Jenny (Lotta Tejle) and a doctor Cecilia (Sissela Kyle), two friends in their 60s who decide to rob a bank as they inch closer to retirement. At just six episodes, the show is ripe for binge-watching.

PYAASA (1957) on Amazon, Mubi and YouTube. A destitute poet (Guru Dutt) struggles to get his work published and finds a supportive voice in a prostitute (Waheeda Rehman) who falls for him and his words. 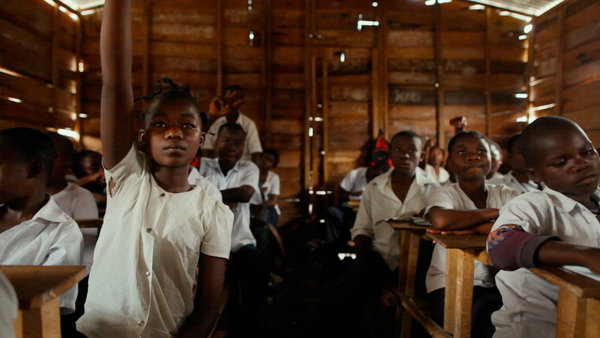 THIS IS CONGO (2018) 9 p.m. on Starz. The documentarian Daniel McCabe attempts to paint a comprehensive picture of the violence that has repeatedly plagued the Democratic Republic of Congo since its independence from Belgium in 1960. He zeros in on four people — a whistle-blower, a military commander, a mineral dealer and a tailor — who share how the country’s seemingly endless conflict has affected their lives. “There is much to admire here,” Ben Kenigsberg wrote in The Times, “but the sheer scope of the subject matter might be even better served by the capaciousness of a mini-series.”

MAMA MEDIUM 9 p.m. on TLC. Jennie Marie, a psychic and host of this new series, uses her abilities to read the energy of a man who hasn’t been able to speak in eight years and a woman whose mother committed suicide. A new episode of LONG ISLAND MEDIUM leads in at 8.

INDEPENDENT LENS: DAWNLAND (2018) 10 p.m. on PBS (check local listings). PBS celebrates Native American heritage this month with programming that includes this sobering look at the United States’ forceful separation of children from their families in the 20th century. The documentary highlights a government-endorsed truth and reconciliation commission in Maine set up to investigate the effects of the state’s child welfare practices on Native American families.

FULL FRONTAL WITH SAMANTHA BEE 10:30 p.m. on TBS. The late-night host Samantha Bee has been looking forward to the midterm elections so much that she planned this bonus episode to “yell at you to vote,” and will be back on Wednesday to “yell at you for not voting.”