‘War and Peace in Liberia’

The second civil war in Liberia, from 1999 to 2003, turned Africa’s oldest independent nation into a charnel house — where drugged child soldiers killed and raped members of their own communities, and where both rebel and government forces fired on unarmed civilians. Our visual memories of this appalling conflict come largely from two war photographers, Tim Hetherington of Britain and Chris Hondros of the United States, who were on either side of the front lines in 2003. Dozens of their photographs — which helped provoke international pressure to end the conflict — are on view at the Bronx Documentary Center.

Hetherington, who was embedded with the rebels, shot stately photographs in square format. One young soldier sits before an amaranth wall, ring-clad fingers resting on his hair; by his elbow is a grenade, perched as naturally as an apple on a teacher’s desk. Though he photographed soldiers, civilians and peacekeepers, Hetherington pictured the war’s effects more indirectly — through a blasted bathroom wall or the crumbling facade of the Bank of Liberia.

Hondros, whose prints are rectangular, favored longer sightlines and sharper diagonals. On a bridge outside the capital Monrovia, he captured a soldier, topless, his rocket launcher slung behind him as he jumps for joy. A child wearing a necktie and tank top, seemingly no older than 10, struggles to support the weight of his rifle.

In 2011, while documenting Libya’s revolution, Hetherington and Hondros were killed during a mortar attack by soldiers loyal to Col. Muammar el-Qaddafi. Hetherington was 40, Hondros was 41. This intense show is a memorial for men who believed, and perhaps proved in Liberia, that a few precise images could influence the international community. Yet it also feels like a eulogy for the last moment before digital circulation narrowed the impact of even the most urgent imagery — and before Syria’s civil war, among the most photographed and filmed conflicts in human history, disabused us of the pretension that images will make us act. JASON FARAGO 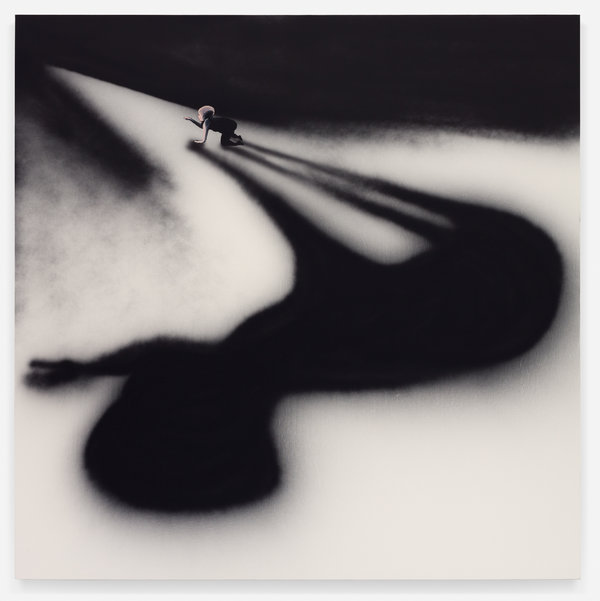 The Iranian-American painter Tala Madani has a knack for satire. Some of it will sound a little broad: The compilation of short animations that anchors her show “Corner Projections” at 303 Gallery features a giant disembodied penis, pink and translucent as a jellyfish, that beats a crowd to death, and a troupe of naked men roaming an alley on all fours to a soundtrack of mewling cats. But she isn’t using provocative imagery to score easy points. She’s using it to cut deeply into complex subjects like masculinity, power and desire.

A suite of dark, nearly black and white canvases, in which a crawling baby casts an outsize shadow and men in dark theaters use binocular-like devices to project their own fantasies, expertly balance subject matter against form. In them, Ms. Madani reflects on the way we look at the world and one another.

The piece I’m still thinking about is a seven-minute segment of the compilation reel called “Mr. Time.” The opening shot, of a swarthy man riding endlessly up and down a shopping mall escalator bank, exemplifies the artist’s instinct for evocative but nonspecific metaphor: He’s a neurotic, he’s a computer program, he embodies animal persistence. He’s minding his own business, in short, until a gang of baldheaded white men appears and throws him down the escalator. Their glee turns to dismay as he’s ever more injured — but they don’t stop throwing, and he doesn’t stop reascending, even after he’s been ripped into bloody pieces.

It’s not hard to think of political situations or international catastrophes the piece could be about, but its genius is that it applies so aptly to so many. WILL HEINRICH

If you’re a neurotic Jewish New Yorker like I am, you might have what could be described as an unhealthy attachment to the work of Roz Chast. The cartoonist has an uncanny gift for dramatizing mundane realities and the absurd anxieties that accompany them. In one comic in her recent book, “Going Into Town,” a woman reminiscent of Ms. Chast stands on a beach looking at a beautiful sunset; her thought bubble reads, “Someday, I should see Schindler’s List.” It’s this kind of self-deprecating humor that places her, alongside Jerry Seinfeld and the problematic Woody Allen, in a very specific canon.

That drawing is on view at SVA Chelsea Gallery, alongside many of her other works: cartoons for The New Yorker, pages from her books, family photos and other artistic endeavors, including Ukrainian-style decorated eggs. The exhibition feels like her creative nerve center.

Fans may have seen much of this before, but there are rarities, like a 1972 rendering of a nude woman whose body is partly filled with other people. That piece from Ms. Chast’s art school days, which represents a surprising surrealist streak early on, seems to foreshadow a 2008 New Yorker cover depicting Manhattan as a bewildered man and the subways as his veins.

If the 1978 comic “Life-A-Rama,” which climaxes with a ringing phone, is any indication, Ms. Chast found her voice quickly. She has spent the decades since refining it, assessing the world around her with equal parts inquisitiveness and apprehension — two qualities that are inextricably linked. Ms. Chast excels at paying attention, and that is her blessing as well as her curse. JILLIAN STEINHAUER

What’s wonderful about drawing, more than any other medium, is the immediacy with which it transmits one person’s sensual experience to another. To look at Eugène Delacroix’s sketches of horses, for example, is to see this 19th-century French painter’s fingers moving in some ever-living time out of time.

In her video and drawing show “Thunderbird,” the contemporary French artist Christine Rebet taps this eerie timelessness, and the mysterious transition of ideas into material being more generally, as her subject as well as a resource.

In a short animated video, the divine title creature commands one Gudea of Lagash to build him a temple; and in the ink and acrylic drawing “The Ritual of the First Brick,” four hands mark out that hypothetical temple’s first corners. Small inconsistencies in the video, like a red sun turning momentarily yellow, remind you that you’re watching a sequence of static images, but the motion, for all that it’s only happening in the mind, feels real.

Another drawing, “Procession to the Lady of Heaven,” details one fragment of an ornate vase. Male figures carrying baskets of red fruit and docile sacrificial goats march back and forth across the shard. The way Ms. Rebet abbreviates the men, especially, is lovely, like an elegant hieratic calligraphy. But the detail that struck me most forcefully was the brightness of the red ink: Every time I visited the gallery, over a matter of weeks, it looked as if the artist had painted it on only moments before. WILL HEINRICH

Entering a room filled with Thomas Lanigan-Schmidt’s art is a dazzling experience. In an art world shaped by a modernist tradition that has long downgraded the value of beauty, it’s rare to see work that delights in visual opulence. It feels like a revelation.

Mr. Lanigan-Schmidt grew up Roman Catholic and gay in New Jersey, before escaping to New York City, where he found a creative queer community at the Stonewall Inn. He was there in 1969 on the night of the police raid that set off the riots. His moving written account, “Mother Stonewall and the Golden Rats” (1989), is projected on a wall in the exhibition “Tenemental (With Sighs Too Deep for Words),” and available as a flier. Read it. Mr. Lanigan-Schmidt is as adept with words as he is with the bevy of other materials that are his mainstays — glitter, cellophane, foil and Magic Marker, among them.

In this artist’s practice, such commonplace stuff is fodder for radical transformation. He fashions it beyond recognition, building it up into elaborate icons, altars, and ritual objects reminiscent of the church of his youth. The installation “Mysterium Tremendum” (late 1980s) tells of a gay altar boy from New Jersey, who is beaten up by bullies, nearly kills himself, then finds redemption through his love of art. The story is narrated in handwritten text and paintings on 125 aluminum pans, with a soundtrack of chants and bells.

“Mysterium Tremendum” is somewhat simple given Mr. Lanigan-Schmidt’s maximalist aesthetic, but its storybook quality and emotional honesty lend it the air of a creation myth. It points to the genuine nature of his faith in both religion and art, and demonstrates how he has combined the two to practice his singular form of intimate devotion. JILLIAN STEINHAUER 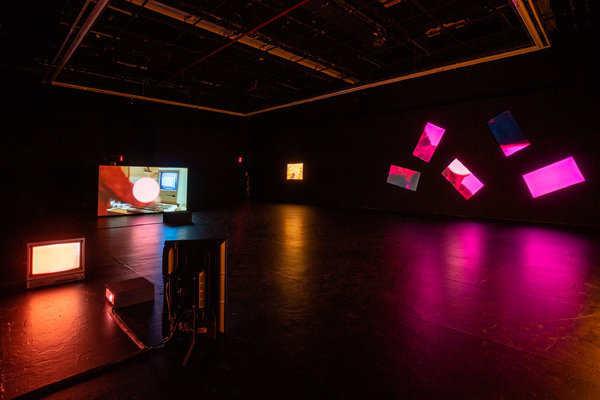 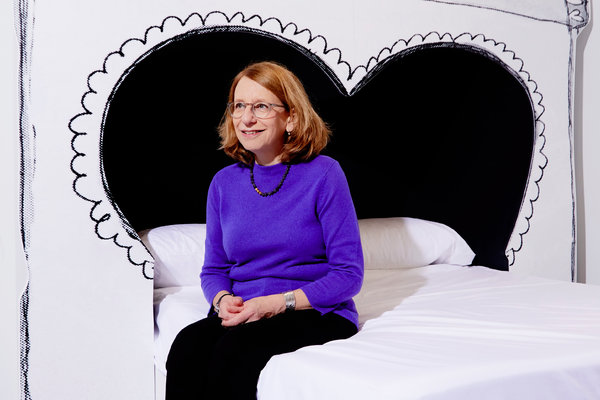 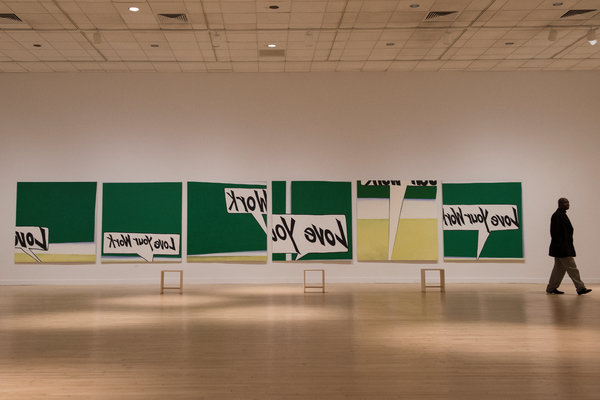