When the doors open in April at the renovated Webster Hall — the East Village club, once known as the Ritz, that was renowned for its mix of rock shows and raucous dance parties — music fans will find a revamped entryway and lounge, new bathrooms and upgraded acoustics.

But the most important change may simply be the arrival of an elevator.

Webster Hall, housed in an 1886 building, part of which has been declared a landmark, is a rabbit warren of staircases and anterooms that surround a grand ballroom. But without an elevator, handicapped patrons had to be carried inside and loading equipment was a daily ordeal.

“On a regular tour, whatever city they were in, they’d have two or four loaders,” said Jim Glancy of the concert promotion company the Bowery Presents, which is one of the new owners. “At Webster Hall, the minimum would be 12 people.”

The new elevator is one of a number of subtle changes meant to bring the club, just off Union Square, up to contemporary standards, reintroducing it to fans and to an industry that has been hungry for a room of its size — the ballroom holds 1,400 people — in a central part of Manhattan. “This room has been needed — we felt its absence,” said Marty Diamond of Paradigm Talent Agency, who booked the club in its 1980s iteration as the Ritz.

After an opening night in late April, to be announced, the initial lineup will include Patti Smith on May 1; the D.J. TroyBoi on May 3; Sharon Van Etten on May 4; Broken Social Scene on May 16 and 17; and MGMT from May 22 to 24.

Webster Hall, long an independently owned space, was bought two years ago by BSE Global, the parent company of Barclays Center, and the Bowery Presents, which is partly owned by the concert giant AEG, for a price estimated at about $35 million.

When the club shut down in August 2017 for renovations, there was an outcry from fans who worried that Webster Hall’s history as a dance mecca and a center of gay night life in New York would be lost. The new owners say they are committed to preserving that tradition, but are still deciding how.

“It was a very democratic club that was all about variety, and we intend to bring that variety back when we reopen,” said Keith Sheldon, BSE Global’s executive vice president of programming. 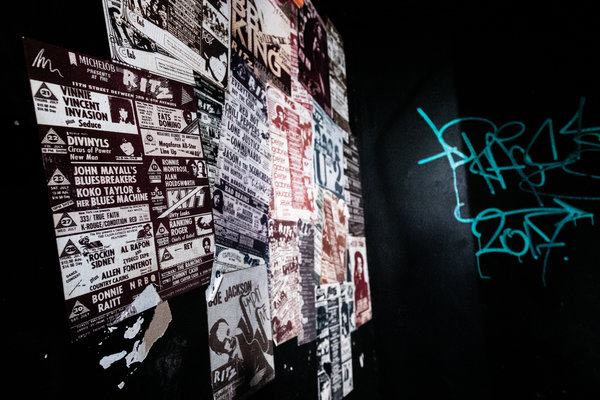 On a recent tour of the space, construction was still in full swing, with saws buzzing and workmen lugging armloads of wood. But the changes to the club’s design were clear.

Three doors were added to its entrance on East 11th Street — a concession by the Landmarks Preservation Commission — to get people in and out more quickly. On the first floor, the Marlin Room, a former venue-within-a-venue, has been turned into a sleek lounge.

Upstairs in the ballroom, acoustic treatments have been added to the walls and ceiling, and some remnants of the dance-party past have been removed, like a monstrous lighting rig that John Moore, one of the Bowery Presents principals, likened to Battlestar Galactica.

“It would come down, it would move around; it was very ’80s,” Mr. Moore said, adding that it would be replaced with a more conventional mirror ball.

But much of the idiosyncratic grandeur of the room was untouched, like its scalloped balconies, Art Deco wall designs and, above the stage, an old canvas painting of falling balloons. “The vision has always been to maintain the soul, the grit, the history of the venue,” said Brett Yormark, the chief executive of BSE Global. “For fans, they are going to feel like they’re coming home again.”

The preserved details are reminders of the remarkable history of Webster Hall, which started as a community social club but, by Prohibition, became known for wild parties. In 1953, it was bought by RCA, which used it as a recording studio for Harry Belafonte, Perry Como and classical giants like Sviatoslav Richter.

When the Ritz opened in 1980, it became a center for new wave music, hosting the American debuts of bands like U2 and Depeche Mode. In 1989, the Ritz moved to the former Studio 54 space on West 54th Street, and in 1992, under the new ownership of the Ballinger family, Webster Hall reopened as a club under its own name.

When the new partners bought the club, Jay Marciano, the chairman of AEG Presents, the company’s music division, said he expected renovations to cost $10 million. In an interview this week, he laughed at that estimate.

“I won’t give a specific number, but it was a multiple of that,” Mr. Marciano said. “Nothing gets done cheaply in New York City.”