Over the past year, the royal family rumor mill has largely focused on Prince Harry and Meghan Markle. In recent weeks, though — perhaps because Harry and Meghan’s headlines have shifted to baby watch — speculation over Prince William and Kate Middleton seems to have peaked. And while the gossip dominating news right now is William’s alleged affair with Rose Hanbury, it isn’t the first relationship scandal for William and Kate. The pair, who just celebrated their eighth wedding anniversary, has weathered a few relationship-related media storms in the past.

While there have been minor (and quickly dismissed as untrue) infidelity rumors over the years, the biggest scandal of William and Kate’s relationship was their 2007 split. With the world looking on and expecting a royal engagement at any minute, the couple broke up — baffling basically everyone. Not surprisingly, tabloids pondered possible explanations for the split, and many of those alleged explanations included one or both parties being in another relationship. But in reality, according to E! News, William broke things off for a rather common reason: cold feet. Of course, it’s worth noting that things seemed to heat back up when Kate came to a costume party at Wills’ barracks in June dressed as a naughty nurse.

Later, in an engagement interview with Sky News, Kate confessed that the time apart was probably for the best. “I think I at the time wasn’t very happy about it, but actually it made me a stronger person…You find out things about yourself that maybe you hadn’t realized,” she said. “Or I think you can get quite consumed by a relationship when you’re younger. I really valued that time for me as well although I didn’t think it at the time, looking back on it.” 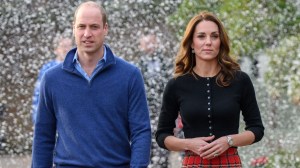 Fast forward to the present. Today, Will and Kate have three beautiful children and, by most account, seem to have a lovely life together. Still, anyone who has been in a relationship for more than five minutes will tell you that all relationships have their ebbs and flows. There is no such thing as a perfect partnership because people are imperfect. So, it’s not surprising that in the nearly two decades that they’ve been together, they may have had a few rough patches. Even more pointedly, the recent round of rumors involving Hanbury are entirely speculative and unconfirmed.

So, spoiler alert, Will and Kate are still standing. And more likely than not, there will be more quote-unquote scandals in their future — such is the nature of being a celebrity and having everyone analyze your every move. Here’s hoping they don’t let the constant scrutiny cause undue tension in what is by all accounts a lovely marriage.