LONDON — A woman slides slowly down a slatted foam mountain and out of her long chiffon dress, emerging naked, perhaps new born, at the bottom. Another woman sprouts multiple legs that dance gaily as she smiles beatifically. Long metal tubes are threaded through a man’s sleeves; bells are hung from another’s genitals; arrows are pierced through bodies.

Yes, we’re in Pina Bausch Land. Or rather, a land haunted by Pina Bausch. Dimitris Papaioannou’s “Since she” is the first new full-length work to be made for Bausch’s company, Tanztheater Wuppertal, since her death in 2009.

For almost a decade it seemed impossible to imagine who could succeed her in creating work for the highly individual performers who populated her fantastical, epic pieces. In May, “Since she” was the first of two new works to have their premieres in Wuppertal, Germany. The second, “Bon Voyage, Bob…,” by the Norwegian choreographer Alan Lucien Oyen, came in June.

Just a month later, the woman who had commissioned the pieces, Adolphe Binder, was dismissed as the director of Tanztheater Wuppertal, barely a year into her tenure. 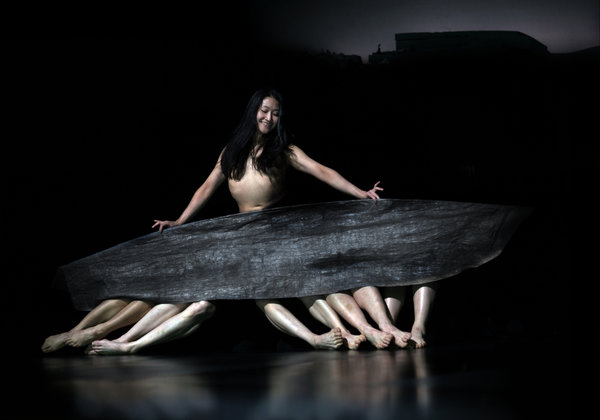 The new works, seen at Sadler’s Wells here, are an important milestone in the history of this company, which hadn’t performed work by anyone other than Bausch for 45 years. No pressure then, for Mr. Papaioannou and Mr. Oyen.

Whatever the reasons for Ms. Binder’s dismissal (the company has remained silent), her choices were good ones. Mr. Papaioannou and Mr. Oyen have acquitted themselves with honor in an impossible task: retaining their own identities while creating pieces that satisfy audiences who love Wuppertal’s distinctive performers and Bausch’s episodic, tragicomic evocations of the absurdities and obsessions of daily life.

[Read about the genesis of Tanztheater Wuppertal’s new works]

Both pieces are Bausch-like (and Bausch-lite), but in different ways. Mr. Papaioannou (best-known for staging the opening and closing ceremonies of the Athens Olympics) began his career as a visual artist and spent several years working with the stage director Robert Wilson, whose influence is apparent in the slow-paced, often exquisitely beautiful tableaus in “Since she.”

But Mr. Papaioannou pays overt homage here to Bausch, beginning with the opening — dancers climbing over a jagged line of chairs — that evokes her “Café Muller” and the dramatic black mountain that dominates the stage (designed by Tina Tzoka), recalling the cavernous graveyard of Bausch’s “Viktor.”

“Since she,” set to a mélange of music (by Wagner, Christos Constantinou, Mahler, Tom Waits, among others) offers a succession of fantastical images and dreamscapes that call up Greek myth, a descent into the underworld, religious iconography and images from Hieronymus Bosch or Dalí. (There is no speech, and very little movement that you might call dance.)

The work, though, is gloomier and more serious than Bausch’s, which for all its depictions of human despair, also saw the ridiculous comedy of being human. The concentrated 90-minute focus of “Since she” is both appealing and airless, impressively crafted and curiously unmoving.

Almost the opposite is true of “Bon Voyage, Bob…,” a baggy, rambling gush of a piece that, at close to four hours with an intermission, is way too long and emotionally overwrought, yet oddly absorbing. Like “Since she,” it’s about death and Bausch, starting with a man stopping the clock.

Yet, it’s very different. Mr. Oyen, an artist in residence at the Norwegian National Ballet, also runs his own theater group, Winter Guests. His storytelling instincts prevail in “Bon Voyage,” which essentially offers veteran Bausch performers (among them Helena Pikon, Andrey Berezin, Nazareth Pandero, Julie Shanahan) in a series of stories and vignettes about death and grief that take place on a rotating, ever-changing set (bravo, Alex Eales).

The aesthetic and the atmosphere are deliberately Bauschian; the dowdy flower print dresses and Oscar-worthy evening gowns (Stine Sjogren), the constant smoking, the ensemble dance in a ballroom or nightclub, the eclectic music. The choreography too, recalls Bausch, with the narratives punctuated by occasional solos or duos full of weaving arms, tossing heads and slippery floorwork. Beautifully danced by the younger company members Jonathan Frederickson, Emma Borrowman, Christopher Tandy and Stephanie Troyak, they feel a little inconsequential within the work.

Indulgent and sometimes exasperating, “Bon Voyage” is nonetheless admirably full of life as well as death. Mr. Oyen, following Bausch’s practice, developed his piece by asking questions of the dancers. But he allows their narratives to ramble, losing pace and impact.

There is a very good two-hour work in here; if Mr. Oyen could practice some ruthless editing, it might emerge. Bausch knew that what resonates is often what is left unsaid.