Trevor Noah celebrated the court conviction of Joaquín Guzmán Loera, the Mexican drug kingpin known as El Chapo, but wondered about the safety of the jurors who handed down the verdict.

Noah quoted from a Fox News report saying that the jury had spent 34 hours deliberating.

“Today a jury in New York convicted Mexican drug lord El Chapo, and now he’s facing life in prison. I’ll have a joke about this after I’m 100 percent sure he’s spending his life.” — JIMMY FALLON

Noah poked fun at President Trump for promoting a touched-up version of a campaign mantra during a speech in El Paso on Tuesday. When the crowd chanted, “Build the wall,” the president admonished: “You really mean ‘Finish that wall,’ because we’ve built a lot of it.” Noah was not convinced.

“They’ve built a lot of it? Wait, what? So now we’re doing ‘Finish the Wall’? I don’t know how much actual work they’re doing on the border, but I guess in Trump’s chant world they’re making a lot of progress. Yeah. ‘Build the Wall! Finish the Wall! Cool, We Built the Wall! Build Another Wall! On Top of the Old Wall! Double-Decker Wall!’” — TREVOR NOAH

Jimmy Kimmel suggested that to figure out whether Mr. Trump will approve a bipartisan border-security deal, he would look to Fox News.

“Republicans and Democrats last night did the unthinkable and reached a deal to keep the government open. Now it’s up to Sean Hannity and Ann Coulter to decide if the president will sign it.” — JIMMY KIMMEL

Conan O’Brien announced that he’s going to Australia next week — and it’s at least partly because he’s scared of Hugh Jackman.

Noah and Colbert will chat on “The Late Show” on Wednesday. 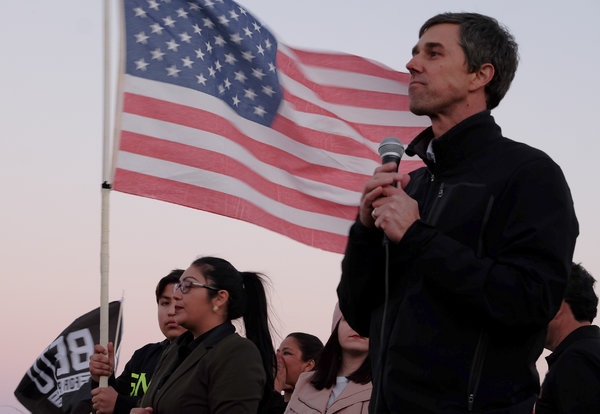 Selecting a strong Democratic candidate for 2020 will depend on finding someone compelling — or outrageous — enough to wrest screen time away from Trump, our media critic writes.