The first photo that appears in The Year in Pictures, The New York Times’s annual celebration and review of photography, was taken on Jan 1. Just seconds into 2020, in the heart of Times Square, the photographer Calla Kessler captured what was likely the first New Year’s photo of a same-sex couple kissing to be printed on the front page of The Times.

Nearly every editor and writer who worked on The Year in Pictures had the same reaction to the celebratory scene in the frame: “These people had no idea what was coming.” 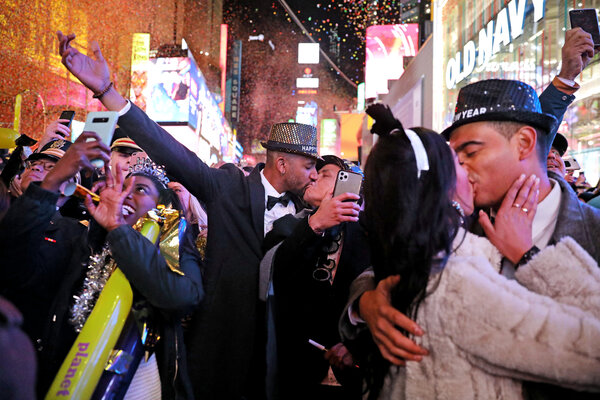 We had no idea what was coming.

The year began with a mysterious respiratory ailment in Wuhan, China, and President Trump’s impeachment trial. Late in the spring, the death of George Floyd, Black Lives Matter protests and civil unrest gripped the nation. Wildfires and hurricanes devastated parts of the United States. Justice Ruth Bader Ginsburg died and Amy Coney Barrett joined the Supreme Court. Joseph R. Biden Jr. became the first candidate to defeat an incumbent president in an election since 1992, and Kamala Harris is the first woman elected to serve as vice president. Along the way, Kobe Bryant and John Lewis died. The coronavirus continues unabated in the United States.

“I don’t think there’s been a bigger news year since 1968,” Dean Baquet, The Times’s executive editor, said in a planning meeting.

The Year in Pictures was published online this week and appears in Sunday’s newspaper. Even in an ordinary year, the project is a huge undertaking that calls on talent from across the newsroom. Dozens of printed proofs would have lined the floors and walls in the office while a group of designers and editors hovered, moving photos and pages around.

With the majority of the newsroom working remotely this year, however, designers and editors debated these details over videocalls, squinting at layouts on screens and 8.5-by-11-inch pages from household printers.

“Sometimes our sessions were three hours long,” said Mary Jane Callister, an art director, who designed the print section with her design colleague Carrie Mifsud. “It was a real challenge to tell the story in 36 pages,” she said.

Perhaps no two people were as close to this Year in Pictures than Jeffrey Henson Scales and David Furst, the lead photo editors of the Opinion and the International desks, respectively. In recent months, Mr. Furst and Mr. Henson Scales, who helped lead the project, reviewed around half a million published and unpublished photographs. (By Nov. 1, Mr. Henson Scales had reviewed at least 16,410 photographs by Doug Mills, a staff photographer in the Washington bureau, alone.)

“The areas that The Times covered, it covered them really strongly,” Mr. Henson Scales said. On an average day, Times photographers file 1,000 to 1,500 photographs.

“I don’t know that I have ever come across a body of work that’s as complicated as this one,” Mr. Furst said.

In addition to an introduction written by Mr. Baquet, the project includes pictures woven with firsthand accounts from photographers, who provide behind-the-camera context. That feature was first used in 2019. This year, it was especially important to read what went into the work, Mr. Furst said. There are always photographers around the world living the story they cover — under oppressive governments, or in residential neighborhoods that turn into battlefields of war — but in 2020, everyone lived it.

Readers hear from Mr. Mills, who worried about taking the virus from White House events home to his family, and Sara Krulwich, a culture photographer for The Times, who had to navigate months with no live performances to shoot. Tyler Hicks spent weeks in the Brazilian Amazon documenting the toll of the virus there.

Lawrence Bryant, a photographer for Reuters, shared his experience photographing Patricia and Mark McCloskey, who wielded guns at Black Lives Matter protesters in front of their house in St. Louis.

“He talks about his fear of this woman pointing a gun at him and trying to figure out where he could be safe from that,” Mr. Henson Scales said.

When asked what he wants readers to feel, Mr. Henson Scales responded: “It was a long year, filled with heroics. And thus far, we’ve made it through. Be glad of that.”