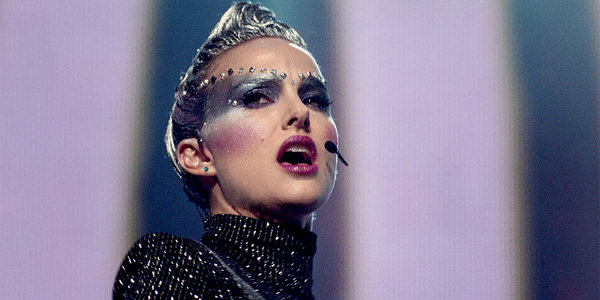 Brady Corbet was 10 in 1999, when the Columbine High School massacre ripped through the American psyche. Sixteen years later, he was living with his wife and infant son in Paris, while editing his feature directorial debut, “The Childhood of a Leader,” when terrorists attacked the Bataclan and other sites around the city.

Corbet’s new film, “Vox Lux” — what he calls a “21st-century portrait” — begins with a 1999 school shooting in Staten Island, N.Y., and a steely focused 13-year-old survivor: Celeste (Raffey Cassidy), who in the tragedy’s aftermath performs a song written with her older sister, Eleanor (Stacy Martin). A video of it goes viral, hurtling Celeste toward sanctified pop stardom with the help of a sleazoid manager (Jude Law).

Cut to 2017 when Celeste — now played by a brash, strutting, bedazzled Natalie Portman — has attained Lady Gaga-esque success, along with the proportional scandals: debilitating substance abuse and a teenage pregnancy that resulted in a now-teenage daughter (Cassidy again). And, on the eve of Celeste’s comeback, the use of her image during a terrorist attack.

“Vox Lux” was nominated for the Golden Lion, the highest prize given at the Venice Film Festival. It opens on Friday, Dec. 7, in New York and Los Angeles before a national rollout. KATHRYN SHATTUCK

All of the art world’s money and madness are on display in Miami Beach in early December when 200 international galleries converge for the fair known as Art Basel. If you can tune out the parties and the noise, it’s also an opportunity to see scores of ambitious mini solo shows in a single afternoon.

Galerie Maria Bernheim, to give just one example, will be there from Zurich with drawings and paintings by the Dagestan-born, New York-based Ebecho Muslimova. Working with an irresistibly appealing graphic black line and weirdly innocent raunchiness, Muslimova runs a character called Fatebe through an endless series of high-concept sex jokes. In recent paintings, like “Fatebe Thin Ice Skating,” from 2018, the jokes are getting even spacier. WILL HEINRICH

First, Rachel Brosnahan scored the gig as Midge Maisel — a Jewish housewife in 1958 New York who discovers her funny bone when her perfect life crumbles — even though she’d never done stand-up. Then she won an Emmy for lead actress in a comedy series. Now she’s back in rare form, and as rat-a-tat raunchy as ever, in the return of “The Marvelous Mrs. Maisel” on Wednesday, Dec. 5, to Amazon Prime Video.

Season 2 sends Midge running in circles — in color-coordinated heels and handbags, of course — as she chases after her parents (Tony Shalhoub and Marin Hinkle) from Paris to the Catskills, N.Y., while being propelled by her tireless manager (Alex Borstein) around Manhattan clubs that remain a men-only sanctum. Meanwhile, her ex-husband (Michael Zegen) makes it clear that, feelings aside, he just can’t stomach being the butt of her jokes.

Will Midge find success? Will Midge find love? Will Midge’s family ever find out the truth? If not this round then perhaps the next: “The Marvelous Mrs. Maisel” has already been renewed for a third season. KATHRYN SHATTUCK

When she was choreographing a new work for American Ballet Theater earlier this fall, Michelle Dorrance encouraged her dancers to push beyond their boundaries by reciting a quote by the tap master Jimmy Slyde: “If you’re not risking falling, you’re not really sliding.”

This week, Ms. Dorrance takes a risk herself with a daring slide into yet-another tap experiment. In “Elemental,” she collaborates with the associate artistic director of Dorrance Dance, Nicholas Van Young, to create a site-specific work for the BAM Fisher.

Their 2016 work, “ETM: Double Down,” transformed the stage into an instrument. For the premiere of “Elemental,” which features 13 performers — Dorrance and Van Young included — their aim is to turn the intimate space into an auditory playground. Along with dancing, the evening-length work highlights original music by the pianist Donovan Dorrance, the bassist Gregory Richardson and the vocalist Aaron Marcellus. Where does the body end and the sound begin? In Ms. Dorrance’s world, they live as one. GIA KOURLAS

Theater: ‘The Jungle,’ a Way Station for Refugees

In Calais, France, the refugees expect bulldozers to descend any minute, razing whole swaths of their camp. Known as the Jungle, it’s a way station filled with desperation but also hope. When the police arrive, they’ll fire tear gas to force the residents to flee.

“It is our job to rehumanize the situation,” a volunteer counsels, adding that the police “cannot be violent if they see that you are a person, a human being like them.”

Unworldly advice, yes, but it works as a raison d’être for a play like “The Jungle.” Just off a five-month run in London’s West End, where Michael Billington of The Guardian declared it “that rare thing: a necessary piece of theater,” the show starts previews on Tuesday, Dec. 4, at St. Ann’s Warehouse in Brooklyn.

Written by Joe Murphy and Joe Robertson, and directed by Stephen Daldry and Justin Martin, it takes place in 2015 and 2016 at the now-demolished camp. The set is an Afghan cafe in the Jungle, and the audience sits right in the midst of it, surrounded by its clamor of humanity. LAURA COLLINS-HUGHES

In 2013, when New York City Opera presented it, Mark-Anthony Turnage’s straight-from-the-tabloids opera “Anna Nicole” partly precipitated the longstanding company’s downfall (before it was revived three years later). By then, Turnage had become a celebrated British composer who channeled the rhythmic vitality of popular music into a knottily lyrical sound.

More than two decades prior to that controversial opera, Turnage composed his breakthrough theatrical work: the youthfully punkish “Greek,” which updates Sophocles’s tale of Oedipus Rex to a gritty 1980s London. That bleary-eyed opera, in a new production by Opera Ventures and Scottish Opera, arrives at the Brooklyn Academy of Music this week as part of the Next Wave Festival. WILLIAM ROBIN

“True love will always have its way,” sings John Prine on his latest album “The Tree of Forgiveness.” It’s a remarkably optimistic tone for the 72-year-old singer-songwriter, whose critical acclaim mostly stems from his sardonic assessments of American culture. But in the context of his full catalog, the straightforward romance of his more recent lyrics actually fits right in.

For nearly a half-century, Prine has been politically outspoken yet poetic, favoring understatement — his 2009 joint album with Mac Wiseman is titled “Standard Songs for Average People.” His work is a reminder of country music’s core: stories about American life that elevate everyday struggles and triumphs into art and underscore its ironies with humor (and a little fiddle). Songs like “Angel From Montgomery” and “Sam Stone” have earned him the reputation of a songwriter’s songwriter — Johnny Cash and Bob Dylan both expressed their admiration for his work.