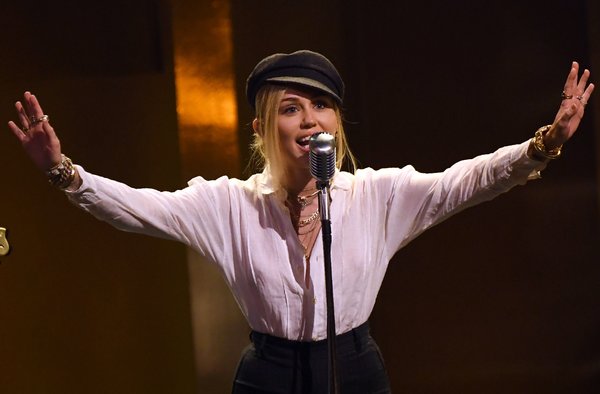 Every Friday, pop critics for The New York Times weigh in on the week’s most notable new songs and videos — and anything else that strikes them as intriguing. Just want the music? Listen to the Playlist on Spotify here (or find our profile: nytimes). Like what you hear? Let us know at [email protected] and sign up for our Louder newsletter, a once-a-week blast of our pop music coverage.

Mark Ronson featuring Miley Cyrus, ‘Nothing Breaks Like a Heart’

What kind of singer is Miley Cyrus (this week)? Moody, a little spooky, a little country. What kind of producer is Mark Ronson (this week)? A melodramatist preoccupied with vintage soundtracks, American roots music and gravitas. Their sweaty collaboration, the first single from Ronson’s upcoming album, telegraphs seriousness more than it delivers it. With Miley, light absurdity always lurks right around the corner, which means that song — with its swirling echoes of Lana Del Rey, and also Shirley Bassey’s “Diamonds Are Forever” — never quite lives up to its gilded edges, and never quite settles in its purple heart. JON CARAMANICA

Noisy guitars and brute force, with a walloping, clanking beat, drive this dystopian ditty of coercion, credulity, virtual reality and conquest by artificial intelligence. “What will it take to make you capitulate?,” Grimes sings, and later, “You’re not even alive if you’re not backed up on a drive.” Her voice is high and girlish but not at all naïve. JON PARELES

This month Jeff Tweedy of Wilco has published a memoir, “Let’s Go (So We Can Get Back)” and released a solo album, “Warm,” full of homemade-sounding songs that consider memory, legacy and mortality. The countryish “Don’t Forget” is full of advice both modest and expansive: “Sometimes we all think about dyin’,” he sings. “Don’t let it kill you.” PARELES

A lighthearted extended metaphor in which a young female country singer exacts kiss-off revenge against the sort of guy who populates most country songs:

2 a.m., streetlights are out and bars are closing
You still come over, yeah, you’re hoping
I’m open
‘cause you feel like something sweet

Needless to say, the drive-through window is closed. MacKenzie Porter delivers the rejection sweetly and optimistically, as certain of herself in dismissal mode as the male performers who never imagine a time when the window will be closed to them. CARAMANICA

Unfortunately, it doesn’t really matter that these two songs aren’t among the strongest on the new Meek Mill album, “Championships.” They serve as totems, reminders that Meek has moved on — settled his feud with Drake, and left his ex, Nicki Minaj, so far in the rear view that he’s collaborating with Cardi, her prime antagonist. In the elaborate game of public chess that is his return to the spotlight following an extended and somewhat Kafkaesque entanglement with the legal system, these are loud moves. But while they stand out for the initial sticker shock, they don’t then underscore why these alliances might be musically beneficial. Meek and Drake aren’t a naturally smooth fit, and while he’s more simpatico with Cardi, they sound at odds here. Given the outsize attention these collaborations are likely to attract, they feel more like stunts than creative choices, and run the risk of reducing his rebounding career to the symbolism he deploys. He’s capable of better. CARAMANICA

At the start of “One Night Only,” Gregory Porter’s first-ever live album, a billow of applause dies down at the Royal Albert Hall and Vince Mendoza’s 70-piece string section drifts in. “Better be good, huh?” Porter says, teasing the enthusiastic crowd. It’s a king’s move: He’s certain of what they’re there for, and of his ability to deliver. Within moments he’s singing his take on “Mona Lisa,” buttery warmth welling up inside each note. On his lips, this nearly 70-year-old song’s lyrics are more than old novelty (“Are you warm, are you real, Mona Lisa?/Or just a cold and lonely, lovely work of art?”); they press questions about ineffability and solitude — whether we can ever see inside a work of art, or into one another. And, yes. It’s good. GIOVANNI RUSSONELLO

Mary Halvorson, ‘With a Little Help From My Friends’

What is the experimental guitarist Mary Halvorson — whose style is so tight, distinctive and weird — doing on a big-label tribute to the Beatles’ “Sgt. Pepper’s Lonely Hearts Club Band,” a project that would practically seem to shout “accessible!” Well, this Beatles tribute is not like the rest. Verve’s “A Day in the Life: Impressions of Pepper” features adventurous renditions by some of the more riveting rising voices in jazz. And Halvorson has crafted a winning version of “With a Little Help From My Friends” out of just a couple of overdubbed guitars, some effects and the sparse drumming of Tomas Fujiwara. The track honors both the singsong nostalgia of the original and the overleveraged authenticity of the Joe Cocker version, but ultimately goes its own way. What begins with a screwy reharmonization of the opening verse becomes a contortionist’s dance through various rhythms: arena-rock pummel, disfigured march, twisted shuffle. RUSSONELLO

Musicians and their toys: Blake Mills, who has produced Fiona Apple, Alabama Shakes and John Legend and released albums on his own, grew fascinated by guitar synthesizers made by Roland in the late 1970s and used them to record a wordless, atmospheric EP, “Look.” It’s clear what drew him: a palette of sounds that can be orchestral and abstract but still controlled by a guitarist’s human touch. “Three” is the album track with the most overt beat, under washes of chords that find drama looming within meditation. PARELES

Peder Mannerfelt, Fever Ray’s producer, also records electronic music on his own, grounded in techno but far too amorphous and exploratory to stay there. “This Machine Generates Memes” from his new album “The Daily Routine” has a frantic six-beat rhythm underlying electronic whines, hisses, slides, sonar bloops and equally frantic cross-rhythms, racing toward murky goals. PARELES

Jon Pareles has been The Times’s chief pop music critic since 1988. A musician, he has played in rock bands, jazz groups and classical ensembles. He majored in music at Yale University. @JonPareles

Jon Caramanica is a pop music critic for The Times and the host of the Popcast. He also writes the men’s Critical Shopper column for Styles. He previously worked for Vibe magazine, and has written for the Village Voice, Spin, XXL and more. @joncaramanica