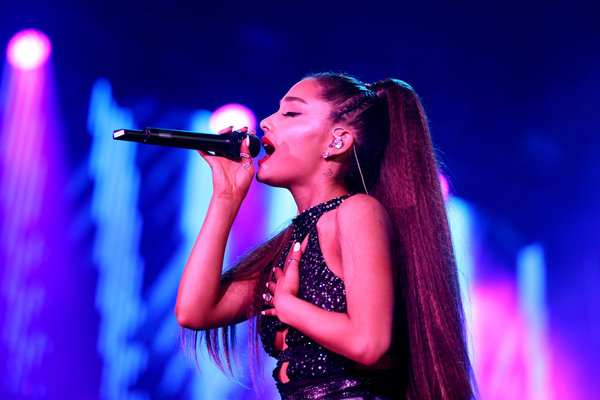 Every Friday, pop critics for The New York Times weigh in on the week’s most notable new songs and videos — and anything else that strikes them as intriguing. Just want the music? Listen to the Playlist on Spotify here (or find our profile: nytimes). Like what you hear? Let us know at [email protected] and sign up for our Louder newsletter, a once-a-week blast of our pop music coverage.

Ariana Grande, ‘Break Up With Your Boyfriend, I’m Bored’

A couple of months ago, Ariana Grande explained her new strategic philosophy to Billboard: “My dream has always been to be — obviously not a rapper, but, like, to put out music in the way that a rapper does.” Which is to say not on a traditional tightly-controlled pop star rollout, but in the drip-drip-drip fashion of the streaming era, in which artists bombard listeners with music in rapid succession, barely leaving room to reflect. And yet the period leading up to the release of “Thank U, Next,” Grande’s fifth album, which was released on Friday, hasn’t been quite that radical. There were singles, and videos, and now an album — nothing to fear here. The latest single is “Break Up With Your Boyfriend, I’m Bored,” a satisfying thumper with an astral-trap beat and Grande deciding that, in fact, she’d like to be the other kind of rapper as well. Not to say that she’s purely rapping on this song, but rather that rapping as an act has melted so thoroughly that the chasm between what it currently is and what Grande is doing here isn’t very vast. So much so that when she belts out a few lines near the song’s end it sounds like someone else altogether has arrived.

(Grande spends the whole video stalking a couple made up of a handsome young man and a Grande doppelgänger. She keeps urging them to split, up until she inserts herself between them, and then she chooses … herself.) JON CARAMANICA

The Japanese House, ‘We Talk All the Time’

“We don’t touch anymore/But we talk all the time so it’s fine,” sings Amber Bain, who records her solo, intricately produced pop as the Japanese House. She’s assessing the later stages of a romance: “Somebody tell me what I want/‘cause I keep on changing my mind.” She surrounds herself with synthesizers and vocal harmonies that can reflect the dizzying swirl of remembered infatuation or the steady trudge of everyday partnership; when the song ends, she still hasn’t figured things out. PARELES

A path to solace is indirect and uncertain in “Noise,” the first release from the Brooklyn-rooted songwriter Zsela (whose father is Marc Anthony Thompson, a.k.a Chocolate Genius). Her voice is sumptuous and her phrasing is curvaceous and conversational in “Noise,” a hushed ballad that moves with the rhythm of breathing, not machines. Its backdrop subtly shifts from the sparsity of a lone electric piano to subdued orchestral instruments, and its chords start out unresolved and move in and out of hymnlike uplift, as she ponders the breakups of others and her own: “Cannot count the ways you used to love me,” she muses. “But I can count the ways you used to try.” JON PARELES

How sensitive can a guy be? This sensitive. “Can’t we just talk/figure out where we’re going?,” Khalid pleads. There’s a tryst, with “flowers in the room,” but also a reckoning; whatever happens will have to be consensual. The loop has hi-hat sounds and syncopated synthesizers — from Disclosure — as Khalid hops between tenor and falsetto. The result of this negotiation isn’t guaranteed. PARELES

Cool-kid pop made by the kids hiding out under the bleachers, “Homework” is a soothing, crypto-melancholy anthem about reflecting on young love. Kim Petras has a warmly synthetic voice, and lil aaron raps in a reassuring tone — together, they’re a sweet, effective pair, delivering teen-flick coming-of-age sparkle with little flickers of gone-too-far darkness. CARAMANICA

This ghostly whisper of a waltz is from “Quiet Signs,” the new album by Jessica Pratt. Like the rest of the album, the backup is minimal — acoustic guitar picking, a few notes from a piano — and the production’s low-fi hiss makes Pratt’s soprano even wispier. She sings about singing in “Crossing,” with words dissolving into wordless syllables, turning into an elusive lullaby. PARELES

The trumpeter Christian Scott aTunde Adjuah’s pieces often feel like something more than songs, or at least outside of them. They’re like a film composed only of long and powerful shots: The music starts intense and grows more so — comfortable at a steadfast medium tempo, not needing a lot of harmonic movement to swell and push onward. On “Ancestral Recall,” the title track from Scott’s forthcoming album, the focus is squarely on the drums and percussion, which maintain a rabbling, six-beat groove adorned by little more than a ghostly synthesizer and Scott’s scorching trumpet. Then there’s the poet Saul Williams, uttering lines that unpack the tune’s title: “Earth as my hard drive, sky as my witness/There’s no such thing as small spirits, ancestral minorities/Take breath through nature’s hidden forces.” GIOVANNI RUSSONELLO

Bassekou Kouyate, from Mali, plays the ngoni, a West African lute that’s a likely ancestor of the banjo, and he leads Ngoni Ba, featuring ngonis of various sizes down to a bass ngoni. “Miri” (“Dream”), the title track of his new album, is an instrumental reverie based, the liner notes say, on worries about Mali’s Islamist insurgency and about climate change. Its fingerpicked vamp carries insistent minor-key melodies and a little bit of ngoni shredding. PARELES

A New Orleans jazz band — clarinet, trombone, her own banjo — backs Leyla McCalla in the title song of her new album. The wryly old-fashioned slow-drag setting belies the hardheaded economic realism of “The Capitalist Blues,” a theme statement for an album full of songs about trying to get by in a ruthlessly market-based world. “I am swimming in an ocean of sharks,” McCalla sings, graceful but resigned. PARELES

More cheerily melodic tragedy from the Savannah, Ga., rapper Quando Rondo, who is signed to the imprint of the Baton Rouge realist YoungBoy Never Broke Again. In its production, “Gun Powder” has some of the lighthearted toughness of the early T.I./Young Jeezy era, but the real amusement is in how Quando Rondo almost smirk-shrugs his way through some very bitter words: “Send a text to all the opps like, yeah, we want all the smoke/We up by 6, they down by 2, they need to go fix the scope.” CARAMANICA

Miho Hazama, a Japanese-born, classically trained composer, is starting to make waves in New York. On Friday she released “Dancer in Nowhere,” her latest album with m_unit, an ensemble combining typical elements of a jazz big band with strings, vibraphone and French horn. The title track starts with the violins in a tentative, prickly dance, before the tenor saxophonist Jason Rigby alights, playing a repetitive melody — unresolved but deeply satisfying — over a bed of strings and horns. A heavier, more percussive section barrels in, with a melody derived from the original line. The song ends back on that soaring first passage, the band playing faster now and Rigby improvising into the beyond. RUSSONELLO

With the slow, misty grace of a requiem, “Memories of Nanzenji” finds the keyboardist and crossover-jazz guru Mark de Clive-Lowe reflecting on a visit to the historic temple and gardens in Kyoto, Japan. Featuring a quintet that includes the whirling alto saxophone of Josh Johnson, this tune appears on “Heritage,” a new album out on Friday. It was largely recorded during a run of shows at the Blue Whale in Los Angeles, then de Clive-Lowe augmented the recordings in the studio, adding layers of synthesizer and more. RUSSONELLO

The Chainsmokers featuring 5 Seconds of Summer, ‘Who Do You Love’

Jon Pareles has been The Times’s chief pop music critic since 1988. A musician, he has played in rock bands, jazz groups and classical ensembles. He majored in music at Yale University. @JonPareles

Jon Caramanica is a pop music critic for The Times and the host of the Popcast. He also writes the men’s Critical Shopper column for Styles. He previously worked for Vibe magazine, and has written for the Village Voice, Spin, XXL and more. @joncaramanica