LONDON — Oedipus is wearing a bright red tracksuit. His parents, brandishing beer bottles, are off to the pub to watch a football match. “So, I was born in Tufnell Park,” he says aggressively to the audience, adding: “It’s a cesspit!”

Yes, we are at the opera.

To be precise, Mark-Anthony Turnage’s “Greek” (1988), which makes its New York debut at the Brooklyn Academy of Music on Wednesday in a production from Opera Ventures and the Scottish Opera. In the 80-minute opera, Sophocles’s “Oedipus Rex” is moved to the trash-strewn streets of a contemporary London troubled by the plagues of unemployment, poverty, police brutality and consumerism.

There, working-class East Enders rail against immigrants, brawl and offer football chants to the gods, while the story’s protagonist, known as Eddy, tries to escape the fate a fortune teller predicts: He will kill his father and marry his mother. Of course he can’t evade his destiny, as a line in the opera has it: “Fate makes us play the roles we’re cast.”

“Greek,” based on Steven Berkoff’s rambunctious 1980 play of the same title, was a breakthrough for the 26-year-old Mr. Turnage, who went on to write the much-lauded opera “Anna Nicole” (2011) and “Coraline” (earlier this year), and who today is considered one of Britain’s most important composers.

But early on, Mr. Turnage was uninterested in opera. The idea of writing one came from the German composer Hans Werner Henze, who suggested an opera commission from Mr. Turnage for the first Munich Biennale, which Mr. Henze was directing. Mr. Turnage refused.

“Opera wasn’t something I grew up with, and I didn’t feel equipped,” he said in an interview recently. “But Hans, who was a very instinctive person, must have sensed something dramatic in me and he persevered. He would have these lavish parties where everyone got very drunk on good red wine, and then he would say, ‘You must write for the theater!’”

Henze suggested adapting a play by Edward Bond, but after failing to make contact with Mr. Bond, Mr. Turnage saw a profile of Mr. Berkoff on television. He was attracted by his streetwise, irreverent approach and went to see the playwright, who proposed “Greek” as the most operatic of his plays. 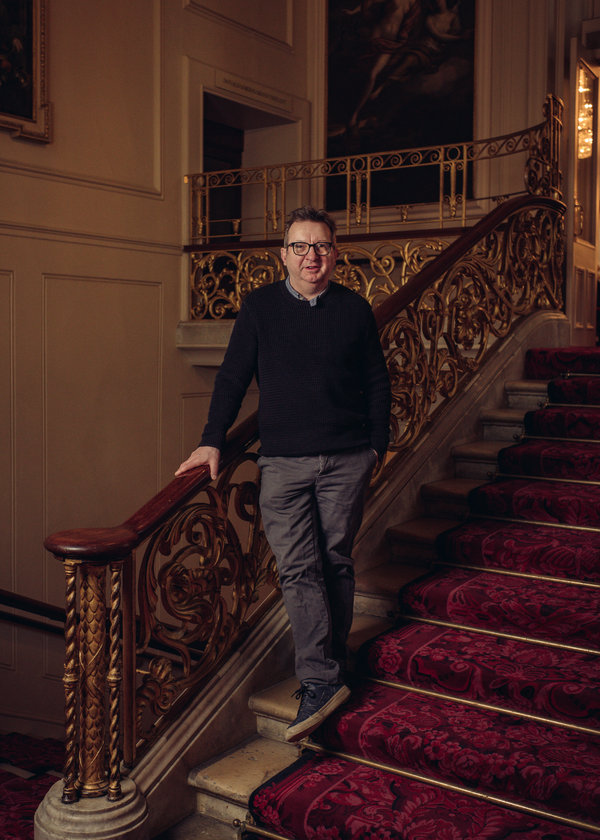 Although Mr. Berkoff is credited with the opera’s libretto, the text was adapted by Mr. Turnage and the first production’s director, Jonathan Moore. “I didn’t know anything about opera,” Mr. Turnage said, “so in the first draft I literally just crossed out all the lines I didn’t want to set.”

After Mr. Moore, a former actor, became involved, they worked together, locating the high points and shaping the dramatic flow. But they kept intact most of the play’s elements, including a small cast of four, three of whom (Susan Bullock, Allison Cook and Andrew Shore in the Scottish Opera staging) play all the characters that Eddy (Alex Otterburn) meets.

“We were blessed with the confidence of ignorance,” Mr. Moore recalled in an interview. “Now in the opera world, we are besieged by workshop-itis. But then, Henze and Berkoff just let us get on with it, and Mark and I banged it out in his tiny bedroom in a shared flat, where he had an upright piano in a corner.”

Mr. Berkoff had been right about the play being operatic, Mr. Turnage said: “A lot of the speeches were already like arias, because they were so emotionally intense, but the language was everyday and direct. I felt there was no point trying to make it into high art or something precious.”

Instead of working in the atonal vein he had used for small chamber pieces, he said, he “threw in a lot of rhythmic stuff, chanting, percussion, wind instruments in your face and aggressive.” He tried, he added, to match the energy and verve of the text, or, as he put it, “max the Berkoff.” To that end, he drew inspiration from rock and heavy metal bands he was listening to at the time, asking the orchestra to chant obscenities, strike riot shields with truncheons, and stamp their feet. It is, Mr. Moore said, “a beer and pizza opera.”

Neither Mr. Turnage nor Mr. Moore knew what to expect at the 1988 premiere in Munich, but the audience adored the conversational, often foul-mouthed lyrics and the musical melding of brashness and lyricism. “I had hoped for a ‘Rite of Spring’-type succès de scandale, and instead we had a 12-minute standing ovation,” Mr. Moore said, faux-gloomily.

It’s not hard to identify parallels between Margaret Thatcher’s Britain of the 1980s — with its creed of individualism, street unrest, financial hardship and disaffected working classes — and the world today. But Joe Hill-Gibbins, the British theater director in charge of the staging coming to Brooklyn, said he didn’t approach “Greek” as 2018-specific, even though he has updated a few references to include Brexit and current politicians.

“There is a bit where we use newspaper headlines, and of course now it has to be Theresa May crawling back on her knees from Brussels,” he said in a phone interview. “There is no point turning it into a museum piece.”

But Mr. Hill-Gibbins added that his central focus was the interplay between the classical myth and a contemporary setting — any contemporary setting. “I am more interested in how these myths survive and resonate today than I am in making a topical social commentary,” he said.

To that end, he has staged the opera on a narrow band of stage in front of a white wall, inspired by the location of much of classical Greek drama in front of a public building or a palace. “It’s also a bit like a Greek frieze,” he said, adding that he didn’t want the performers “hidden behind a proscenium picture frame” because he wanted the confrontational energy he remembers from Mr. Berkoff’s own performances.

Opera singers, he said, were often more comfortable than actors with heightened demands. “They inherently exist in a non-naturalistic world which is extreme,” Mr. Hill-Gibbins said, “and they are not squeamish about addressing an audience directly, which really fits the element of performance and play that is at the core of this piece.”

Asked whether he thought the very British setting and references would go over the head of American audiences, Mr. Turnage said he had no idea. “It’s funny how certain English things, like Monty Python, are massive in America, and other things just don’t travel,” he said. But he predicted that the social situation would probably be resonant, though he wished it wasn’t.

“Every time ‘Greek’ is done,” he said, “I think, wishfully, maybe next time it will be dated.”

Greek
Dec. 5-9 at the Brooklyn Academy of Music; bam.org.