The Obama Presidential Center promises to be a presidential library like no other.

The three-building, 19-acre “working center for citizenship,” set to be built in a public park on the South Side of Chicago, will include a 235-foot-high “museum tower,” a two-story event space, an athletic center, a recording studio, a winter garden, even a sledding hill.

But the center, which will cost an estimated $500 million, will also differ from the complexes built by Barack Obama’s predecessors in another way: It won’t actually be a presidential library.

In a break with precedent, there will be no research library on site, and none of Mr. Obama’s official presidential records. Instead, the Obama Foundation will pay to digitize the roughly 30 million pages of unclassified paper records from the administration so they can be made available online.

And the entire complex, including the museum chronicling Mr. Obama’s presidency, will be run by the foundation, a private nonprofit entity, rather than by the National Archives and Records Administration, the federal agency that administers the libraries and museums for all presidents going back to Herbert Hoover.

The plan was revealed, with little fanfare, in May 2017. Few details of the digitization were made public until Tuesday, when the foundation and the archives unexpectedly released a legal agreement outlining procedures for creating what is being billed as “first digital archives for the first digital president,” which they say will democratize access.

But as awareness of the plan has spread, some historians see a threat to future scholarship on the Obama administration — and to the presidential library system itself.

Without a dedicated repository, they argue, the rich constellations of related material found at the other libraries — papers donated by family members, cabinet members and aides, as well as pre-presidential and personal papers — could end up scattered, or even uncollected. And without help from specialized archivists, the promised digital democratization could just as easily turn into a hard-to-navigate data dump. 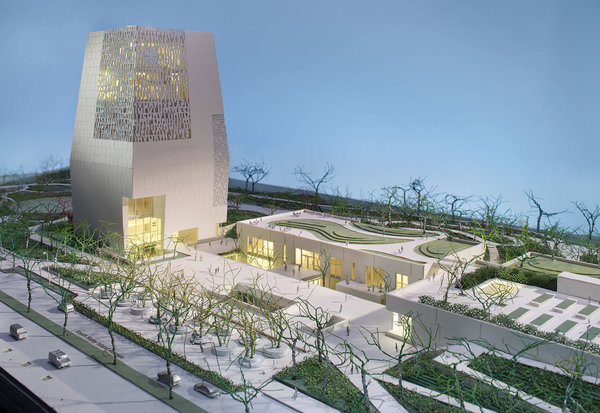 More broadly, there’s concern that the creation of a privately run presidential museum undermines the ideal of nonpartisan public history.

Timothy Naftali, the former director of the Richard Nixon library, where he is credited with overhauling museum exhibits to give a more honest accounting of Watergate, called the decision “a huge mistake.”

“It was astounding to me that a good presidency would do this,” Mr. Naftali said.

“It opens the door,” he added, “to a truly terrible Trump library.”

‘An Act of Faith’

The current system had its origins in 1939, when Franklin D. Roosevelt donated his papers to the federal government and began building a library to hold them near his home in Hyde Park, N.Y. (Before the Presidential Records Act of 1978, a president’s papers were considered his private property.)

“It seems to me that the dedication of a library is in itself an act of faith,” Roosevelt said at the opening in 1941, standing on the porch of the modest Dutch colonial-style structure, which also housed a small display of artifacts.

The library, paid for with private funds, was donated to the National Archives. Since then, the federal system has grown to include all 13 presidents going back to Hoover, whose library was created retroactively.

Today, the museums may draw the crowds, but it’s in the research libraries where historians piece together a more accurate view of a presidency. White House records and other collections at the libraries have, for example, overturned the idea of Dwight D. Eisenhower as a genial, golf-playing figurehead, and revealed the depth of internal debate in Lyndon B. Johnson’s White House over the escalation of the Vietnam War.

“Presidential libraries have opened windows onto how our democracy worked — or failed — at the highest levels,” said Julian E. Zelizer, a historian at Princeton who has done research in eight libraries.

But “America’s pyramids,” as the historian Robert Caro has called them, have also been subject to withering criticism. Over time what were intended as impartial repositories have ballooned into grandiose shrines where former presidents and their foundations wield influence not only at the museums (whose exhibits they pay for) but even, some have charged, in the research reading rooms themselves.

Anthony Clark, the author of “The Last Campaign,” a recent book about presidential libraries, called the Obama Foundation’s break with the existing model “an unambiguous good for the American taxpayer.”

The National Archives “will not be saddled, as it is at the federal presidential libraries of Mr. Obama’s 13 immediate predecessors, with the expense and embarrassment of hosting troublingly politicized exhibits, speakers, events and educational programs,” he said.

Just how the Obama Foundation’s decision to opt out of the current system took shape remains unclear. In Jonathan Alter’s 2010 book “The Promise,” the newly elected President Obama was quoted musing that maybe his future presidential library should be “an online library.”

The idea was certainly in tune with the increasingly digital nature of the presidential paper trail. In addition to millions of pages of paper, the Obama presidential records include some 300 million emails, as well as Snapchat posts, tweets and other born-digital records.

It is also in line with trends at the National Archives, which faces stagnant budgets and an exploding number of records to care for. The agency’s current strategic plan calls for digitizing all its holdings, which it estimates at amounting to some 12.5 billion pages.

In May 2017, when President Obama appeared in Chicago to unveil the design for the center, renderings included a 50,000 square-foot “Library Building.” But the research facility and archives most people had assumed would be inside it had disappeared.

The decision to break with the National Archives model “was not disclosed” at the unveiling, according to The Chicago Tribune. It was not noted in the foundation’s main news release describing the center, but was instead outlined in a separate, terse release.

Some observers are dismayed at what they see as the lack of transparency, and the slow trickle of information from both the foundation and the National Archives.

“They are creating a fog and confusing the public and the broader historical community about what this thing actually is,” Bob Clark, a former director of the Franklin D. Roosevelt Presidential Library and Museum, said in an interview.

“Everybody is still calling it a presidential library, but it’s not,” said Mr. Clark, who published a highly critical article about the Obama decision in the journal The Public Historian. “It’s a museum and a headquarters for a foundation that is funding the National Archives’ goal of digitizing all its documents.”

The Digital Future, or ‘Bait and Switch’?

The decision to forgo an on-site partnership with the National Archives could be problem for the center, which has yet to break ground. A lawsuit currently in federal court is challenging the legality of building it in a public park, calling the abrupt transformation of what had been pitched as a federal “presidential library” into a privately run center an “institutional bait and switch.” (On Tuesday, the judge denied the city’s motion to dismiss the suit and allowed it to proceed.)

Robbin Cohen, the executive director of the Obama Foundation, said in an interview that digitization had been part of the vision from the beginning. “The main goal,” she said, is making the Obama White House records “as accessible and available to the public as possible.”

She declined to be specific about when the decision to forgo a physical library altogether, and to opt out of any National Archives presence in Chicago at all, was made, saying it resulted from an “evolving discussion.”

Ms. Cohen emphasized that the center, while privately run, would have public partnerships. Under an agreement reached last May, it will include a 5,000 square-foot branch of the Chicago Public Library. (The center’s three buildings will have an estimated 325,000 gross square feet.)

And it will work with the National Archives to borrow documents and artifacts for display in the museum, which is headed by Louise Bernard, a former director of exhibitions at the New York Public Library.

Ms. Cohen said that “financial requirements” — including a new law requiring that the foundation pay the National Archives 60 percent of the construction costs of federally run portions, as an endowment to cover future maintenance — were a factor. For previous libraries, the figure was only 20 percent.

But the decision, she said, was driven just as much by the logic of digitization. Under National Archives policy researchers are not given access to paper originals when electronic versions are available.

“Even if we were to build a physical library at the center, the records would still be largely accessed digitally,” she said.

As they are released, the documents will be available through both the National Archives Catalog and a dedicated Barack Obama Presidential Library website. As for research support, a spokeswoman for the National Archives said it would have “the same dedicated kinds of staff” for the Obama materials as it has at existing presidential libraries, but would not say where they would be located or provide further details.

Some scholars are alarmed by the decision. “The absence of a true Obama presidential library will have the effect of discouraging serious and potentially critical research into the Obama presidency,” said David Garrow, a Pulitzer Prize-winning historian and the author of “Rising Star,” a nearly 1,500-page biography of Mr. Obama.

Others take a cautiously sanguine view. Mr. Zelizer, the Princeton historian, said there was “enthusiasm for sure” about digital access, but uncertainty over whether the new model would improve or worsen the known frustrations of the current libraries, like huge backlogs in processing and protectiveness around politically sensitive documents.

Ultimately, some in the presidential library system say, the move to a digital model is the future, like it or not.

Meredith R. Evans, the director of the Jimmy Carter Library and Museum in Atlanta, wrote in a response to Mr. Clark’s article in The Public Historian that she, too, would have liked a physical federal presence at the Obama center, “for the purposes of objectivity” and “stewardship.”

But the realities of money and technology “cannot be denied.”

“Let’s give the digital a try,” she wrote, “before giving in to dismay.”