‘The Mandalorian’ Season 2, Episode 8: ‘The Rescue’

Throughout this season of “The Mandalorian,” I’ve seen some beefing online about how the show’s creator Jon Favreau has been bringing in pre-existing characters and ideas from the larger “Star Wars” universe. The essence of the complaint is that to understand all the nuances of the story now — to get all the references to “Grand Admiral Thrawn” and “Operation Cinder” and the like — you’ll need to have seen all the cartoons, played all the video games and read all the novels and comics.

To me though, what’s great about this series is that for the most part it makes sense even if you know next to nothing about “Star Wars.” Favreau and his creative team typically provide all the back story we need not just to follow the action, but to be thrilled and moved by it.

Consider a scene right toward the beginning of this week’s episode, “The Rescue.” Din Djarin and Boba Fett walk into a bar, to enlist the help of the Mandalorians Bo-Katan Kryze and Koska Reeves in rescuing Grogu. Boba clearly knows Bo-Katan’s sad legacy. (He derisively calls her “princess” within seconds of walking up to her.) And Koska clearly has reason to resent and distrust this notorious bounty hunter. While Mando looks on, these three snarl about clones, codes of honor and the fate of the planet Mandalore. There’s a lot of history being kicked around here — and nearly all of it predates “The Mandalorian.”

But do you need to have studied it? Absolutely not. What’s happening in this scene is really no different from the moment in a typical western when two old rivals run into each other in a saloon and start fighting about the Civil War or water rights or whatever. It’s not different from the reference to “the Kessel Run,” which remained unexplained in the first “Star Wars” movie. All we need to know is that even though Bo-Katan and Koska have deep-rooted issues with Boba, they agree to help Mando anyway. That’s enough narrative motivation — and complication — to keep us involved with the story.

Having said all that, I’m not going to pretend that this episode’s most dramatic surprise wasn’t all the more incredible to me because I’ve been a “Star Wars” fan since 1977. I’m talking here about the last-minute, day-saving arrival of Luke Skywalker — the franchise’s first and arguably most important hero.

Luke flies in at the very end of a rescue mission that takes up most of the episode. In classic “Star Wars” fashion, once Bo-Katan gets over her dislike of Boba, everyone sits down in front of a holographic map of Moff Gideon’s imperial cruiser, to draw up a plan. They decide to fake an emergency, to persuade the cruiser’s crew to let them board. Then they’ll distract the stormtroopers by firing at them willy-nilly, while Mando sneaks off to find the Child. The key to the whole scheme? Din has to eject Gideon’s supply of superpowered “dark trooper” droids before they’re fully activated.

Peyton Reed, the director of Marvel’s “Ant-Man” movies, directed this chapter (his second this season, after “The Passenger”), and he delivers some intense action, heavy on moments when the characters genuinely seem to be in danger. Bo-Katan’s ship barely scrapes through the cruiser’s TIE fighter launch-tube — as the ships keep zooming out. Fennec Shand has to duck out of the way of a laser-blast headed straight for her head. Cara Dune’s gun jams, forcing her to fight off stormtroopers by clubbing them.

In the most nerve-racking sequence, Mando arrives at the dark trooper barracks just a few seconds too late, and is unable to force them out of their airlock before one slips through the door. Much of this scene is shot from our hero’s perspective, as this near-invulnerable robot with scary red eyes pounds him in the helmet, over and over. Eventually, after a lot of effort and a well-placed thrust of his beskar spear, Din is able to fell this single dark trooper. And then? The dozens of others that he shot out into space come zooming back. 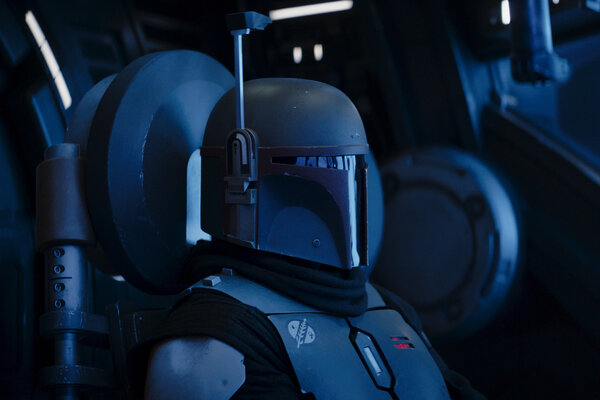 Before that happens, Din does find Grogu, still stuck in his cute handcuffs, with Gideon holding the Darksaber right above his tiny head. The grown-ups tussle, then Mando takes his enemy’s weapon — unaware of the significance of the seizure. A smug Gideon explains that the real reason Bo-Katan came on this mission is that she needs the Darksaber in order to claim her place as the rightful ruler of Mandalore. But Mando can’t just give it to her. She has to beat him in combat.

In short: There’s a lot going on in this episode, beyond one emotionally stunted mercenary’s desperate attempt to save the little green Jedi-in-training he loves so much. For example, there’s some thematically relevant discussion of the dark troopers, who are theoretically superior to any other Imperial force because they aren’t human, and thus aren’t as vulnerable. It’s also important to note Gideon’s explanation for why the owner of the Darksaber has to take it in battle: It’s because the weapon doesn’t have the power, “the story” does.

All of this — the weaknesses of humans and the persuasive resonance of legends — plays into how this season concludes. This should be a triumphant ending. Luke Skywalker is back! (And played by Mark Hamill, too … or at least played by Hamill’s voice and a digital facsimile of his face from 40 years ago.) Baby Yoda is saved! Mando did what he set out to do, getting Grogu into the care of a Jedi master so impressive that he can demolish a horde of dark troopers in mere minutes.

But even though it’s sweet to see R2-D2 beeping away in apparent conversation with the Child, it’s bittersweet to see Din remove his helmet again to say goodbye to his friend. He’s human, and humans form attachments — whether it’s to the mythology surrounding an especially cool-looking laser-sword or to traveling companions and comrades in arms. This is part of the tragic story of Luke himself, who fights his whole life between his Jedi discipline and his emotional bonds with his friends.

No, you don’t need to know that about Luke to be touched by this ending, just as you don’t need to have played “Star Wars Battlefront II” or to have read the novel “Heir to the Empire” to appreciate “The Mandalorian” as a whole. All you need to know is what you’ve seen in the show’s first 16 episodes — which is more than enough to be heartbroken when two soul mates are separated.

Or separated for now, at least. This story, like so many in the “Star Wars” universe, is to be continued.

This is the way:

Ludwig Göransson’s music is always excellent, but his score is especially fine in this episode, starting with the fuller and more rousing version of the opening theme and then culminating with the sinister electronic edge to the dark trooper motif. It reminded me a little of the work Michael Giacchino used to do on “Lost,” where he always seemed to save his most dramatic and stirring orchestrations for the season finale.

I’m not going to lie: I thought the digital effect that slapped the young Hamill’s face onto the “Star Wars” character he originally helped bring to life turned out kind of clunky. But it was awesome to see (and hear) him anyway.

This season doesn’t end on a cliffhanger per se, but there’s certainly plenty left unresolved, aside from the fate of the Darksaber. For one thing, I don’t believe for a second that Gideon got all he needed from Grogu just by drawing a little of his blood. Undoubtedly he’ll be back. I suspect the Child also will return in Season 3 somehow. (What is “The Mandalorian” without Baby Yoda?) And in a post-credits scene in this episode, Boba and Fennec take over Jabba the Hutt’s outlaw gang on Tatooine, in what is apparently the jumping-off point for a new series, “The Book of Boba Fett,” which will undoubtedly cross over with “The Mandalorian.” Fans have a lot to look forward to in 2021.