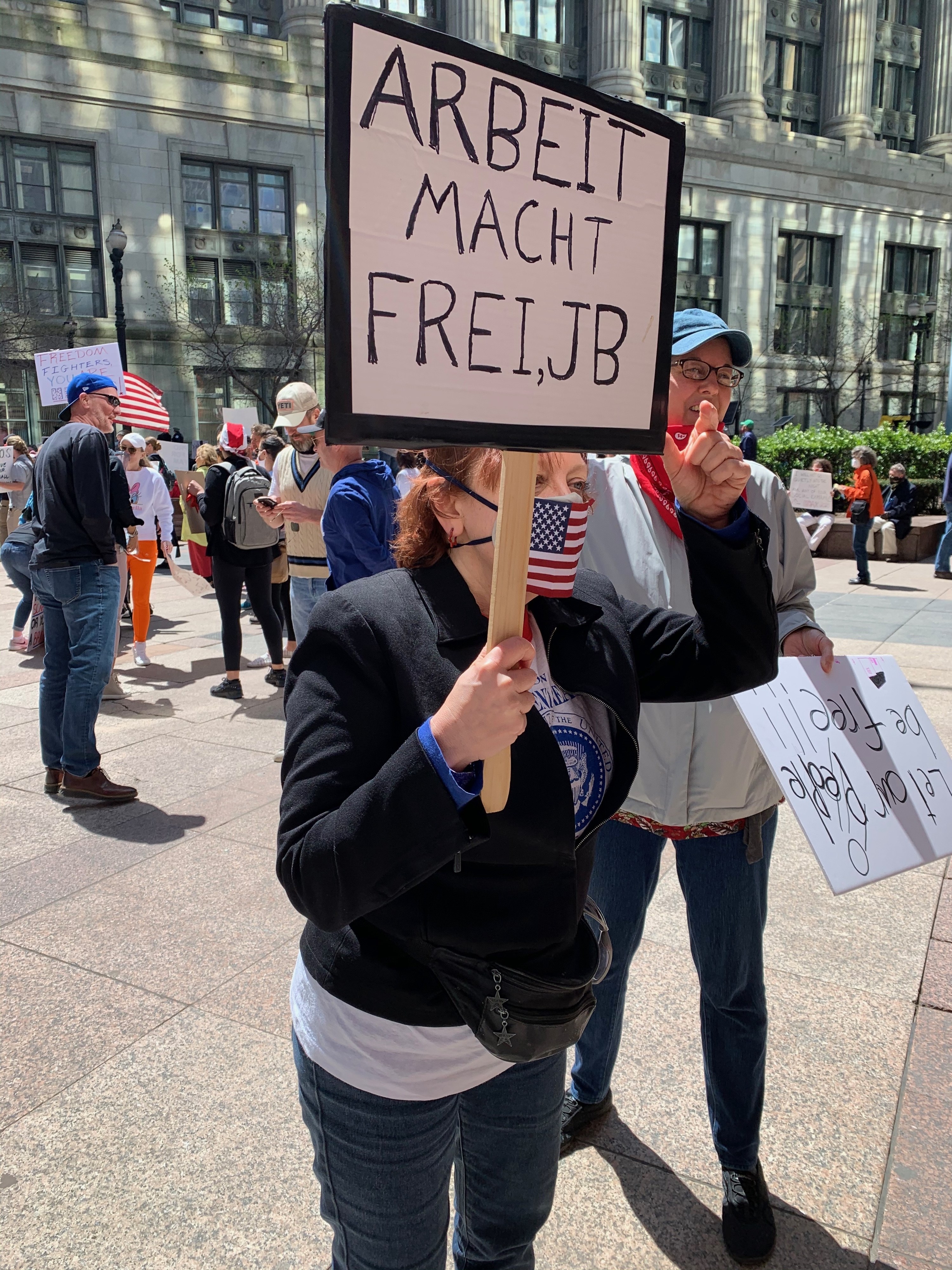 The Auschwitz Memorial in Poland has condemned a viral photo of a sign from an anti-lockdown protest in Chicago on Friday that bore a phrase from the Nazi concentration camp.

The sign reading “Arbeit macht frei, JB” was held by an unidentified woman at a “Re-Open Illinois” protest in the city’s Loop district and addressed to Gov. J.B. Prtizker, who is Jewish. “Arbeit macht frei” translates from German to “work will set you free” and was used on the gates of Auschwitz, where at least 1.1 million people died during the Holocaust.

The photo was taken at around 12:30 p.m. by nurse Dennis Kosuth, who attended the event as a counter-protester.

Kosuth said several anti-lockdown demonstrators were trying to provoke him and other nurses by claiming they were actors or that the death toll from the coronavirus was not accurate. “My approach was to ignore people,” he told BuzzFeed News in a phone interview on Saturday, “but then I saw her sign and said, ‘That’s pretty messed up. Why would you bring that here?'”

According to Kosuth, the woman defended her sign and said she had Jewish friends.

Kosuth, who lost a friend and colleague to the coronavirus this week, said he was disgusted by the sign.

“How dare you compare the Holocaust to a stay at home order?” he said.

Kosuth shared the image on Twitter on Thursday where it was shared more than 14,000 times.

Among those who shared it were staff at the Auschwitz Memorial in Poland, who said it “painful to see this symbol instrumentalized and used again to spread hate.”

Kosuth was unaware of the memorial’s response until his interview with BuzzFeed News, but he said he agreed “100% with that statement.”

“I’m glad in that sense that this picture has gotten out here because it shows the dark side of history,” he said.

There appeared to be some confusion on social media as to whether the sign was real.

In a post Friday, the Associate Press said that a viral photo of a sign citing the “Nazi slogan that translates to ‘Work Sets You Free'” was altered and originally read “Free Small Business!”

But an AP spokesperson made clear to BuzzFeed News that its fact check was in reference to a sign from a Pittsburgh protest on April 20, not Kosuth’s from Chicago.

Kosuth denied that his image was altered, and said he took it with his own phone.

He provided BuzzFeed News with the live photo which showed the woman moving while holding the sign as another woman shouted “the gates of Auschwitz.”

Signs bearing Nazi imagery and phrases have appeared at other anti-lockdown protests, including one in Springfield, Illinois, on Friday, and in Michigan last month.

Asked why he thought his photo had gone viral, Kosuth responded, “I think a lot of people don’t like Nazis — and that gives me hope.”