The fashion designer Kerby Jean-Raymond, known for stylishly addressing race and representation in his designs for his label Pyer Moss, considers his admiration of the artist Derrick Adams born out of a “common belief” — namely, that the trailblazers of black culture must be commemorated. Earlier in the year, Jean-Raymond, 32, launched an ongoing series of clothing collections called American, Also, through which he takes a closer look at the whitewashing of American history. The first installment, for fall 2018, was informed by traditional western wear and referenced black American cowboys, including the 19th-century deputy U.S. marshal Bass Reeves, who many argue was the inspiration for the Lone Ranger.

Jean-Raymond encountered Adams’s art during his research for the second iteration of American, Also. While reading up on “The Negro Motorist Green Book” — a guide for black travelers in Jim Crow-era America — Jean-Raymond discovered that Adams, 48, had drawn inspiration from the book for his recent exhibition “Derrick Adams: Sanctuary,” at the Museum of Arts and Design in New York. Adams’s career has spanned nearly two decades and multiple mediums, including collage, painting, performance and video. But what struck Jean-Raymond most was a skill that he and Adams share: Where many people might only see black trauma, both men have a profound ability to recognize the quiet resistance and fearless determination that have defined black history. So, Jean-Raymond proposed a collaboration. 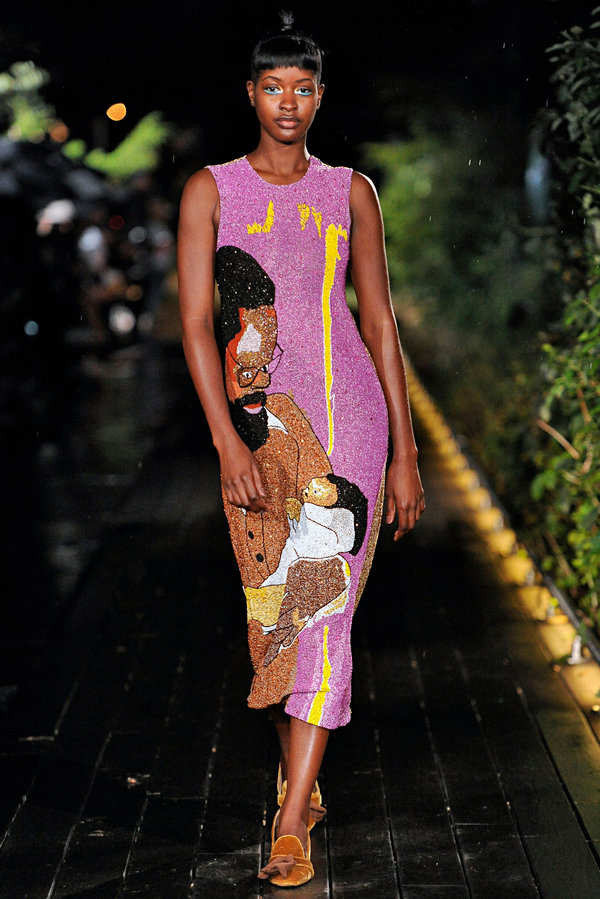 For Pyer Moss’s spring 2019 American, Also collection, Adams created “Family Portrait,” a series of ten paintings based on his old family photographs (some of which are currently on view at the Gordon Parks Foundation). Jean-Raymond then transformed the paintings into richly colored prints. On one striking sleeveless dress, he stitched a tender representation of black love: an image of the christening of Adams’s cousin, made up of hand-applied beads. And last night, two months after Jean-Raymond presented these garments at the Weeksville Heritage Center in Brooklyn, the designer won the prestigious CFDA/Vogue Fashion Fund award.

One afternoon, in late September, Jean-Raymond visited Adams in his Brooklyn studio for a conversation that covered both fashion and art, as well as everyday activism and the need for fuller accounts of black experiences.

KERBY JEAN-RAYMOND: I think we first met at a party at Kehinde Wiley’s house. Then, when I was thinking about the collection, I came across a New York Times story about your work inspired by the “Green Book.” I was struck by the fact that your art is uplifting. When black people are depicted in the media or in art or in music, it’s always these tragic stories. What’s so refreshing about your work is that it’s the opposite of that. So naturally, I hit you up to see if you were interested in doing something with me.

DERRICK ADAMS: During the time we were talking about working together, my sister and I had been doing an ongoing exchange of family pictures. I started telling her to scan the images, which I then made into the paintings which you use in the collection. But the whole concept really came from you and I seeing each other out around New York, and seeing that we were enjoying life and having these great experiences in spaces that were primarily filled with people of color. It was not any conversation necessarily about tragedy or how white people see us.

DA: We exist in a way that I think every race exists. Not separate from trauma, but not defined by it either. In a sense, my whole practice came about because I started really thinking about what we do in our leisure time. Even political activists such as Malcolm X and Martin Luther King — there are archival images of them on vacation. But people don’t know that there are pictures of Martin Luther King in a pool. Those photographs don’t exist as prominent images on Google as much as images of him being imprisoned or protesting. You can’t be in that state of existence 24/7 and be healthy.

KJR: We have to switch that narrative.

DA: The thing that is more accomplishable for us is not to necessarily change the narrative, but to add an alternative perspective.

KJR: Art and fashion are ubiquitous, universal languages, and we have to really be careful about only showing one story. It works against us. It gives people the right to feel bad about us, the right to treat us differently.

DA: You know, when I saw your [spring 2019] runway show, which was the first time I saw my art incorporated into the collection, I was totally blown away. I was really moved by the way that the images were transformed into moving pictures. I haven’t shown my family the works yet. I have to sit them down and present it to them because it will be very moving to them as well.

KJR: The show was held at the Weeksville Heritage Center. It felt like we were having a cookout on sacred land backed by a gospel choir. I always think with these shows that I have you for 15 minutes, and I could either give you more of what the world is giving you or transport you to a world that’s devoid of the angst of racism and bigotry so you can see what the world could be.

DA: Just to think this all grew out of a conversation about the “Green Book,” which speaks to our rich legacies.

KJR: It’s interesting to think about the perverse nature of that book — the fact that we had to have a book, that existed at any point in time in this country, that showed us how to navigate safely, disturbed me. Did it disturb you?

DA: Yes, and so with the “Green Book,” I realized that it was created by a postal worker. He was doing it on his own, he wasn’t getting paid for it. He just saw a need to create this publication. He compiled all the information to assist other black people who were going from one place to another. There’s something to be said about an activist who doesn’t consider himself an activist. I think that’s why I’ve always been interested in quiet activism. When people complain about the conditions of the world, I’m like, “Do you donate your clothes to shelters for black men and women who need clothes to wear to work?”

KJR: I think what we do is also activism.

DA: It’s visual activism. One of the strengths of Western culture and its ability to dominate the world is its interest in and understanding of visual culture. I think coming to understand this in art school allowed me to take a position as an artist. I made the decision to use and subvert those symbols that I’ve been conditioned to accept as art and reality even though they are just constructions of images. The acceptance of those images is a part of the issue that I have mostly with our culture. We don’t have to accept everything. We can investigate and think about how we can, as a people, use some of those things to empower our own beauty. 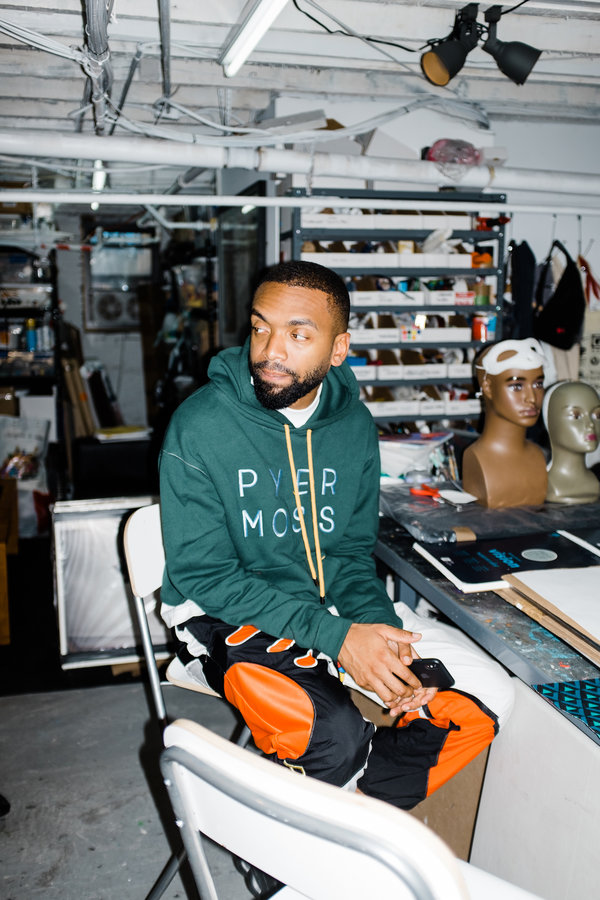 KJR: In my collections, when I look at history and figures like Ota Benga and the black cowboy, it’s about recovering their images from history. I am trying to counter the way they had been represented and relate their images to today. Specifically with the Ota Benga collection, it was juxtaposing his image with the ubiquity of images of Mike Brown and Trayvon Martin. The circulation of their images was very similar to how Ota Benga was stared at while he was locked in a cage at the Bronx Zoo for white entertainment. I am interested in the then and now as a way to think about justice or the lack of it.

DA: I always think about how, to truly be contemporary, we have to be able to show the multidimensionality of who we are. I’m totally encouraging of artists making works that may not necessarily be of my taste that represent blackness in a way that I might not necessarily do it. I always try to keep the process very visible in my work because I really want younger people to look at how images are constructed. It’s like giving them a blueprint to do it themselves.

DA: It’s funny, when people talk about my work, they say it’s so positive, but the fact that we think that showing black people in a normal light is positive is an issue in itself. Until people start seeing more of this representation and knowing more about Victor Hugo Green and the fashion designer Patrick Kelly, we can’t talk about how to really expand the conversation in terms of complexity and diversity within our culture, because we are still grappling with honoring our history.

KJR: That’s why I used the pattern from your Patrick Kelly series in the collection. We could’ve stayed with the family portraits, but the reason I added the Kelly pattern is because of the conversations we are still having about the “first black man to do this, or the first black woman to do that” and overlooking people like Patrick Kelly, Ozwald Boateng, FUBU and Cross Colours, who were the originators, who created space for us. For some reason, we are constantly falling into the trap of talking about firsts. We have a history!

DA: And we should show it! Patrick Kelly would’ve loved to see the woman, in your show, come down the runway with the allover print and the cape like Superman. He was all about drama and glamour. He was always one of the main designers for Ebony Fashion Fair. He was absolutely in the mainstream fashion world, but he still kept a foot in the community.

KJR: That’s why I add little things into my work to inform people that we existed. You know what we wrote on the mood board in the design studio as our takeaway for this collection? We wrote, “Black people like muffins and ‘Seinfeld’ too.” The journalist Wilbert Cooper said that a few years back, and I think of it every time I feel like we’re being misrepresented. That’s the thing I wanted to show: A lot of us are regular, you know what I mean? We get so caught up in tragic or extraordinary circumstances that we forget the regular trailblazers. You don’t have to be extraordinary to be an activist, you just have to care.

DA: Exactly. It’s that simple, you can start right there.